Allen Wadsworth, born in about 1939, had at least two exhibitions in Ajijic in the 1970s and honed his carpentry and painting skills in the village prior to embarking on a long and distinguished career in Hollywood as a set painter and scenic artist for major movies and TV shows.

Wadsworth and his wife Diane are natives of Minnesota and grew up in the Montevideo area of that state. He was always good at art but only decided to pursue his talents in that field after a stint in the U.S. Navy. He spent time in the 1960s and early 1970s studying and painting, including spells in both England and Mexico. A 2014 newspaper piece says that Wadsworth also “enjoyed a stint as the general manager of an art gallery in the smokestack on the Queen Mary.” 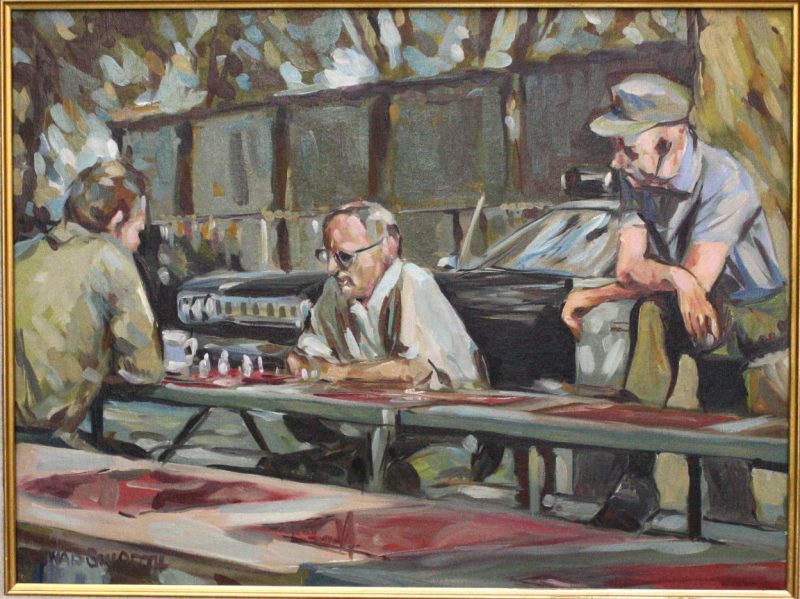 While his precise dates in Ajijic remain unclear, Wadsworth held two exhibitions in the village. The earlier show was held at the gallery-restaurant known as El Tejabán (at Zaragoza #1), then run by Jan Dunlap. That show opened on 20 May 1973 and featured acrylics and oils. The newspaper account described Wadsworth as a watercolorist who had studied at several art schools in the U.S. and exhibited in many galleries.

Three years later, Jan Dunlap had a new gallery in Ajijic, at 16 de Septiembre #9, the Wes Penn Gallery, named for her former artist husband. The exhibit that opened on 21 February 1976 was a two-person show, combining photos by Sylvia Salmi with 14 of Wadsworth’s oil paintings. (It was followed by a solo show of works by Synnove (Shaffer) Pettersen.)

A newspaper interview in 2014 quotes Wadsworth as saying, in relation to Mexico, that “I taught in an art gallery and made frames and after I got back from Mexico a friend hooked me up with the studios as a scenic artist.”

From Ajijic, Wadsworth was apparently thrown into the deep end as a set painter with some of Hollywood’s biggest names. His first project was the 1976 film, A Star is Born, which won Barbra Streisand an Academy Award for Best Original Song. After that, Wadsworth worked on The Outlaw Josey Wales, directed by and starring Clint Eastwood, and released later that year. Working in the era before CGI (computer-generated imagery), all special effects had to be achieved through craftsmanship and skilled painting.

Of all these projects, Wadsworth’s favorite was Hook (1991), the cast of which featured such stars as Dustin Hoffman, Robin Williams and Julia Roberts. In addition to painting the Lost Boys’ treehouse in Neverland, Wadsworth painted the sky and clouds on the nursery walls and the huge, menacing crocodile that falls on Captain Hook in the movie’s final scene. 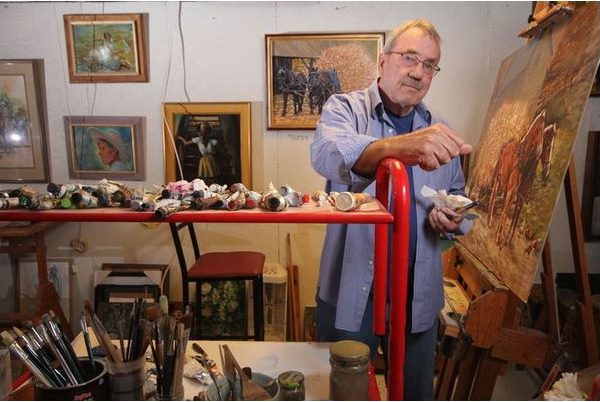 Away from his work on movies (for which he rented accommodation, as and when needed, in Los Angeles) Wadsworth and his wife, Diane, lived with their children in the northern California town of Alturas. Between movies, Wadsworth continued to paint, with occasional gallery shows to sell paintings in northern California, Idaho, Nevada and Washington.

After painting sets and scenery for 25 years, Wadsworth retired with his wife, Diane, to Iowa where he has a studio at Spirit Lake. Paintings spanning 45 years of work were exhibited in his solo show of 21 watercolors and 51 oils, “Paintings by Allen Wadsworth,” at The Pearson Lakes Art Center in Iowa which ran for two months from 17 July 2014.