Victoriano Roa wrote a post-Independence statistical account of Jalisco which includes descriptions and data pertaining to Lake Chapala in 1821-1822.

Relatively little is known about Roa, a politician and writer. It is likely that he was a native of Jalisco, given that the surname is common there. He held various state government posts in the period immediately following Independence, and it was at the behest of the state government that he wrote his Estadística del Estado Libre de Jalisco (Statistics of the Free State of Jalisco). 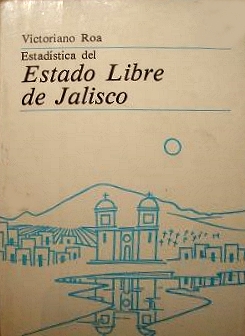 After being turned down for the post of Secretary to the state Congress in 1830, he moved to Mexico City as director of the Banco de Avío, founded in 1830 to promote the development of the wool, cotton and silk industries. This marked the beginning of modern industrial development in Mexico. The Banco de Avío, founded by Lucas Alemán (Foreign Relations Secretary in one of Bustamante’s governments), is recognized as the main precursor of Mexico’s modern commercial banks. The bank was closed by presidential decree of Antonio López de Santa Anna in 1842.

By 1836, Roa was in charge of El Mosaico Mexicano, a journal covering the whole country in which several important articles relating to Lake Chapala were subsequently published, including the lengthy and fascinating piece by Henri Galeotti that forms the basis for this Geo-Mexico post.

Roa died in Mexico City sometime in the middle of the 19th century.

The details, provided by Roa, in his Estadística del Estado Libre de Jalisco, for Chapala – the “Third District” – which stretched from Jocotepec in the west to Poncitlán and Cuitzeo in the east, covered most places on the northern shore. Very few details were provided for places on the south shore.

Following Independence and this account by Roa, published in 1825, several further efforts were made in the 19th century by officials of the state of Jalisco to gather relevant information, primarily in order to better monitor the state’s development. These include studies by Manuel López Cotilla (1843), Longinus Banda (1873) and Mariano Bárcena (1888). While these statistical reports are not as much fun to read as conventional travel accounts, they are a veritable gold mine of useful information.

These short extracts come from the post-Independence statistical account by Victoriano Roa, describing the Chapala region in 1821-1822:

In part of the area of this district is the large lake called Chapala, or sometimes the Mar Chapálico [Chapala Sea]… In its interior is a small island, called Mezcala, which served as an invincible fortress for the old patriots, and afterwards was converted into a prison for the convicts sentenced by the courts of Guadalajara. The Grande river, which will flow into the same lake of Chapala flows by the edge of Poncitlán. In the village of Chapala are several fresh water springs and their currents also end in the lake. There is another in Ixtlahuacán, whose water is sufficient to water the orchards; there are some in the Jocotepec area though not very abundant, and in the Huejotitán hacienda is a very noteworthy dam, because, with only the seasonal rains that it receives, it is sufficient for watering all the area sown in wheat and even for turning the mill. In Atotonilco el Bajo is another dam, whose water is taken from the Grande river, and used to water the fields sown by the village and those of the Atequiza hacienda.

The majority of the inhabitants are dedicated to agriculture, others to the weaving of ordinary lengths of wool and cotton, and some to the cultivation of the orchards and fishing in the rivers and the lake. This produces an abundance of the fish known as whitefish, catfish, sardines, bocudos, popocha [Algansea popoche, endemic] and charales [Chirostoma spp., also endemics], which results in a profitable trade for the villages found on its shores.

Cattle and pigs, although not in abundance; horses, only on the haciendas. The population of the Third District consisted of 4925 married men, 4927 married women. 3062 single males of all ages, 3632 single females and 7 clergymen, making subtotals of 7994 males and 8559 females, for a total population of 16,553.

Note: For the full extract from Roa pertaining to Lake Chapala, see chapter 15 of my Lake Chapala Through the Ages: an anthology of travelers’ tales.