Gabino Ortiz Villaseñor (1819-1885) was a 19th century poet, journalist, lawyer, politician and playwright born in the town of Jiquilpan, Michoacán, on the eastern shore of Lake Chapala prior to that area’s draining for farmland in 1906. Despite the fact that the commemorative plaque on his birthplace (image) gives his date of birth as 18 February 1819, biographers appear to agree that his actual birth date was one day later, on 19 February 1819. Note, too, that his first name is often spelled as Gavino, the letters v and b sharing an almost identical sound in Spanish. 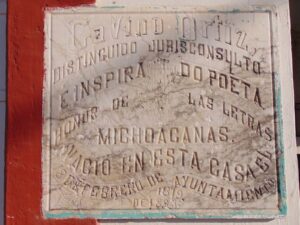 Ortiz studied in Morelia where he became a lawyer in 1845. He then worked in that city as a lawyer until 1847, when he was elected to the Congress. He occupied various public positions over the years. In 1850 he became a Deputy in the State Congress. Affiliated to the Liberal party, he wrote the political paper El Espectro, which came out against the dictatorship of Antonio López de Santa Anna (who served a total of eleven non-consecutive terms as President of Mexico) and later another liberal newspaper, El Sanscalote.

After the 1857 Reform Law was passed, Ortiz became the first head judge of the Civil Registry in Morelia. The following year, he wrote the official newspaper Bandera Roja; he was also a regular writer for the La Bandera de Ocampo newspaper.

Ortiz translated two ecclesiastical leaflets by Lefevre from French to Spanish, which were published in Morelia in 1859 and 1870 respectively. He also translated work by the Latin poet Horace.

Ortiz’s own poetic works (some of them satirical pieces or fables) were published in various newspapers, especially El Colibrí. A collection of his poems appeared in Morelia, with the simple title Versos, in 1873.

Despite his moderate success as a writer, Gabino Ortiz died in poverty in Morelia on 22 May 1885. His memory lives on in Jiquilpan because a local street and the town’s library are named in his honor.

The Biblioteca Pública Gabino Ortiz (Gabino Ortiz Public Library) occupies a former nineteenth century church on the town’s main street (Avenida Lázaro Cárdenas). The building is embellished with two impressive works of art. The beautiful main door, which has bronze sculptures of the heads of 22 of the most outstanding scientists and thinkers of the early twentieth century, was designed by Guillermo Ruiz.

The murals inside the library are the work of famous Jalisco muralist José Clemente Orozco, considered one of the famous “Big Three” of Mexican Muralism, alongside Diego Rivera and David Alfaro Siqueiros. Orozco painted, literally single-handedly (having lost his left hand in a childhood accident) a series of sketchy black-and-white murals depicting political parties and revolutionary Mexico on either side of the former nave and an unusual and striking full-color mural known as “A Mexican Allegory” on the end wall. Painted in 1940, it is one of his last completed works. For more about this mural and the town of Jiquilpan, see chapter 6 of my Western Mexico: A Traveler’s Treasury.