Anne McKeever (1928-2002) was an artist, model, photographer and Beat poet who spent some time in Ajijic during the 1950s and was a close friend of the painter Don Martin and folksinger Lori Fair. Another of McKeever’s closest friends was Jeanora Bartlet, who lived in Ajijic in 1956-7 and later became the partner of American pop artist Rick Reagan. Many years later, McKeever and her husband, a former bullfighter, started an English-language school in Tapachula, Chiapas, and invited Bartlet to teach there. 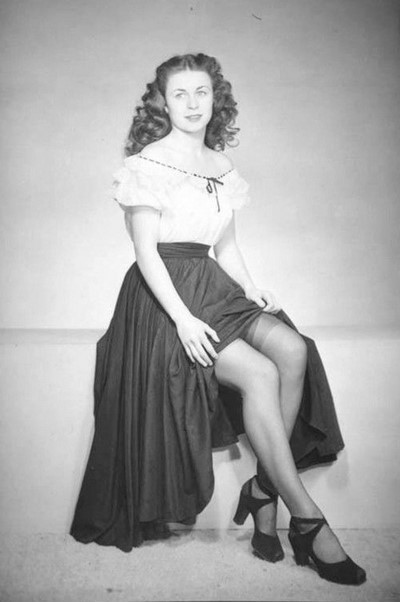 McKeever was born in Middletown, Ohio, on 4 September 1928 and was interested in all manner of artistic activities from an early age. She was a bright student and took extracurricular classes in classical ballet, acting, painting and photography, before attending Teacher’s College in Greeley, Colorado.

In her youth she had been a member of a Chicago dance troupe, “The June Taylor Dancers”, and had done some modeling for advertisements. From Colorado, she went to New Zealand, where she studied in Auckland College and modeled for Christian Dior, Embassy Shoes and other firms. The photographer Clifton Firth (1904-1980) shot many of these campaigns. Sixty years later, ten images of McKeever, all taken by Firth in the 1940s, were included in a major 2003-2004 exhibit in Auckland, entitled “A Certain Style: Glimpses of Fashion in New Zealand”. 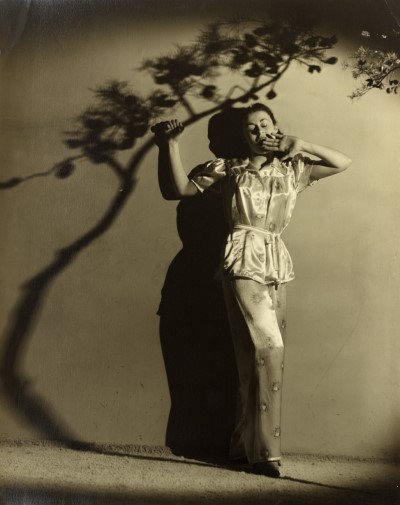 McKeever returned to the U.S. in 1950 to complete her university studies. She became associate professor in the history department at Linfield College in McMinnville, Oregon, and also taught at Newberg High School. After she graduated from Linfield College in 1951, she moved to New Orleans, where she worked as a teacher and in the photographic labs of Greer Studios.

It was in New Orleans that McKeever first met artist Don Martin, artist and folk singer Lori Fair, and artist and jazz musician George Abend. They would meet up again a few years later in Ajijic. Joan Gilbert Martin alerted me to the photograph (below) used for the cover of the second (Summer 1956) issue of Climax, a Beat magazine published by Bob Cass in New Orleans and printed in Guadalajara. The photo, taken by Anne McKeever, shows Don Martin’s studio in Ajijic in 1955/56 with one of his paintings hanging on the far wall. Lori Fair is sitting by the drums and George Abend is at the piano. This image neatly conveys the close friendship of these artistically-talented individuals before their paths, and lives, diverged. 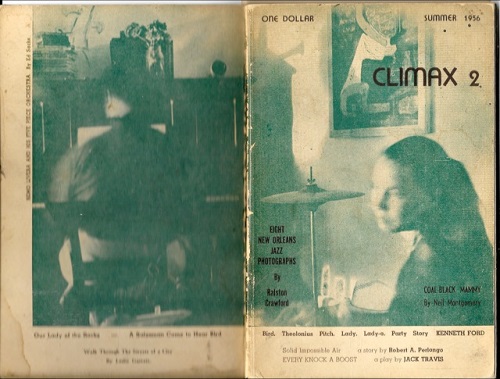 McKeever had left New Orleans for Mexico in 1953 at the invitation of the Instituto Norteamericano de Relaciones Culturales to give English classes in Guadalajara, where she taught at the Instituto Cultural Mexicano-Norteamericano de Jalisco until January 1955. Newspaper articles describe her jovial personality and list her hobbies at this time as painting (watercolors and pastels) and photography.

In January 1955, Anne McKeever left Guadalajara to oversee English teaching in the smaller neighboring state of Nayarit, as Director of the Instituto Cultural Mexicano-Norteamericano de Nayarit. She spent six months there, during which time she arranged two art shows featuring the works of Don Martin. The opening night for the first show, at the Instituto Cultural Mexicano-Norteamericano in Tepic, in April, included a concert of folksongs sung by Lori Fair. The second show, in May in Santiago Ixcuintla and billed as the “Third Painting Exhibition, Mexican and International Artists”, included a painting by Anne McKeever entitled “The Women”. 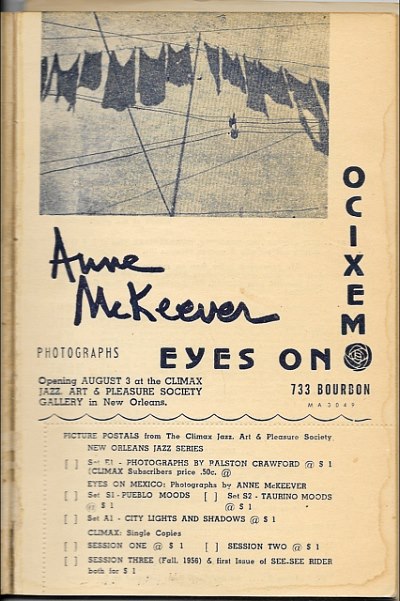 McKeever returned to Guadalajara in the summer of 1955. In September, the Instituto Cultural Mexicano-Norteamericano de Jalisco presented an exhibition of her photographs, described in the local newspaper, El Informador, as a “magnificent collection”. The reviewer praised McKeever an an “American who loves Mexico and its customs” and a “very original photographer”. The photos, taken in Guadalajara and Tepic with a simple camera in natural light, included portraits of people engaged in everyday activities: rotalistas (sign painters), street sellers, children and bricklayers.

A similar exhibition, entitled “Ojos sobre Mexico” (“Eyes on Mexico”) was held in New Orleans the following year at the Climax Jazz, Art and Pleasure Society. A portrait of McKeever on the flyer for her “Eyes on Mexico” series shows her wearing bullfighters’ watches while cradling her camera.

This chronology of McKeever’s life throws some doubt on the very precise time frame claimed by Penelope Rosemont in Surrealist Women: an international anthology that, “A fascinating surrealist-orientated group – including Carol St. Julian (aka Beavy LeNora, the Nevermore Girl) and photographer Anne McKeever – burst onto the scene in New Orleans, Louisiana, in 1955.” Though McKeever retained links to the city, and had poems and photographs published there until 1960, she had left the New Orleans scene two years prior to 1955. Perhaps Rosemont is equating McKeever’s presence in New Orleans with the start of the journal Semina, which ran from 1955 to 1964? 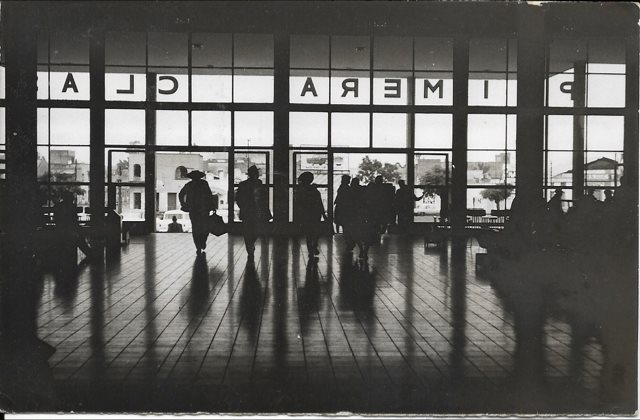 After Guadalajara, McKeever moved to Mexico City where she taught English and renewed her friendships with Lori Fair (now married and calling herself Bhavani Escalante), Jeanora Bartlet and Rick Reagan. McKeever was an integral part of the then-vibrant Beat scene in Mexico City which included surrealist poet Philip Lamantia. McKeever and Lamantia were visited in Mexico City in 1959 by jazz poet ruth weiss, near the end of her lengthy trip through Mexico:

“In 1959, ruth returned from traveling the length of Mexico with her first husband, having completed her journal COMPASS, which includes an excerpt of her memorable meeting with two close San Francisco friends in Mexico City -poet and photographer Anne McKeever and poet Philip Lamantia. After talking all night in a café, they decided to climb the Pyramid of the Sun in the Mayan ruins outside Mexico City and catch the sunrise. Neither guides nor other tourists were there in the predawn chill. The climb to the top of the pyramid was easy, but ruth, paralyzed by fear of heights, had to be carried all the way down.” (Brenda Knight, 2009).

In that same year, 1959, weiss included several short poems about “Ana” (McKeever) in her Gallery of Women, a book comprised of poem-portraits of more than a dozen women poets whom she most admired and respected. Other poets whose portraits were painted in verse by ruth weiss included Aya Tarlow and Laura Ulewicz, the partner of Jack Gilbert.

Weiss also refers briefly to McKeever in her poem “Post-Card 1995”, writing “ANNE McKEEVER vanished in Mexico” and later, “ANNE McKEEVER your poems, your voice, your toreador’s baby where are they”. (This poem also describes Ernest Alexander, another artist closely associated with Ajijic.)

McKeever’s own work featured in the 5th issue of the Beat magazine Semina, published in 1959. Her photographic collage, “Musicians”, appeared in the same issue as an extract from “Compass” by ruth weiss, and a poem and translation by Philip Lamantia. 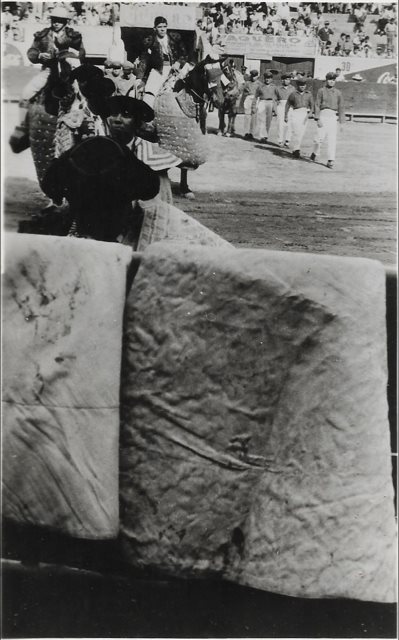 McKeever’s interest in photography continued unabated in Mexico City and led her to document bullfighters and the many activities occurring near the bull ring. She lived with bullfighters, took their photos, and even fought a young bull herself. This is how she first met matador Humberto Javier, the love of her life, the start of an entirely new chapter. Anne had an infant son (Felipe) and, after the couple married, they left Mexico City by train in 1960 to start a new life as a family in Tapachula, Chiapas. Their daughter Ana Andrea was born a couple of years later.

The newly married couple started an English-language school in Tapachula which is still in operation today. The Instituto Cultural de Inglés Javier McKeever was the first English language school in Chiapas and is now run by McKeever’s grandsons: Oliver and Lester Trujillo Javier, who have English teaching degrees. McKeever taught English there for more than forty years, becoming known locally as “Teacher McKeever”.

In about 1970, McKeever invited Jeanora Bartlet, then living in California, to teach at the school. Bartlet moved to Chiapas and lived there with her partner Rick Reagan for more than a decade, teaching English part-time. Reagan’s artwork was regularly displayed in the school.

McKeever’s daughter, Ana Andrea Javier McKeever, trained as a teacher of classical ballet before starting a school in 1979 for classical ballet, jazz and tap. It is now called the Royal Ballet Center, and is run by Ana Andrea’s own daughter, Andrea Trujillo Javier. The family has also opened a language center for Spanish courses: The Anne McKeever Language Center.

Anne McKeever, “Teacher McKeever”, died in Tapachula, Chiapas, on 14 July 2002, but the family’s numerous contributions to enriching the cultural life of Tapachula will live on for many years to come.