Gordon Gammack was an Iowa newspaper reporter and columnist. During his 40-plus years working for The Des Moines Register and Tribune he covered three major wars – World War II, Korean War and Vietnam War – as a war correspondent.

Late in life in the early 1970s, he visited Chapala and wrote a couple of newspaper pieces about the area. The first focused on the places, including Lake Chapala, where Iowan individuals and couples had chosen to retire. The second piece looked at the downside of living in “Shangri-La” as Gammack christened the northern lake shore.

Gammack, the son of an Episcopalian pastor, was born in Lenox, Massachusetts on 31 May 1909 and died on 18 November 1974 in Des Moines, Iowa. 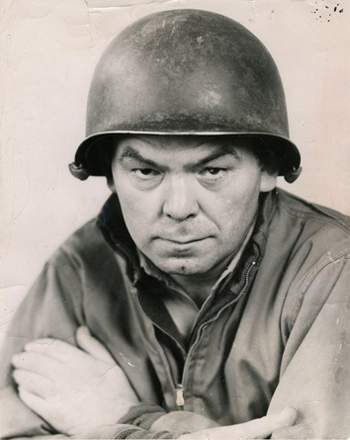 After graduating from Kent School, Connecticut, where he wrote for the Kent School News, he attended Harvard University and then began work as a reporter for the Hartford Courant in Connecticut. A friend of his older brother, Tom, arranged for him to join The Register and Tribune in 1933, during the Great Depression, when jobs were hard to come by. Gammack never looked back. He began by covering crime and sports, then moved on to state politics. Fellow reporters considered Gammack a natural – someone who could walk into a strange town and “three stories would run up and jump into his pocket” as one of his colleagues put it.

During World War II he became a foreign correspondent for the newspaper and followed Iowans serving in the armed forces in North Africa, Italy, France and Germany, often sending personal notes home from front-line soldiers to their families. He was with the American forces that liberated Paris.

After the was Gammack became a columnist. His evening Tribune column usually appeared in the left-hand column of page one. 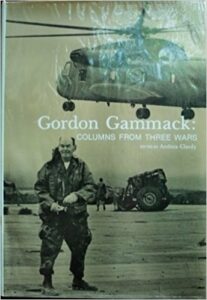 During one of several visits to Korea during the Korean War, Gammack witnessed the first exchange of sick and wounded prisoners of war. He secured an exclusive radio and TV interview with Iowan Richard Morrison, the first American soldier released.

Gammack also covered the Vietnam War and won a National Headliners Club Award for his series of articles about Michael Kjome of Decorah, Iowa, who had been held as a prisoner of war.

A collection of his war columns, edited by Andrea Clardy, was published in 1979 as Gordon Gammack: Columns from Three Wars.

In 1971, Gammack visited Chapala during his research to write and photograph Iowans for an article entitled, “Where Iowans find pleasure in retirement”. In the article, Gammack describes how, “two former Tama residents, Mr. and Mrs. Ben Morris, find retirement pleasant in Mexico. Domestic help there is so inexpensive that the Morrises have two gardeners and two cook-maids at their magnificent home near Lake Chapala, south of Guadalajara.” He also photographed “Harold Stillwell, formerly of Malcom, and Mrs Stillwell” in their garden overlooking the lake.

A couple of months later, Gammack penned “The Trouble with Shangri-La” which looked at the downside of living at Lake Chapala. Noting, first, that a home that cost $50,000 to build in Des Moines would cost less than half that to build in Chapala, Gammack lists some of the many disadvantages, as he sees it, of retiring to live in Mexico, and, in particular, at Lake Chapala: the loneliness of expatriation, the “formidable separation” from children; the Napoleonic system of justice; the “high percentage of extreme right wingers and racists among the Americans in the area”; the loss of Medicare; the lack of telephones; the danger of contaminated water; the inferiority of local beef; the erratic mail service; “almost no worthwhile U.S. TV or radio programs”; problems with language.

Gordon Gammack died of lung cancer at the age of 65. One of his daughters also became a columnist for The Des Moines Register.