Orley Allen Pendergraft was born in Arizona on 12 May 1918. He worked as a school teacher for many years and was ordained as a minister prior to deciding to dedicate himself to art.

Even before he completed college, Pendergraft had made several visits to Mexico, usually to Rocky Point (Puerto Peñasco) on the Sea of Cortés. He painted in Mexico for the first time in 1940 and spent part of 1951 in Ajijic on Lake Chapala. After 1959 he became a regular visitor to the town of Álamos in Sonora, establishing his permanent home there in the mid-1970s and living there for more than thirty years until his death on 22 November 2005.

His first one-person show was apparently in “the Guadalajara area”, but it is unclear whether this refers to a show in Tlaquepaque, for example, or to a location on Lake Chapala.

Pendergraft, “a native Arizonan of Cherokee and Anglo descent”, was born on his father’s dairy farm near Mesa and displayed artistic talent from a young age, winning an Arizona Republic art contest at the age of twelve. He also picked up street Spanish from the farm’s Mexican workers. He graduated from Phoenix Union High School and won an art scholarship to Carnegie Institute, but chose to remain in Arizona and, in 1938, entered the Arizona State Teachers College (now Northern Arizona University) at Flagstaff.

His mother insisted that he postpone his intended career as an art teacher and instead study for the priesthood in the Episcopal Church, so Pendergraft next attended a seminary in Arkansas from which he graduated with a Doctor of Divinity degree. He was ordained as an Episcopal minister on 21 December 1943 by Bishop Block of California in Grace Cathedral, San Francisco.

By 1949, Pendergraft had been assigned to, and was teaching in, the diocese of New Jersey. In March of that year, he married a French nurse, Eleanor Madeleine Langpoop. This was also the year when he joined the Graphic Sketch Club in Philadelphia and decided to renew his art education by enrolling in the Fleisher Memorial Art School in Philadelphia. At some point in his career, Pendergraft also studied at the Pennsylvania Academy of the Fine Arts (Philadelphia) and at the Art Students League in New York, where he had worked as a free-lance commercial artist for Young and Rubicam Advertising. Pendergraft had also spent a year in Europe, mainly in Paris and Spain.

By 1951, Pendergraft and his wife were living in Mount Hermon, California. The Santa Cruz Sentinel for 28 September 1951 reports that one of Pendergraft’s landscape paintings – Ajijic on Lake Chapala, Mexico – has taken the “coveted silver bowl” at the county fair for gaining first place in the watercolors landscape class, and that one of his oil paintings – a still life – had also won a first place award. 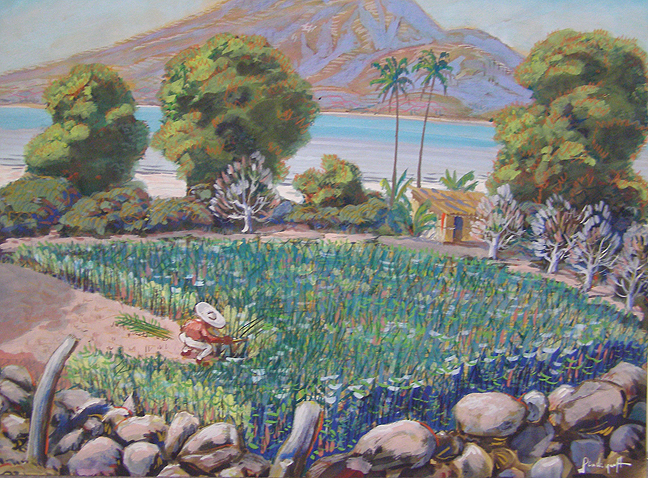 This Ajijic painting (above) dates from that time and is currently listed for sale at Figureworks, a gallery in Brooklyn, New York.

From 1953-63, Pendergraft exhibited exclusively with the Artists Guild of America, Inc., both in Carmel and in their traveling exhibitions in Los Angeles, San Francisco, Chicago and New York. Pendergraft was also invited to participate in an exhibit entitled “Sixty Living Americans”, held in New York and Miami. Pendergraft’s agent was art patron Joanne Goldwater. [By coincidence, Joanna Goldman used to reside at least part-time in Ajijic, and her father – former U.S. senator Barry Goldwater – exhibited photos of American southwest landscapes at the Centro Ajijic de Bellas Artes (CABA) in January 1998.]

Sadly, in 1959, Eleanor contracted an antibiotic-resistant form of tuberculosis and died shortly afterwards. The church granted Pendergraft early retirement and a pension, giving him the freedom to focus on his art. For many years, he divided his time between studios in Sedona, Arizona, and Álamos, Sonora.

According to the post “Allen Pendergraft” in the Álamos Interviews series published on the Álamos History Association website,

“Immediately after his wife’s death, though, and in a state of depression, he went to Mexico intent on drinking himself to death. Fortunately for him, the drinking only made his sick! He was out of money at a hotel in Southern Mexico, so the owner gave him a job tending the cash register at the hotel bar. While at work he met the playwright Tennessee Williams, who was looking for a location for a play he intended to write. Allen took Williams to Puerto Vallarta, then a small, sleepy fishing village, and Williams proceeded to write “The Night of the Iguana,” putting Allen in the play as the alcoholic priest. Allen was not pleased with the characterization!”

This wonderful story may have some truth to it. Williams completed the play, based on his 1948 short story of the same name, in 1961, and the famous movie version, starring Richard Burton, was released in 1964, so the time frame is about right. However, the Wikipedia entry about the play claims that, “The Reverend T. Lawrence Shannon was partly based on Williams’ cousin and close friend, the Reverend Sidney Lanier, the iconoclastic Rector of St Clement’s Episcopal Church, New York.” It is of course perfectly possible that the character of the drunken defrocked priest is based on both men. [Note that Williams himself had spent the summer of 1945 in Chapala working on a play provisionally called The Poker Night,.]

Pendergraft’s religious training and art education came together in the mid-1950s. From 1956 to 1967, he worked, in association with his cousin Peter Carroll, on the liturgical arts commission in California, designing stained glass windows, murals and church furnishings in glass, mosaics and wrought iron for churches in many communities, including San Francisco, Oakland, Orinda, Sacramento, Portola Valley, Santa Clara, Pebble Beach, Carmel, Pasadena, Laguna Beach and San Diego.

According to a newspaper piece in 1972, by which time he was becoming very well known as a painter of western landscapes, Pendergraft’s work was being exhibited “in La Posada and the Wesley Gallery in Sedona, Scottsdale’s Blue Flute and Saddleback Inn in Phoenix”.

Pendergraft was a member of the Artists Guild of America and his work won numerous awards in regional shows and fairs in California, as well as a first place in the New Jersey Summer Art Festival (Cape May). His oils and watercolors can be found in museums in New Jersey, Arizona and Massachusetts, and in private collections throughout the U.S.

Pendergraft wrote a family history entitled Pendergrass of Virginia and the Carolinas: 1669-1919, published in Sedona in 1977, and contributed the pen and ink drawings used to illustrate Ida Luisa Franklin’s Ghosts of Alamos, first published in 1973.

Pendergraft sold his Sedona house and moved full-time to Álamos in the mid-1970s. Most of Pendergraft’s paintings in Álamos were small enough to fit in a suitcase, and inexpensive enough ($25) to appeal to the tourists he met on the plaza. He did also paint some large canvasses, one of which is in the town’s Museo Costumbrista de Sonora.

When his failing eyesight brought an end to his painting career in the mid-1990s, Pendergraft was cared for by a local couple. After the husband’s death, and concerned about the financial future of his widow, Pendergraft married her not long before his own death in order that she could benefit from his social security, pensions and estate.