Archaeologist Betty Bonita Bell and her husband William W. Winnie Jr. (1928-1988) lived at Calle Colón #36 in Ajijic for several years in the early 1970s. While the precise dates are unclear, the couple made many significant contributions to village life.

Bell gained a doctorate in archaeology at the University of California, Los Angeles (UCLA) and then worked for the Organization of American States in Washington D.C. She later returned to UCLA and established a regional development training program in Brazil.

She and her husband arrived in Jalisco in 1970 when he accepted a position as visiting professor in the Economics faculty of the University of Guadalajara.

In February 1971, Bell gave a series of lectures in Guadalajara. The local newspaper described her at this time as “a temporary resident of Ajijic” and said she was a “former assistant professor of anthropology at Colorado State University (Fort Collins) and currently adjunct professor of anthropology of the University Museum, Southern Illinois University.” The following month, the same newspaper reports that she anticipates being in Ajijic “at least two years” and is considering settling in the village.

In that same year (1971), Bell and her husband were instrumental in founding the Sociedad de Estudios Avanzados del Occidente de México, A.C. (West Mexican Society for Advanced Study) in Ajijic. The prime purpose of this short-lived project, which closed in 1974, was to encourage the participation of foreign archaeologists in Mexican projects. 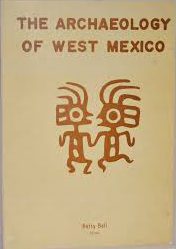 The society’s two main publications were Betty Bell’s El Gran Xalisco: La Historia Cultural del Occidente de Mexico (which had photos and design by  Wm. W. Winnie) in 1972 and The Archaeology of West Mexico, a collection of papers she edited in 1974.

Bell and her husband also organized a summer school for visiting students in 1974. According to the Guadalajara Reporter, 25 students from Angelo State University in San Angelo, Texas, spent three weeks at Lake Chapala taking college-level classes for credit. The classes, coordinated by Winnie and his wife, were given by Angelo State faculty members Caroline Haley and Tony Dutton, and included Spanish-language classes connected to Mexican civilization and literature, as well as classes about the anthropology of pre-Columbian cultures in Western Mexico.

Further details of Betty Bell’s life have proved frustratingly difficult to find though, tragically, it seems that Betty Bell lost her life in a car accident in Ajijic.