The earliest known reference to Lake Chapala in a poem must surely be that made by Bernardo de Balbuena (1562-1627) in El Bernardo, written between 1592 and 1602, published in Madrid in 1624. The poem took a decade to write because of its extraordinary length—some 40,000 octavo reales (Royal eighths) in size! 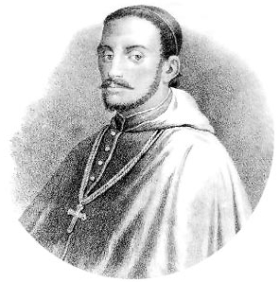 Balbuena was born in Valdepeñas, Spain, in 1562. In 1584, at age 22, he crossed the Atlantic to join his father, who owned properties in New Spain. This was only 63 years after the conquest, but already various cities had been founded and were beginning to prosper.

Balbuena was already a prizewinning poet by the time he was named Chaplain of the Audiencia of Guadalajara in 1592. He later lived for several years in the small isolated village of San Pedro Lagunillas near Compostela, close to Tepic. In 1593, he wrote Grandeza mexicana, a poem which appeared in book form in 1604, and was dedicated to Doña Isabel de Tobar y Guzmán, with whom he was in love.

Balbuena returned to Spain in 1606 and was never to set foot again in New Spain, despite having fallen in love with the country and having become a “Mexican” poet. In 1608, he published Siglo de Oro en las selvas de Erífile, a pastoral novel. In 1626, he became Bishop of Puerto Rico, dying there the following year.

In El Bernardo, the author begins by describing France and Spain. By Book XIII, he is describing Asia. Then (Book XV), he overflies Europe. The descriptions of imagined aerial trips are supposedly the best passages of the entire work, with the highlight being Book XVIII which sees the magician Malgesí flying over America, from Patagonia in the south to the northern edge of New Spain.

Numerous places are mentioned, including the Andes, Brazil and Chiapas, as well as Zacatecas, Guadalajara and the erupting volcano of Jala, before Chapala gets its moment of fame:

Come, between the fresh Pánuco and Gualulco
to Tlaxcala, and the Mexican kingdom,
to Michoacán, Colima and Acapulco
the town closest to the southern sea,
the villages of Quiseo and Tlajomulco,
and in their environs and flower-filled plain
the abundant lagoon of Chapala,
which equals the Ocean in depth and breadth.

Spanish-Mexican philosopher Ramón Xirau describes Balbuena as a “splendid poet who should be remembered and, above all, re-read.” However, reading (or re-reading) 40,000 octavo reales might well be more than most people have time for!

[Extract from “Lake Chapala—as large as an ocean?”, chapter 7 of Lake Chapala Through the Ages: an anthology of travellers’ tales]