Charles Bernard Nordhoff (1887-1947), best known as co-author of Mutiny on the Bounty, has several connections to Mexico, having spent his childhood, and learned to hunt, sail and fish, on  his family’s ranch near Todos Santos in Baja California. Having gained an undergraduate degree, he returned to Mexico, to work as a supervisor on a sugar plantation in Veracruz and fell in love with the plantation owner’s beautiful daughter. He visited the Chapala area in November 1909, writing up his bird-watching notes more than a decade later for Condor Magazine:

“The fresh water marshes of Lake Chapala, in the state of Jalisco, Mexico, form another haven for waterfowl. At one end of the lake there is a great area of flooded land cut by a veritable labyrinth of sluggish channels, 400 square miles, I should say. The far interior of this swampy paradise, reached after three days’ travel in a native canoe, is a vast sanctuary for wildfowl, a region of gently rolling damp prairies, set with small ponds, and traversed by a network of navigable channels leading to the great lake. I saw as many geese, White-fronted (Anser albifrons) and Snow (Chen hyperboreus), as I have ever seen in the Sacramento Valley, and the number of ducks was past belief, with some interesting species like the Masked and Florida Black or Dusky, to lend variety.”

Nordhoff was born in London, England, to well-to-do American parents.The family moved to Berlin, where his mother wrote in the family diary that, “Charlie undoubtedly began his study of water fowl, as his daily outing in a small pram or push cart led him first to the bakeries for a supply of stale buns and back to the lake to feed the ducks.” Following several years living on the ranch near Todos Santos, the family moved to California. Following in the footsteps of his grandfather, a journalist and author, Nordhoff wrote his first article, for publication in an ornithological journal, at age fifteen. 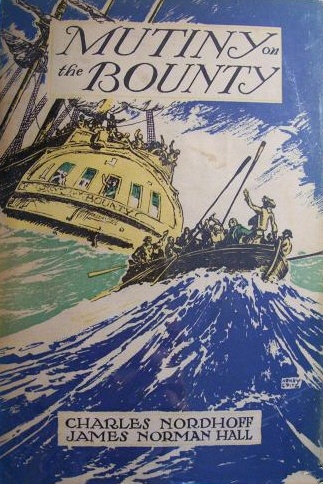 He studied briefly at Stanford University, but left in the aftermath of the serious earthquake and fire of 1906. After completing a B.A. at Harvard University in 1909, he returned to Mexico, to work on a sugar plantation in Veracruz. Unable to win the heart of the plantation owner’s beautiful daughter, with whom he fell in love, and with the Mexican Revolution breaking out around him, Nordhoff left Mexico in 1911, and never returned.

In 1917, Nordhoff joined the French Foreign Legion as a pilot, eventually winning the Croix de Guerre for his efforts. After the war, he wrote a history of the Lafayette Flying Corps. with James Norman Hall (who later updated the long-established and classic traveler’s guide to Mexico  Terry’s Guide to Mexico). The two men later moved to Tahiti to write travel articles for Harper’s, where Nordhoff married a Polynesian woman, Pepe Teara; they had six children.

In the 1920s Nordhoff wrote three novels. Picarò (1924) was based on his flying experience and life in Paris; The Pearl Lagoon (1924) and The Derelict (1928) were both semi-autobiographical. However, Nordhoff is best known for his collaboration with Hall on the Mutiny on the Bounty trilogy about the famous 1789 mutiny in the South Seas. The novel was the basis for three movie versions, the first of which, released in 1935, won an Oscar for Best Picture.

Nordhoff and Hall published six more co-authored novels, several of which were made into movies, but none came close to emulating the success of Mutiny on the Bounty. Tragically, following a severe depression and heavy drinking, Nordhoff took his own life on April 10, 1947.

This is a lightly edited extract from my Lake Chapala Through the Ages, an Anthology of Travelers’ Tales (Sombrero Books, 2008)