One of the earliest films related to Lake Chapala is the silent movie La gran noticia. Most of the film was shot in studios in Mexico City but some parts were shot on location in the town of Chapala in the summer of 1921. 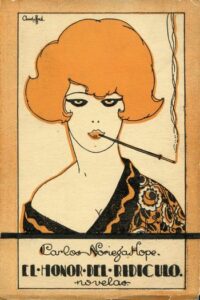 The director (and co-screenplay writer) of La gran noticia was Carlos Noriega Hope, a Mexican journalist, author and director who was in charge of the print magazine El Universal Ilustrado from 1920 to 1934.

[Note: In the absence of any image from La gran noticia, the illustration to the left is the cover of one of Noriega Hope’s novels.]

La gran noticia is the story of an adventurous reporter who is given a month’s vacation in Chapala by his editor on condition that he investigate the crimes of a local gang. In Chapala, he meets and falls in love with a beautiful French woman. In his pursuit of her he confronts and kills a mysterious criminal.

The screenplay was written by Noriega Hope and Marco Aurelio Galindo.

Carlos Noriega Hope (1896-1034) studied law before becoming a journalist. One of his early assignments was to visit Hollywood and report on the nascent cinematographic industry there. He wrote several books as well as the screenplays for Santa (1932) and Una vida por otra (1934).

Beckway was a pioneer in the art of cinematography, credited with inventing one of the world’s first portable video cameras. In 1921, The American Cinematographer reported that, “Mr. Beckway, who is not only an artistic cinematographer of long experience, but an expert mechanical engineer, has built a perfect motion camera that not only photographs but develops and projects and the entire apparatus, tripod and all, can be carried in a small suit case.”

Work on the movie La gran noticia was completed in 1922 and the film premiered in Mexico City on 15 January 1923.

We welcome comments, corrections or additional material related to any of the writers and artists featured in our series of mini-bios. Please use the comments feature at the bottom of individual posts, or email us.