When American travel writer Harry Franck hiked from Atequiza station to Chapala in 1912, he finally arrived just as night was falling. The Mexican Revolution was underway and some of the local hotels had been closed for several months; others had already shuttered their doors.

“once in the cobble-paved village I must pay high in the “Hotel Victor”— the larger ones being closed since anarchy had confined the wealthy to their cities — for a billowy bed and a chicken centuries old served by waiters in evening dress and trained-monkey manners. The free and easy old casa de asistencia of Guadalajara was far more to my liking. But at least the landlord loaned me a pair of trunks for a moonlight swim in Lake Chapala, whispering some secret to its sandy beaches in the silence of the silver-flooded night.”

“Waves were dashing high at the foot of the town in the morning. Its fishermen are ever fearful of its fury and go to pray for a safe return from every trip before their patron St. Peter in the twin-spired village church up toward which the lake was surging this morning as if in anger that this place of refuge should be granted its legitimate victims.” 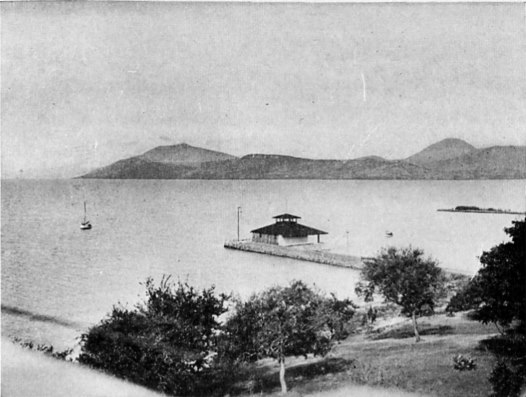 Because of the stormy conditions, Franck decided it was wiser to hike back to Atequiza, rather than risk taking an open boat to the Ribera Castellanos hotel near Ocotlán. From Atequiza, he took a train to Ocotlán:

“From Ocotlan station a broad level highway, from which a glimpse is had of the sharp, double peak of Colima volcano, runs out to Ribera Castellanos. Sam Rogers was building a tourist hotel there. Its broad lawn sloped down to the edge of Lake Chapala, lapping at the shores like some smaller ocean; from its verandas spread a view of sixty miles across the Mexican Titicaca, with all vacation sports, a perennial summer without undue heat, and such sunsets as none can describe. The hacienda San Andres, also American owned, embraced thousands of acres of rich bottom land on which already many varieties of fruit were producing marvelously, as well as several mountain peaks and a long stretch of lake front. The estate headquarters was like some modern railway office, with its staff of employees.”

After a couple of nights at Ribera Castellanos, Franck took the hotel launch across the lake to La Palma, from where he hiked towards Sahuayo and into Michoacán. 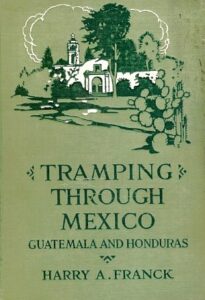 Harry Alverson Franck (1881-1962) was one of the foremost travel writers of the first half of the twentieth century, often taking temporary employment to help finance the next stage of his trip. Franck was a prolific writer, turning out some thirty travel books in a very productive life, including volumes on Mexico, Spain, Andes, Germany, Patagonia, the West Indies, China, Japan, Siam (Thailand), the Moslem World, Greece, Scandinavia, British Isles, Soviet Union, Hawaii and Alaska.

Franck served his country in both world wars. In the first world war, he was a Second Lieutenant with the American Expeditionary Forces in Paris. When the second world war began, Franck was urged by his friends to rejoin the army, “to teach geography to generals.” Franck signed up on June 15, 1942, and was made a General.

During the latter stages of his life, Franck lectured on board cruise ships touring the Caribbean, South America and the Mediterranean.

Tramping through Mexico, Guatemala & Honduras: Being the Random notes of an Incurable Vagabond was Franck’s fourth book. It was dedicated to the “Mexican peon – for emancipation”. Franck entered the country in 1912 armed with a “vest pocket automatic so much in vogue in advertising pages that season”, and with the clear intention of trying to see and experience everything possible within a short time, by foot and by horseback, from schools to jails, from cemeteries to mines.

Because of his direct contact with ordinary people, Franck’s descriptions of their customs, dress and personalities usually carry some authority. For instance, he provides a detailed account of a mine in Guanajuato, and its workers, based on when he worked there as an overseer. But, as one contemporary reviewer pointed out, “Franck is always too hurried. We are very conscious of the forced marches, of the early risings, of the day-long, perspiring tramps. He is fond of calling himself a vagabond, an idler, a tramp, but that is just what he is not.”