The earliest commercial movie to include footage of Lake Chapala was almost certainly the silent movie El Escándalo (1920), based on English writer Cosmo Hamilton’s novel Scandal (1917).

El Escándalo was directed and produced by Alfredo B. Cuéllar. Cuéllar had studied law and economics at UNAM before working as a journalist. He owned the ABC shoe store in Mexico City. In 1921 he founded the National Charro Association. Cuellar headed the Mexican delegation to Paris for the 1924 Olympics in that city. 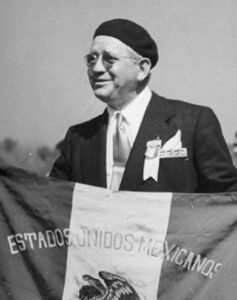 The opening credits for El Escándalo show that the movie was intended to highlight the best of Mexico’s national life: high society, clubs, outings, sports, historic buildings, lakes, rivers and scenery. Parts of the film were shot in Guadalajara and surrounding areas, including Juanacatlán Falls and Lake Chapala, in May 1920.

The plot is a love story centered on Ana María, the beautiful, spoiled daughter of a formerly wealthy father who hopes to restore his family’s fortunes by marrying her off to a rich engineer of English heritage who has just increased his fortune by finding oil off the coast of the Gulf of Mexico.

However, Ana María, who lives in Mexico City, has fallen in love with a penniless sculptor, Armando Baltazar, whose exploits help fill the pages of the local weeklies. Baltazar sculpts a bust of Ana María as rumors swirl about their relationship. When she is seen one night entering the hotel where he has his studio, she lies that she is on her way to see the engineer who happened to be staying there.

Given her family’s misfortunes and the looming potential scandal, Ana María feels no option but to marry the engineer despite the fact that she doesn’t love him. The newlyweds endure a “cold and hostile” honeymoon – in Guadalajara, at Juanacatlán Falls and in the “Hotel Villa Niza” in Chapala – before returning to live in Mexico City.

Meanwhle, Baltazar’s bust of Ana María has won him a major art prize.

The ten-reel film, starring Emilia Ruíz del Castillo as Ana María, best known for her role in an earlier silent movie, Alma de sacrificio (1917), premiered in Mexico City on 12 March 1921 and was first shown in Guadalajara three months later. While it was generally liked by the press, it did not do well at the box office.