Edward Percy Moran was born in Philadelphia in 1862 and died in New York City in 1935. He was born into an extremely artistic family. His father, Edward Moran was one of three siblings – Edward, Thomas and Peter – who were all born in the U.K. and became well-known artists in their time, as did Thomas’s wife, Mary, and various other relatives.

Edward Percy Moran studied with his father and took formal art classes at the Pennsylvania Academy of Fine Arts and the National Academy of Design. He also studied in Europe (London and Paris) before returning to New York, where he eventually established his studio at East Hampton on Long Island.

Moran painted in the realist style and tended to specialize in historical subjects but also painted portraits and landscapes and became known for his etchings. His work was shown frequently at the National Academy of Design and the Brooklyn Art Association from 1861 to 1899. In 1886, he won a prize at the National Academy of Design and in 1888 he received a gold medal for a work shown at the American Artists Association in New York City.

Among the works shown in exhibition were at least two paintings of Chapala. A watercolor entitled “The Market Place, Chapala” was shown at the 1905 Boston Art Club fine arts exhibition and another watercolor, “Old Church, Chapala, Mexico,” was included in the catalogues of both the Forty-Ninth and Fiftieth Annual Exhibitions of the American Water Color Society (held in 1916 and 1917 respectively) at the Galleries of the National Arts Club. That particular painting was priced at $125. 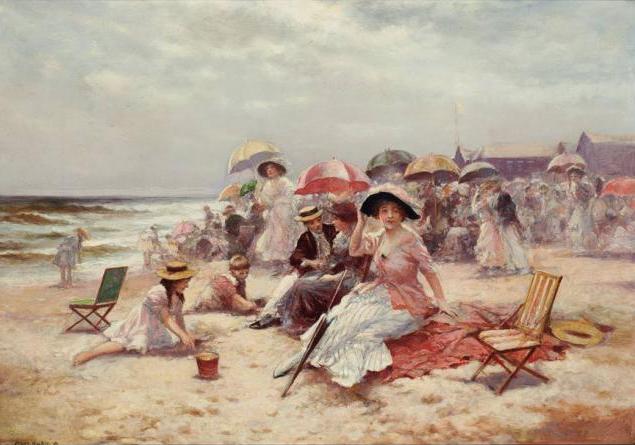 This image of the beach at East Hampton, dating from 1916, gives a good idea of Moran’s realist style, strength of composition and sense of color.

It is unknown precisely when Moran visited Chapala or whether he visited on more than one occasion. If anyone has an image of any of Moran’s paintings of Chapala, please get in touch!

Moran was a member of the American Water Color Society from 1885 until his death. Examples of his work can be found in many prominent collections in the U.S., including the Wilstach Gallery in Philadelphia, the Masonic Hall in Chicago, Plymouth Museum, and at Hamilton Club in Brooklyn.