Wes Penn, a highly creative visual artist, lived in Ajijic from 1967 to his death in a vehicle accident three years later. Penn was the fourth husband of Jan Dunlap (“Big Mama”).

William Wesley Penn Jr. was born 11 February 1935 in Big Spring, Howard, Texas. He was the son of the Reverend and Mrs. William W. Penn. Reverend Penn (1913-1988) was a Methodist minister who served in the Navy and was the pastor for a time in Renner, Texas, where, coincidentally, Jan Dunlap spent most of her childhood.

Penn attended high school in Commerce, Texas, and gained his first degree from East Texas State College (now known as Texas A&M University–Commerce) in 1959, and had married while living in El Paso, where he was studying for a Masters in Education at the University of El Paso. His younger brother, Paul, an engineer also studied at the University of El Paso. Paul later fell foul of the law in Mexico and was sentenced to a multi-year term in Puente Grande, the penitentiary just outside Guadalajara.

Dunlap met Wes Penn when they were both studying at the University of Texas. They lived in El Paso and New Mexico before deciding to try their luck in Mexico where Penn had friends who lived at Lake Chapala. In the run-up to the 1968 Mexico City Olympics, language teachers were in demand and Dunlap, who had four young children in tow, and Penn hoped to support themselves by teaching English.

The family lived for a time in the Mill House at the western extremity of the village. It was difficult to make ends meet and, like many others living in Ajijic at the time, Penn and Dunlap decided to risk driving a stash of weed across the border in order to raise some much-needed funds. They made it back to Ajijic without incident but when Penn went to collect their dog from a friend’s house in Chapala, the timing turned out to be disastrous.

No sooner had he arrived than the police raided the house looking for drugs; everyone present, including Penn, was arrested and locked up overnight in the local jail. Dunlap, meanwhile, had sent son Ricardo to look for her husband. Ricardo returned saying he’s found Penn’s car and that it was still parked in Chapala.

When Dunlap went to collect her husband the following day, she was told that the federales had taken over the case and had moved Penn and the others to Guadalajara. It turned out that they were being held in the same jail as Penn’s brother. Dunlap called in a favor from a friend who had the ear of the state governor and was able to get Penn and the others released in exchange for a substantial contribution of pesos. 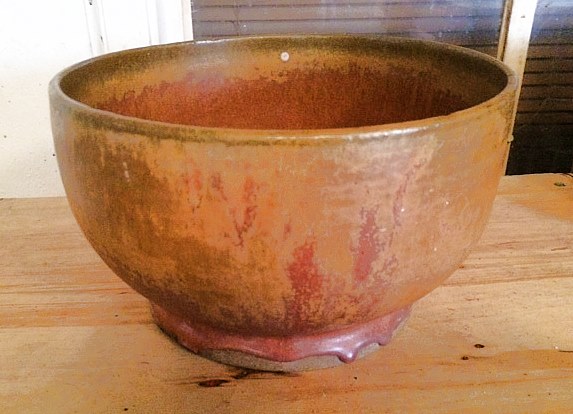 Tragically, Penn was killed on 25 March 1970 when the car he was driving was hit by a bus on the Chapala-Guadalajara highway. Jan and her children remained in Ajijic where she ran a succession of restaurant-bars, boutiques and galleries during the 1970s and 1980s, one of which was named the Wes Penn Gallery in his honor.

Wes Penn worked in a variety of media. As a painter, he specialized in abstracts, many of which leaned towards surrealism.

Penn’s parents were not very appreciative or supportive of their son’s art. Dunlap told me how her father-in-law had once offered her husband $100 for a painting on the grounds that it represented the cost of the materials!

Fortunately, Penn’s fellow artists held him in much higher esteem. For example, his works were exhibited at least once in the renowned Udinotti Gallery in Scottsdale, Arizona, run by Greek-born poet and painter Agnese Udinotti.

I am deeply indebted to the late Jan Dunlap for sharing her knowledge and memories of Wes Penn, and to Rico Semple for sharing photos of examples of his work.