Lucius Seymour Bigelow Jr. (1900-1978), an artist known for his fine watercolors, spent part of his three years roaming Mexico in the 1960s at Lake Chapala. While in Mexico, he held solo exhibitions at the Instituto Mexicano-Norteamericano in Mexico City and at the Casa de Cultura in Guadalajara, which included paintings of Lake Chapala.

Remarkably, about the only visual evidence related to Bigelow, aside from the press photo of him reproduced near the end of this post, is a postcard of Chapala sent by his wife in 1967 to a close friend, Mrs Louise Hallowell, in Cheyenne, Wyoming. Hallowell was the daughter of pioneer photographer Joseph E. Stimson, and helped, a few years later, to ensure that Cheyenne’s Atlas Theatre was included on the U.S. National Register of Historic Places.

The postcard is a typical view of the beach just west of the pier, looking toward Ajijic. The photograph was taken by Manuel Garay and the card was published in Mexico City by Ediciones FEMA. 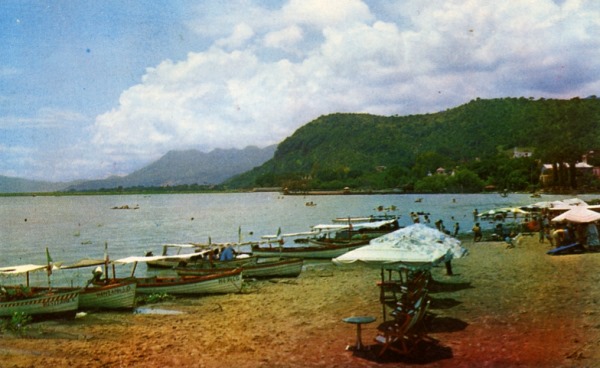 Postcard of Lake Chapala sent by Bigelow’s wife in 1967

Bigelow’s wife, Hermine, wrote on the card that, “This has been such a busy winter in Mexico. Two big one man shows for Seymour, Mexico City and Guadalajara and another in May (22-29) perhaps at the Univ. of Conn[ecticut].” She apologized that they would be unable to visit Cheyenne in the near future and hoped that Hallowell could meet them in Europe the following winter.

Bigelow was born on 11 October 1900 in Swarthmore, Pennsylvania into a well-to-do New England family. His father, Seymour Bigelow, had close links to Mexico that dated back to well before the Revolution (1910-1920). He had toured Mexico in 1901 following a mining conference. When giving a lecture in the Mansfield Men’s Club in Connecticut in 1921, he was described as having had “unusual opportunities of acquaintance with the president of the republic and other high officials.”

Lucius Seymour Bigelow Jr. studied art on a scholarship at Albright Art Gallery School in Buffalo, New York, and then began classes at the Philadelphia Academy of Fine Arts in 1919 where he studied under Fred Wagner (an early impressionist) and Henry McCarter. He continued to study there there at least until July 1920. That year Bigelow showed “half a dozen pictures of the modern type” at the annual thumb-box exhibition of the Buffalo Society of Artists at Albright Art Gallery.

Bigelow also studied at the Art Students League in New York (1921-22) under the direction of John French Sloan, American painter Robert Henri and Canadian-American artist Boardman Robinson and at the Yale School of Fine Arts.

The family traveled in Europe in the early 1930s. According to press interviews Bigelow gave later, this was when he decided to focus exclusively on watercolor painting. The Bigelows returned from Europe in August 1934, returning to New York on 9 August from Trieste, Italy.

When Bigelow lectured about modern art to the Pencraft literary society of the University of Connecticut in March 1935, he illustrated the lecture with examples of his own watercolors, arguing that “the best art must necessarily be impressionistic.” The lecture was accompanied by an exhibition of his watercolors. This exhibition was one of several solo exhibitions he held in the years following his trip to Europe and this particular collection had previously been shown in Baltimore, where a reviewer praised his work: “Mr Bigelow is a master of color, his work possesses a quality rarely encountered in watercolors.”

In July 1937, he took part in a group show at the Central Connecticut Art Gallery. By this time the Bigelows were dividing their time between their main home in Mansfield Center, Connecticut, and a summer residence in Sebasco Estates, Maine. (I am still hoping to find more details of his show at the Maine Art Gallery.)

Unfortunately, art alone could not support his family, so Bigelow earned his living working as a draftsman, doing technical plans and drawings, and later in engineering.

In 1942, when he was drafted into the U.S. armed forces, Bigelow – 5′ 11″ tall with blue eyes and brown hair – gave his last residence as Conneaut Lake in Pennsylvania, and said he worked for Frazier Bruce Co.

Seymour Bigelow continued to paint and hold solo shows during the 1950s. It is unclear when he first traveled to Mexico to paint. However, his one-person show of watercolors at Community House, Storrs, Connecticut, in 1952 included “scenes from Mexico, New Mexico, Maine and a few from Europe.” The following year he held a solo show of watercolors at the Present Day Club, Princeton, New Jersey, and he had another show at the University of Connecticut in 1958.

Bigelow wrote to the New York Times on 30 August 1959 to say he was in full agreement with the paper’s art editor’s suggestion that galleries and museums be encouraged to sell off old paintings that had been donated to them years before in order to make space for newer works. 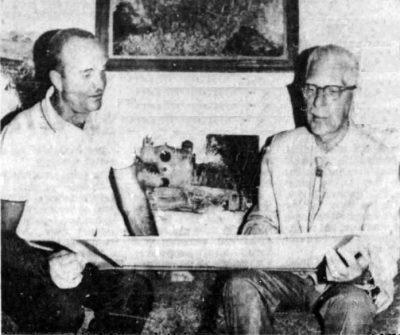 Shortly after Bigelow retired to dedicate himself full-time to his painting, he and his wife spent most of three years (1964-67) roaming around Mexico. At the end of 1966 or early 1967, Bigelow held a solo show of his watercolor paintings at the Instituto Mexicano-Norteamericano in Mexico City. Shortly afterwards, he and his wife stayed for several weeks at the Hotel Chapala Haciendas. While more details of his time in Mexico have proved elusive, it was in March 1967 that his one person show opened at the Casa de la Cultura in Guadalajara, an exhibition that featured more than 30 watercolors of Mexican scenes, including paintings of Chapala, Ajijic, Guadalajara, Manzanillo, Cuautla, Cuyutlan and Oaxtepec.

In 1968, Bigelow was back in the U.S. and held a showing of some of his work in Baltimore, followed by a joint show with Jay Stokes at the home of Mr and Mrs Robert Plimpton in Palau Beach Ile, Singer Island, Florida.

Examples of Bigelow’s work can be seen in the collections of the Patten Free Library, Bath, Maine; the Instituto Cultural Hispano-Mexicano in Mexico City; and La Casa de la Cultura Jaliciense in Guadalajara.

10 Responses to “Does anyone have a painting by Lucius Seymour Bigelow, who painted Lake Chapala in the 1960s?”