The only reviews in the U.S. of El Gran Chapa were by Winston Allin Reynolds, a professor in the Department of Spanish and Portuguese at the University of California at Santa Barbara, who subsequently wrote the introduction to the author’s second novel, Llaga viva.

In his short review of El gran Chapa for Books Abroad, Reynolds wrote that the 290-page “prize-winning novel departs from the traditional pattern in many respects.” The emphasis lay “on deep psychological probing into the emotional drives of the Mexican.” Reynolds argued that it was well constructed artistically and imprisoned “the reader in the characters’ awful little world of violence and ‘love-hatred.'” 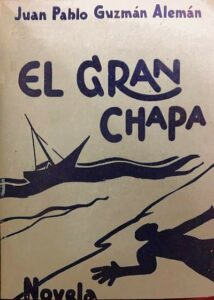 In a lengthier and more analytical review in Spanish for Revista Iberoamericana, Reynolds explained that the book was a significant work of provincial fiction because its “talented author” had resisted the allure of moving to the capital city, preferring “the quiet and anonymous life of his native region,” where he could live and work “away from ambition.”

As Reynolds pointed out, provincial fiction is too-often regarded as somehow inherently inferior to the works produced in a country’s capital city. Capital cities were thought to offer a “propitious and stimulating environment for artistic creation” and far more “pecuniary and professional opportunities”.

However, Reynolds argued that El gran Chapa was not a traditional regionalist novel, where the emphasis was on a solid plot and realistic depiction of life, but was more modernist. The book was an artistic creation whose “pages that vibrate with emotive power” sought to capture the “spiritual and sensitive depth” of the Mexican.

Reynolds summarized the plot:
– “A young Indian seminarist returns to his people in the Chapala Lake region, which groans under the most brutal caciquismo. This deep-rooted social disease is the heritage of the despotic pre-Cortesian chieftain Chapa, ruler of the ancient kingdom called Chapalac. The seminarist is gradually and painfully drawn back into the environment, and after a series of emotional crises his mystical character finds an outlet in a wild dream of liberating his race from themselves and uniting them in a movement of great brotherly love. The drama is climaxed by his inevitable destruction at the hands of his own people, still incapable of throwing off their inherent barbarism.”

The book opens with about a dozen people on horseback, including the seminarian, riding down from the hills towards Chapala:

“Now the views rolled down the slopes until they bounced off the bottom of the ravines divided into geometric cultivated plots. The beasts trampled their hooves in the stony path that widened with premeditated plan to allow for the wheels of carts and cars. This road was a novelty that contrasted with the old anonymous tracks that the muleteers had made and it was like the door that Chapala opened to the world so that tourists and merchants began to plague its beach, its streets, its indigenous heart. A rough route, but many automobiles (small Fords) had already begun a flow of traffic that covered the distance at incredible speeds (from twenty to thirty kilometers an hour) to bring the bourgeois and foreigners who misused the near-virginity of the region.” [9-10]

This adept paragraph not only provides a setting for the action but sets up one of the central conflicts of the novel, the differences between old ways and new. It more than hints at class differences, environmental changes and the adverse impacts of tourism.

In terms of plot, the seminarian eventually “begins to fall under the mysterious influence of the great gods that inhabit the lake” and decides that the only way forward from his “tremendous spiritual chaos” is to concoct a plan to free his people. In Reynolds’ words, “[He] believes himself called by divine inspiration to unite the fishermen in a great movement of brotherly love. He will be their redeemer and will save them, despite their own resistance.” Unfortunately, his plan has an air of doomed inevitability about it. When it fails, “the seminarian, raptured by violent psychological currents in a state of perpetual crisis, ends up being cruelly destroyed by his own people.”

Reynolds felt that the novel “affords a valuable insight into the Mexican’s enigmatic reaction to life, subjectively interpreted by the author’s own intensity of feeling and artistic skill” and that El gran Chapa was “a novel that although it is unlikely to acquire great renown, will remain as an interesting effort, of great literary quality. Its pages are a magnificent example of what an author from the provinces can achieve.”

I would go significantly further than Reynolds in applauding the genius of this book, which is remarkable for its psychological insights into the mixed feelings of Lake Chapala’s indigenous residents as they responded to the massive influx of outsiders, tourists and foreigners during the 20th century.

It is both ironic and tragic that this beautifully-crafted novel, El gran Chapa, with its perceptive examination of how the area’s indigenous people perceived outsiders and foreigners, is no longer in print and no longer readily available.