Edna Mae Stark, who was a travel author and publicity agent in Mexico and elsewhere for Grace Line, described Lake Chapala in the 1930s.

Little is known about Edna Mae Stark beyond the fact that she was born in Chicago. Her date of birth is given as 10 May 1905 on some ship manifests and as the same day in 1908 on others. She worked for Grace Line from the 1930s to the late 1950s, including stints on the Santa Lucia, Santa Paula and Santa Elena, three of the four passenger and cargo ocean liners ordered by Grace Line in 1930 from the U.S. Federal Shipbuilding and Drydock Company of Kearny, N.J. In 1957 Stark was listed as “Grace Line Cruise Director”.

Stark wrote dozens of articles for popular magazines about Mexico, the Caribbean, Central and South America and about the joys of cruise ship travel. In her article “Discovering Mexico”, published in Modern Mexico in July 1937, she lauded Lake Chapala eighty years ago as:

the largest lake in Mexico – 70 miles long and 20 miles wide – a gem of sapphire blue, set in a crescent of emerald green formed by surrounding hills. The climate here all year round is that of Indian summer – the surrounding fields are continuously carpeted with flowers which drench the air with perfume, and woodlands are crowded with sweetly singing birds of every hue attracted to the lake in countless thousands by the warm temperature.”

The article included an image of a “Water Boy” credited to “Grace Line Photo.” The photographer responsible for this image, a colorized postcard version of which was later published by Publicaciones Fischgrund of Mexico City, was Luis Márquez. 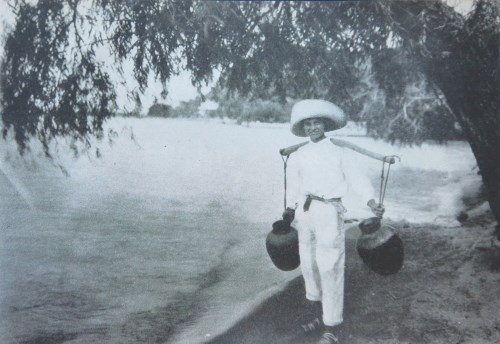 Stark was particularly captivated by the daily rhythm of fishing:

The lake is teeming with fish which provide the natives with food for their tables and visiting sportsmen with ample material for tall tales to recount to friends back home. The natives catch the fish in nets which they weave themselves – many of them more than three hundred feet long. These native fishermen, as they follow the day’s routine, present a series of novel sights to the visitor.

Early morning unfolds a shadow picture of men hastening to the waterfront, scrambling into their battered boats and setting out for the catch. Mid-day lights up a scene in which mounds of fish appear along the shore glinting in the sun like piles of gleaming armour, and village streets are walled with nets stretched on poles like giant cobwebs hung with dew drops. And day fades out on interesting close-ups of the villagers repairing old nets, or making new, their hands flying like shuttles over the shapeless mass of cords.”

It is unclear if Stark ever visited the town of Chapala. She considered that:

The most modern town on the shores of Lake Chapala is Ribera Castellanos, which is destined for popularity as a vacation resort. With a good hotel as headquarters, guests may fish, or hunt, swim or ride horseback, go motoring or sailing.”

Among the aspects of everyday life that she described for would-be visitors was the fact that:

Women still weave and dye the fabrics from which they make the family wardrobe – using designs and color combinations handed down from mother to daughter for countless generations. In open air kitchens the housewife rolls out cornmeal tortillas on the same type of stone metate which the Aztec women used. And corn still is as popular an item of diet as it was back in prehistoric days when the planting and harvesting were attended by elaborate and very weird celebrations through which the Indians hoped to win the goodwill of the maize goddess.”