Marie Robinson Wright (1853-1914) was the author of two non-fiction books about Mexico, the first published in 1897 and the second in 1911. The later book includes a short description of Lake Chapala and an early photo of the shoreline villas as seen from the lake.

Born in Newnan, Georgia, on 4 May 1853 to a wealthy plantation owner and his wife, Wright grew up in privileged surroundings. She was disinherited after running away from home at age 16 to marry Hinton P. Wright, the son of a prominent lawyer.

Both her family and her husband lost everything in the Civil War and in 1886, now in her early thirties, she divorced her husband and, in order to support her two children, turned her hand to journalism and travel writing. She became a correspondent for the New York World and wrote a series of well-illustrated and keenly observed articles and books on Mexico, Central America, and South America.

In 1891, she visited Mexico and in 1892 she penned an eight-page article about the country for the New York World, supplemented by illustrations. The newspaper was paid 20,000 dollar in gold by the Mexican government for this supplement, a record price for a newspaper article at the time.

The following year, Wright was commissioned to write an illustrated booklet about the 1893 World’s Columbian Exposition in Chicago. Shortly afterwards, Wright decided she could do better on her own.

Accompanied by her daughter, Ida Dent Wright, she returned to Mexico in 1895 and received official approval for a book about the country. President Porfirio Díaz and Foreign Secretary Ignacio Mariscal gave her letters of introduction to every governor in the country and arranged for her to have access to steamboats and private trains, with military escort if required, wherever she wished to travel.

The two women spent the next year traveling throughout the country, covering thousands of miles by mule, railroad and steamboat. Few women tourists had ever visited some of the remote areas that Wright and her daughter explored. (One notable exception was Englishwoman Adela Breton, who, in 1893, began her own odyssey exploring unlikely parts of Mexico on horseback, accompanied only by a local guide.) 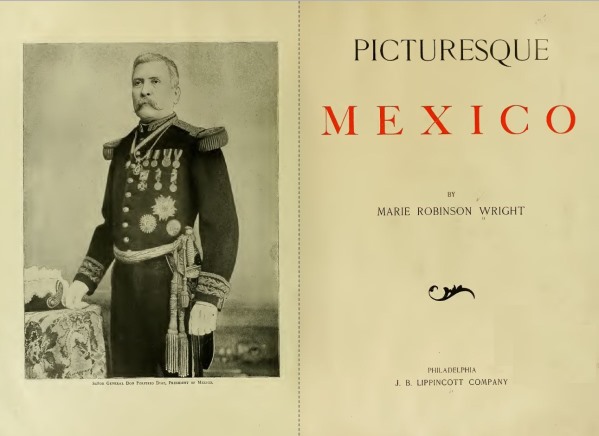 The result of Wright’s travels was her first book on Mexico – Picturesque Mexico – published in 1897. It was “the most comprehensive and beautiful book on Mexico ever written in any language” and 8,000 copies were ordered by the Mexican government in advance for distribution to government officials and representatives at home and abroad. It included only this brief description of Lake Chapala:

Among the lakes which stud with beauty this prosperous state [Jalisco] is Lake Chapala, larger than Lake Geneva, and the largest and most beautiful in the republic. This lake, by reason of its area of eight hundred and ten square miles, is sometimes known by the name of the Chapalan Sea. Lake Chapala is a summer resort of the highest grade, and is frequented by the most prominent residents of Guadalajara and other large towns. There has recently been discovered a large deposit of petroleum discharging from the bottom of the lake.”

Wright was invited back to Mexico in 1910 and her second book, produced in 1911, commemorated Mexico’s centennial. This book, entitled Mexico – A history of its progress and development in one hundred years, includes, on page 418, this photograph of the shoreline villas at Lake Chapala.

During this trip, Wright learned about the Hotel Ribera Castellanos, on the lakeshore near Ocotlán. The hotel had opened a few years earlier, in 1906, and Wright clearly appreciated its delights:

Chapala, where they are some famous hot springs and a fine new hotel of modern equipment called the Ribera Castellanos. This resort is very convenient to Guadalajara. No more charming excursion for a lover of beautiful scenery can be found in all Mexico that around this beautiful lake. For water-fowl shooting during the fall and winter months and for sailing and bathing during the entire year, these shores are delightful. Most all the members of Mexican society find themselves there during Holy Week and other holidays. The President goes on his yearly hunting trip to these parts, accompanied by his son and some members of his cabinet and intimates. He is noted for his powers of endurance, often outstripping the others in his ardent quest for game.”

While this description is not entirely accurate (President Díaz did not actually hunt at Lake Chapala every year) the essence of her account was spot-on.

Wright was an elected member of several learned societies and served as a special delegate to international expositions. She made her home in New York City and died there on 1 February 1914.