When enthusiastic British traveler William English Carson visited Chapala in 1908–1909, he liked what he found. His book about Mexico—Mexico, the Wonderland of the South—was based on four months’ residence in the country and published just before the start of the Mexican Revolution,

Carson arrived in Guadalajara in November 1908 and stayed over the New Year before staying at the Hotel Arzapalo in the village of Chapala for a few days. His description of a noxious weed infestation at Lake Chapala is one of the earliest detailed descriptions of its kind:

“All along the shores of the lake, and in the Lerma River which runs into it, hundreds of peons are employed in gathering and burning yellow water-lily which has invaded the waters. A few years ago, some imbecile planted a quantity of the lily in the river, thinking it would look pretty. In an incredibly short time it spread like wildfire; some of the streams were completely choked with it, and when I visited Chapala the river was covered in places with green masses of the plant. It had spread all along the lake when the Mexican government took the matter in hand and appropriated a large sum of money for its destruction. At night, fires can be seen blazing along the shores of the lake where the peons have collected and are burning large piles of the noxious weed.”

Either Carson’s sense of color was flawed or his description of the “yellow water-lily” was not intended to refer to the violet-flowered water hyacinth described at about the same time in Terry’s Mexico Handbook. More than a century later, the water hyacinth is still periodically a problem. 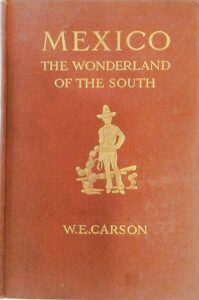 Commenting that “very few Americans have ever heard of Lake Chapala”, Carson described how “a number of pretty villas are dotted along the lake’s edge, embowered in bougainvillea and hibiscus, palms and orange trees. ” The popularity of the village had led to some land speculation:

“On a hill a short distance from the shore some land has been divided into building lots for villas, with the idea of starting a model American summer village; but the price of the ground is so high—about $1000 per lot—that very few purchasers had been found.”

After an eloquent description of the tourist life at Chapala, and the lake’s potential for fishing and hunting, Carson wrote that,

“A short distance along the shore, within sight of the beautiful electric-lighted villas, there is another of those queer contrasts so often met with in Mexico. Here is a little village of Indian fishermen who live in huts or wigwams of rushes and adobe, some of the fishing houses being built on piles in the lake like those of the prehistoric lake-dwellers in Switzerland…. To visit this place when the sun is setting, and see the weird figures flitting about beneath the semitropical foliage, conversing in low tones in their ancient dialect, living the most primitive of lives, makes it almost impossible to realize that hardly a mile away are comfortable hotels, a railway, Pullman cars and other adjuncts of latter-day civilization.”

Elsewhere in the book, many of his views about Mexicans will strike modern readers as stereotypical. For example, in an otherwise fascinating chapter about “The Mexican Woman”, he makes several outrageous over-generalizations, including:

—  “As a rule, the Mexican women are not beautiful”

—  “no foreigner, unless he be associated with diplomacy, is likely to have any chance of studying and judging the Mexican women

— “the Mexican girl has but two things in life to occupy her, love and religion”

According to Carson, “fevers and malaria are certain to result from exposure to the rains or the intense heat of the midday sun.” He attributed the progress (as evidenced by the bustling city and high costs of living) in Mexico City and elsewhere to American influence. Carson thought that “Americanization” was such a positive impact that Mexico might one day become “peacefully annexed to the United States.” (!)

Very little is known about his early life, but journalist and author William English Carson (1870-1940), apparently toured the Outer Hebrides in 1897 in the company of future tabloid pioneer Alfred Harmsworth (later Lord Northcliffe). Carson later made his home in New York and became a naturalized American citizen. He also wrote The marriage revolt; a study of marriage and divorce (Hearst’s International Library Co., 1915) and Northcliffe, Britain’s Man of Power (Dodge Publishing Co., 1918).

[This is a lightly edited excerpt from chapter 52 of my Lake Chapala through the ages: an anthology of travelers’ tales.]