Thomas Philip Terry (1864-1945) was born in Georgetown, Kentucky. Terry first visited Mexico in his early twenties and spent 5 years working for The Mexican Financier, a Mexico City weekly, while writing a series of short stories and news reports for U.S. newspapers and completing a popular Spanish-English phrase book. Terry then lived briefly in New York before moving to Japan for a decade.

He had a flair for languages and this inveterate traveler and reporter witnessed first-hand the China-Japanese War, the Boxer outbreak, the Russo-Japanese war, and the Spanish-American war in the Philippines. He returned to Mexico, with his wife and their two young sons, in 1905 as manager (administrator) of the Sonora News Company, a position he held until 1910.

The Sonora News Company was a prominent publishing house, founded in Nogales, Arizona, in about 1884 by W. F. Layer. Layer established the company in order to control the news business along the Sonora railroad which ran from Guaymas to Nogales. In 1888, not long after the company opened a Mexico City office, it won the contract for supplying periodicals and other items on the Mexican National Railway (linking Mexico City to Nuevo Laredo), and for running news agents on its trains. As more and more railroad lines were built, the company continued to expand; by 1891 it had contracts with the Sonora, Central, International, National, Monterrey, and Mexican Gulf railroads.

In addition to its regular news gathering and disseminating activities, the Sonora News Company published two seminal guide books about Mexico. The first was Campbell’s new revised complete guide and descriptive book of Mexico, by Reau Campbell, published in 1899, and the second was Terry’s Mexico handbook for travellers, first published in 1909. This encyclopedic guide, thoroughly good reading, covers lots of ground that was, and still is, hard to find elsewhere. 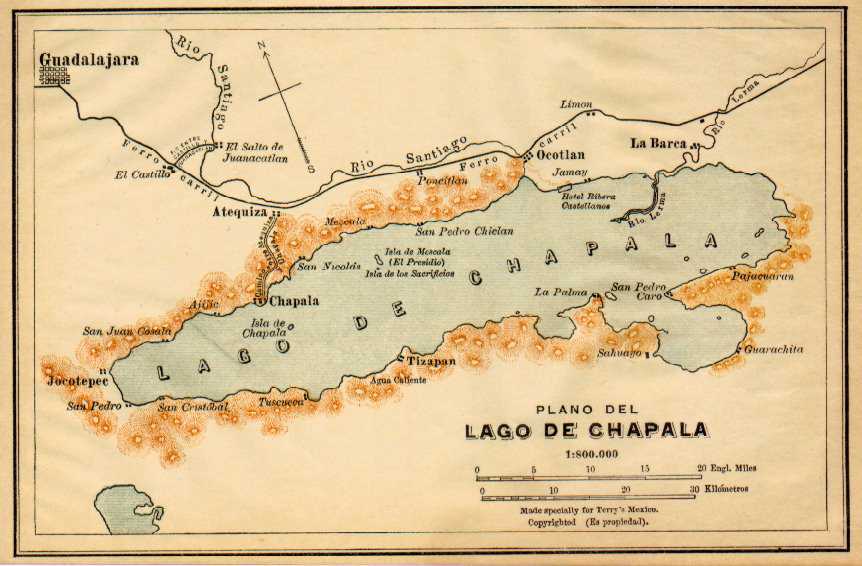 This map in Terry’s handbook, which helped persuade D. H. Lawrence to visit Chapala, shows the lake larger than it really was in 1909—the eastern swamps had been drained and reclaimed as farmland by that time.

Terry’s Mexico handbook was so well-received by President Díaz and his cabinet members that they ordered copies to be sent to every Mexican embassy, legation and trade office across the world. The guide quickly became the travel bible for Thomas Cook and Sons and other travel agencies and tourist organizations, and remained the tourist “bible” for decades.

Its description of Chapala is credited with convincing the English novelist D. H. Lawrence that he simply had to see the town and its eponymous lake for himself. During his residence at Lake Chapala, Lawrence wrote the first draft of The Plumed Serpent, using local settings and characters for inspiration.

Terry’s research was meticulous and his informative guide delves into the details of everything from history to hotels, and from shopping to excursions. It was expanded in numerous subsequent editions as Terry’s Guide to Mexico, with later editions revised by James Norman.

In 1914, Terry produced a second book on Mexico: Mexico: an outline sketch of the country, its people and their history from the earliest times to the present.

In a curious twist of fate, Terry also has a much more recent connection to Lake Chapala in that Robert C. Terry (his grandson) retired with his wife, Judith, to Ajijic in 2007.

For more about Terry and his description of Lake Chapala, see chapter 53 of my Lake Chapala Through the Ages, an anthology of travelers’ tales.