At first glance this may not seem to be the most exciting photograph of Lake Chapala ever used for a postcard. However, “Casa Abitia” – the card’s publisher – was the business name for one of Mexico’s most interesting, pioneering and remarkable photographers. 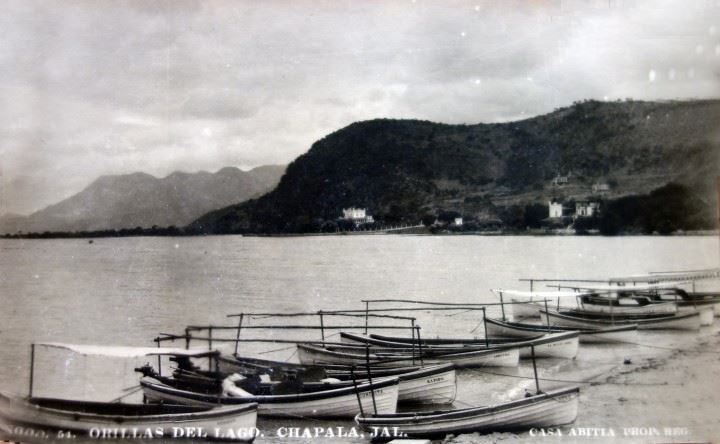 Jesús Hermenegildo Abitia Garcés, commonly known simply as Chucho Abitia, was born in Batuchic, Chihuahua, on 13 April 1881, spent his early years in Sonora, and died in Mexico City in 1960.

He took his first photographs at the age of 12, after spending his savings – all US$2.50 of them – on an American camera. In 1905, in his twenties, he set up a photography business in Hermosillo, Sonora, named Abitia Hermanos Fotógrafos, that specialized in the distribution of Eastman Kodak products and materials. He was also a pioneer of moving pictures in Mexico, shooting such reels as El mata mujeres (“He kills women”), Los amores de Novelty (“The loves of Novelty”), Los dos reclutas (“The two recruits”) and El robo del perico (“Theft of the parakeet”), all released in 1913.

During the Mexican Revolution, Abitia joined the Ejército del Noroeste (Constitutional Army of the Northwest) commanded by his former school friend, Álvaro Obregón. As a propaganda officer, Abitia recorded the advance of Obregón’s constitutionalist troops as they took control of Culiacán, Mazatlán and Guadalajara before entering Mexico City in August 1914. Obregón was joined in Mexico City a few days later by Venustiano Carranza who established a new government.

In about 1914, and in cooperation with other family members, he established a photographic business – Abitia Hermanos Fotógrafos – in Guadalajara. He was commissioned by then president, Venustiano Carranza, to travel throughout Mexico, shooting documentaries to be shown across Latin America as a means of promoting the country’s progress.

Abitia’s family photography business in Guadalajara continued to operate until 1926. The family store, operating initially as “Abitia Hnos y Cia” and later as “La Casa del Fotógrafo”, was located at Avenida 16 de Septiembre #160. It advertised its products – all sizes and formats of Kodak film “direct from the factory” – and services sporadically over the next few years, occasionally offering discounts such as “10% off all films, plates, papers and postcards”.

This mention of postcards strongly suggests that the Abitia view of Chapala, illustrating this post, dates from about this time. In 1921, a display advert in El Informador boasted that Casa Abitia offered “Tarjetas Postales de Guadalajara y Chapala. Hermosa colección, única en la ciudad.” (“Postcards of Guadalajara and Chapala. Beautiful collection. Unique in the city.”)

Abitia also continued to make movies and, in 1922, with a budget of $300,000 pesos, he founded the Estudios Chapultepec in Mexico City. The earliest Mexican movie with sound was Santa, filmed here in 1931.

At some point, Abitia acquired the Hacienda San Gaspar in Jiutepec, just outside the city of Cuernavaca in the state of Morelos. In the late 1940s, he built a trout farm on part of the property.

In addition to his career as a photographer, Abitia was an accomplished violinist and built several innovative stringed instruments. He first made string instruments in about 1900. His instruments were of high acoustic quality and craftsmanship and included a viola, a violeta (between a viola and a violin) and a violetín (a fifth sharper than a violin) as well as an ultrabajo (five tones below a doublebass). He collaborated with the notable Mexican musical inventor, Julián Carillo in the development and perfection of Sonido 13. (For more about this unusual musical system, see chapter 25 of my Mexican Kaleidoscope.)

For a sample of Abitia’s documentary work, this short silent documentary – “Los combates de Celaya (Abril 1915)” – is viewable on Youtube. Abitia filmed this in April 1915 as General Alvaro Obregón and his forces took the city of Celaya, Guanajuato. (The music accompanying the film on Youtube is by the Hermanos Záizar.)