Multilingual playwright Samuel McCulloch (1921-1991) and his wife, Jennie, lived in an old adobe house in Ajijic for six years from 1956 to 1962. In a 1958 press interview, McCulloch told a reporter that in Ajijic he was writing plays, working daily from 11 am to 7 pm, with a break for lunch, and that “When we first went there two years ago, we had electricity only at night. Now we’ve got it round the clock, except when the plant is broken down, which is every few days.” McCulloch named the plant operator as “Pancho de la Luz” and added that there were “about 75 Americans in Ajijic, many of them retired business and professional men and their wives.” 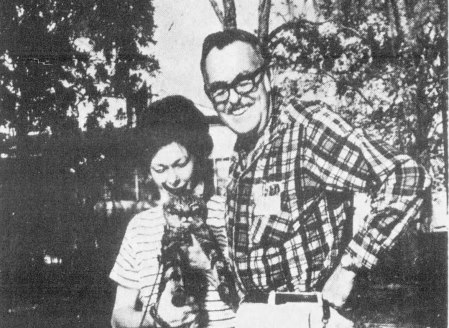 Born on 9 February 1921 in Memphis, Tennessee, McCulloch was educated at Central High School, Memphis, and Choate School in Connecticut. (Coincidentally, a former teacher at the Choate School—novelist Christopher Veiel—had lived in Ajijic a few years earlier.) McCulloch then studied at Haverford College in Pennsylvania, before graduating with a degree in English and Greek from Southwestern (now Rhodes College) in his hometown.

During the second world war, McCulloch served with the US Army as an interpreter and interrogator of prisoners of war in Africa, Italy and France, work which improved his command of German, Italian, French and Spanish.

After the war ended, McCulloch took classes at the Sorbonne in Paris and at the University of Perugia, Italy, before completing an MA in drama at Syracuse. In 1947 he registered the copyright of a film script, apparently never published, titled “The Turning Point.”

In 1952 he returned to Memphis and helped found the Arena Theatre in Memphis, Tennessee; McCulloch also operated a summer theater in Myrtle Beach, South Carolina. The Arena lasted only a couple of years, but attracted stars such as John Carradine and Eva Gabor to perform in its plays. The theatre ran into censorship problems in 1953 when McCulloch adapted Erskine Caldwell’s novel Tragic Ground, which features a young man and woman in bed, but clothed. The performances were duly moved to a nightclub in West Memphis.

It was at the Arena that McCuloch met his wife, Jennie Keeter, who had majored in English at Queens College in Charlotte, North Carolina, and took a part-time gig as a volunteer usher. Not long after the Arena folded, the couple couple moved to Ajijic. In his 1958 interview, McCulloch claimed to have been writing most of the time; in a later interview he claimed that in Ajijic the couple “did absolutely nothing for six years.”

What did McCulloch and his wife think of Ajijic. When they returned briefly to Memphis in 1959, Sam told a local newspaper that He had just put a manuscript in the mail, that “Harper’s is bringing out a novel soon by one of our people” and that “The Golden Fleecing,” written by another Ajijican, Lorenzo Semple Jr, had recently received good notices on Broadway. (Note that it is unclear which Harper’s novel was being referred to; Willard Marsh’s Week With No Friday, set in Ajijic, was not released by Harper’s until 1965.)

However, even if McCulloch was optimistic about his writing career, he reported that Ajijic was “now crawling with Americans so Jennie and I are sneaking around at night, putting up “Yankee Go Home” signs.” Goodness only knows what McCulloch might say if he were able to visit Ajijic today!

After their extended vacation in Mexico, McCulloch joined the US Information Service and the couple spent three years in Paraguay, followed by stints in Chile, Guatemala and Washington DC, where McCulloch was cultural coordinator for Latin America.

Sam and Jenny McCulloch retired to Jonesville, Lousiana, in 1972, shortly after buying a home, sight unseen, on Horseshoe Lake. Mementos from their time in Mexico and their travels were proudly displayed in their lakeside home.

McCulloch died in Baton Rouge, Louisiana, on 17 March 1991, shortly after his 70th birthday.

To read more about life in Ajijic in the 1950s, and the many authors who lived there, see the 13 chapters that comprise Part C of Foreign Footprints in Ajijic: Decades of Change in a Mexican Village.

One of the modern myths of Lakeside is that long term American resident and benefactor Neill James, author of Dust on my Heart, was the originator of the phrase “When once the dust of Mexico has settled upon your heart, you cannot then find peace in any other land.”

Dust on my Heart, published in 1946, was James’ final book, the only published work she wrote in Ajijic, and the only one of her books to include descriptions of life in the village. However, you only have to read the first page of the book to realize that James never claimed any credit for the “dust of Mexico” quote; she fully acknowledged that it was an existing saying and not an original line. What James actually wrote on the first page of Dust on my Heart was:

There is a saying, ‘When once the dust of Mexico has settled upon your heart, you cannot then find peace in any other land.’”

In several modern accounts, this has been modified to:

Neill James wrote, “Once the dust of Mexico settles on your heart, you can never go home again.”” 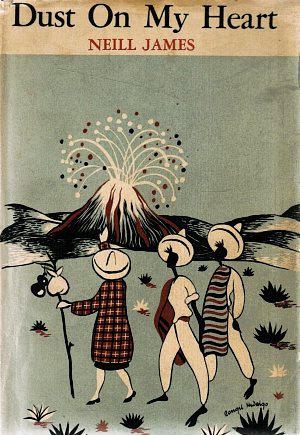 In the years since James, several other authors utilized versions of the same saying. The most famous of these authors is Malcolm Lowry, who writes in Under the Volcano, that “He upon whose heart the dust of Mexico has lain, will find no peace in any other land.”

In recent years, Carolena Torres chose Dust on Their Hearts as the title of her debut novel, which is partially set at Lake Chapala. She paraphrases the original proverb as, “When the dust of Mexico falls upon your heart, you will never be the same.”

How or where did Neill James first encounter the proverb? Immediately prior to her arrival in Ajijic in 1943, James had spent several months in and out of a Mexico City hospital following a climbing accident and a volcanic eruption. It is entirely possible that it was in the hospital or shortly afterwards, during her convalescence  in the spa town of Ixtapan de la Sal, that she read Dust of Mexico , a romance novel by Ruth Comfort Mitchell. Embedded in the story line of this novel, first published in 1941, is this version of the saying: “Once the dust of Mexico has settled on your heart, never can you rest in any other land.”

On first hearing it, the central character in Dust of Mexico—Priscilla Carpenter, a staid, single New York librarian—laughs at the idea. However, she changes her opinion after being taken on a trip to Mexico by a married, frivolous aunt, who promises Priscilla’s mother that there will be no men on the study tour of the National Federation of Business and Professional Women. But there are men, including a famous radio comedian and an ambitious American doctor, and in the process of choosing between several men, Priscilla “gains a knowledge of the romance and lure of Mexico.” Prior to publication as a novel, Dust of Mexico had been serialized in Women’s Home Companion.

Or perhaps James had read Anita Brenner? A decade earlier, renowned Mexican author and art critic Anita Brenner (1905-1974) quoted an almost identical version of the same proverb on the very first page of her Your Mexican Holiday: A Modern Guide, published in 1932: “Once the dust of Mexico has settled on your heart, you have no rest in any other land.”

And, going back ten years before that, in 1923, reporter, artist and screenwriter Wallace Smith used yet another extremely similar version in The little tigress; tales out of the dust of Mexico, a collection of stories set during the Revolution. The chapter titled “Dust of Mexico” opens as follows:

“Once the dust of Mexico has settled on your heart there can be no rest for you in any other land. That is a saying in Mexico. It is spoken proudly and sometimes hopelessly. The truth of it is in the empty, seeking eyes of exiles in other countries- in places far away from the land of golden lights and purple shadows.” Smith was a talented cartoonist and “these tales of love, treachery, courage, and adventure are illustrated by the author’s atmospheric drawings from his field sketchbook.”

If you can add other instances of the use of versions of the “Dust on my Heart” saying in mainstream works (particularly in early ones), please get in touch!