Luis Gonzaga Urbina (1864-1934) was born in Mexico City 8 February 1864. In his lifetime, he was one of Mexico’s best-known poets, straddling the boundary between romanticism and modernism.

Urbina studied at the National Preparatory School and worked, for a time, as the personal secretary of the Education Secretary Justo Sierra. Urbina taught literature and was a reviewer of theater and music for publications such as El Mundo Ilustrado, La Revista de Revistas and El Imparcial.

In 1909 he was chosen to lead the compilation of a literary anthology, Antología del Centenario, to commemorate the 1910 centenary of Independence. Urbina’s lengthy introduction provided an insightful overview of the history of Mexican literature. 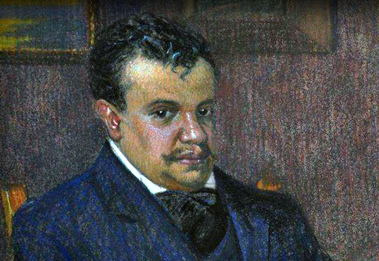 “El poema del lago” (link is to full text in Spanish) consists of 18 sonnets, each with its own particular direction and strength. It combines science and poetry and sometimes draws attention to environmental issues. For example, the opening lines describe the suffering of a single tree, scarred by axes and wildfires:

What is this sombre dark jungle gesture:
ancient tree, withered, a memory of green?
Where your burned out bark and hatchet marks seem
to ghostly, cast shadows on the plain and fester.]

During the early part of the Mexican Revolution (which began in 1910), Urbina was Director of Mexico’s National Library (1913-1915). When revolutionary forces took Mexico City in August 1915, and Álvaro Obregón became president, Urbina left the country for exile in Cuba, where he taught and continued his career as a journalist.

In 1916, El Heraldo de la Habana sent Urbina to Spain to be its Madrid correspondent. At the time, due to the Mexican Revolution, many illustrious Mexicans were living, studying or exiled in Spain; they included Alfonso Reyes, Martín Luis Guzmán, Diego Rivera and Ángel Zárraga.

Urbina spent much of 1917 in Buenos Aires, Argentina, and from 1918-1920, was appointed the First Secretary of the Mexican Embassy in Spain.

A man of many parts, but best remembered for his original, emotive and elegant poetry, Urbina died in Madrid, Spain, on 18 November 1934; his remains were returned to Mexico and interred in the Rotonda de las Personas Ilustres in Mexico City.