The distinguished Canadian poet Earle Alfred Birney (1904–1995) traveled in Mexico in the 1950s and wrote several poems based on his experiences, including one entitled “Ajijíċ”. 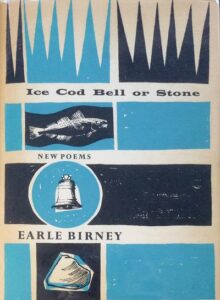 Birney was born in Calgary, Alberta, on Friday 13 May 1904 and raised on a farm near Creston in British Columbia. After short stints working on a farm, in a bank and as a park ranger, he attended university to study chemical engineering.

During the second world war, he was a personnel officer in the Canadian Army, the basis for his 1949 novel Turvey, which won the Leacock medal for humor in 1950. Immediately after the war, Birney took a post at the University of British Columbia, where he was instrumental in founding and directing Canada’s first creative writing program. He retired from that university in 1965 to become the first Writer in Residence at the University of Toronto.

His poetry was widely acclaimed, published in more than hundred journals and regularly featured in anthologies. It also resulted in him becoming a two-time recipient of the Governor General’s Award, Canada’s top literary honor. Birney also wrote plays, novels and non-fiction, as well as working at different times as literary editor of Canadian Forum, editor of Canadian Poetry Magazine and supervisor of European foreign-language broadcasts for CBC.

Birney’s poem “Ajijíċ” [sic] is one of a series of 12 Mexican poems that forms the second section of his Ice Cod Bell or Stone: A Collection of New Poems (1962). The other poems are entitled: “State of Sonora”, “Sinaloa”, “Njarit”, “Late Afternoon in Manzanillo”, “Irapuato”, “Pachucan Miners”, “Six-Sided Square: Actopan”, “Francisco Tresguerras”, “Beldams of Tepoztlán”, “Conducted Ritual: San Juan de Ulúa”, and “Sestina for Tehauntepec”. The place names in the titles clearly shows that Birney traveled quite widely during his time in Mexico, from Sonora and Sinaloa in the north to San Juan de Ulúa in Veracruz and Tehuantepec in the southern state of Oaxaca.

In Ajijíċ, Birney describes a “hip gringo” who, while enjoying a morning tequila, brings out “from under the bar”, “his six feet of representational nonart.”

The poem’s final section includes a description of sundown when,

[Note that the correct Spanish spelling for Lake Chapala’s whitefish is pescado blanco.]

Birney’s Mexican poems were very favorably reviewed by other noted Canadian poets and literary figures. A.J.M. Smith, in his “A Unified Personality – Birney’s Poems”, praised this “brilliant series of Mexican poems. I don’t know where you’ll find anything better in modern North American poetry than the combination of wit and sentiment, pertinent observation and auricular, almost ventriloquistic precision than “Sinaloa”, “Ajijic”, or “Six-Sided Square: Actopan”.”

Mexican literary analysis of Birney’s poetry has been more critical. For instance, Claudia Lucotti, an academic at UNAM (Mexico’s National University),  argues that Earle Birney describes a Mexico of cliches, a simplistic country, one seen only through tourist eyes. She regards Birney’s attempt to record the typical speech patterns of a Mexican speaking English as patronizing and stereotypical. Incidentally, in the same chapter, which examines how various Canadian poets have looked at Mexico, Lucotti considers the same to be true for Al Purdy, another Canadian poet associated with Lake Chapala.

Birney’s fiction works include Turvey: a military picaresque (1949), Down the Long Table (1955) and Big Bird in the Bush: Selected stories and sketches (1978), while his non-fiction writing includes The Creative Writer (1966), The Cow Jumped Over the Moon: The writing and reading of poetry (1972), and Essays on Chaucerian Irony (1985).