The Lake Chapala Auditorium (Auditorio de la Ribera), now celebrating its 40th anniversary, was originally scheduled to be formally opened on 25 September 1976 with a piano concert by Manuel Delaflor from Mexico City, who had just played at New York’s Carnegie Hall. In Ajijic, Delaflor was to play a Baldwin grand piano that had been donated to the auditorium the year before by Hilary Campbell, in memory of her sister Elsa. (However, the concert was cancelled at the last minute due to concerns about acoustics).

Hilary Campbell, together with her two sisters, Elsa and Amy, and brother Alan, settled in Chapala in the early 1950s. They first visited Chapala in 1945 but did not retire to the town until 1951. They initially lived in the “Salazar house”, across the street from the plaza. This building, close to Banamex, later became the Allen W. Lloyd offices.

In 1956, the family moved into their own home in Chapala, designed and built by Amy and Alan, at Calle Niza #10, on the hill near the chapel of Our Lady of Lourdes. The family landscaped the grounds and within a few years, the gardens were considered “a showpiece of the area”.

The Campbells were at home on Calle Niza when Life magazine photographer Leonard McCombe arrived in 1957 to document the American community at Lake Chapala. A photo of the eldest sibling, Elsa Campbell, arranging zinnias in the patio, has a caption explaining that the “ex-piano teacher … helps her brother, two sisters and three servants run an elegant household in a home they designed and built for themselves.”

The Campbells were the children of a mining engineer and his wife, Anne, an excellent pianist. Newly-wed, and about to move to Colorado, Anne ordered a Steinway grand piano to be shipped from Germany to the U.S., and then carried up winding Rocky Mountain roads to Gilpin, where the couple planned to set up home. However, the only home they could afford turned out to be quite small. Daughter Hilary later recalled that her mother had chosen to keep the piano rather than have a dining room table. The piano was subsequently inherited by Elsa, who took the piano, her “shining jewelry and faithful ally” from Colorado to New York, Carmel (California) and finally Chapala. 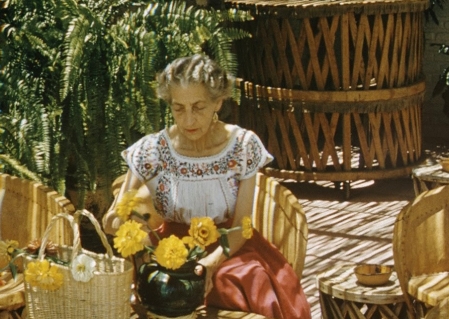 Elsa, who had been born in Ontario, Canada, in 1887 died in a hospital in Guadalajara on 24 May 1971. Her remains were sent to Mexico City for cremation. The only snippet I have managed to locate about Elsa’s early piano playing was from the Boston Evening Transcript for 23 February 1907, when she was about 20 years of age. The newspapers reports that she played a Grieg minuet and Lavalée’s “Butterfly” at the Dorchester Social Club of Women, “pleasing the audience with the delicacy of her nuances and the perfection of her technique.”

Amy Campbell (ca 1889-1966) was born in Denver, Colorado and died in Chapala on 20 February 1966. She lived for several years in Kingston, Ontario, as a child before becoming a faculty member at Simmons College in Boston. When the family was living in New York, Amy became a well-known dress designer. Amy was also a musician and played the violin in several amateur orchestras. Before “retiring” to Chapala, she had lived several years in San Francisco (she is recorded in the 1940 U.S. Census as living in that city with her mother, Anne, then aged 87) and Carmel, California, where she had designed and built houses.

Not content to be retired, Amy went to Taxco and learned silversmithing. She then designed and made silver and gold jewelry, some set with ancient jade found in tombs. Her beautiful jewelry was displayed in galleries in New York and San Francisco. Amy was very active in Chapala social and civic affairs,  including the local Bridge Club and the Lakeside Little Theater.

Hilary Campbell was born in Colorado in about 1891 and lived at least into her mid-80s. At the time of the 1940 U.S. Census, she was living in Manhattan, New York City, where she was an editor in the social work sector. The census record suggests that the four siblings may have had an elder brother or half-brother named James Perkin, born in about 1882.

There is evidence that Hilary was also a poet. In 1956 Witter Bynner, the famous American poet who was a long-time Chapala resident from well before the arrival of the Campbell siblings, gifted Hilary one of his volumes of verse, published the year before, with the inscription “to poet Hilary Campbell”.

It was Hilary (who outlived her siblings) who decided that there was “no better way to honor the memory of her sisters and their part in the early cultural efforts around Lake Chapala than by donating a $10,000 dollars [Baldwin] grand piano to the new auditorium.” The first concert on the Baldwin grand was performed by Mexican pianist Manuel Delaflor on 25 September 1976. 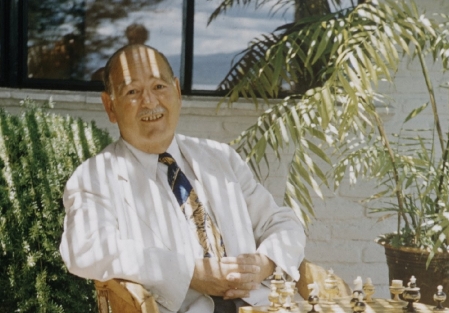 The youngest of the four siblings was Alan Randolph Campbell (ca 1893-1967). Born in Colorado, Alan spent part of his youth in eastern Canada and California, where he was in the class of 1915 at Stanford University. He then worked in Boston and New York, but by 1940 had returned to live in Carmel, California, where he is listed in the U.S. Census as a “salesman in the travel industry”. From Carmel, he moved to Chapala. He traveled widely in Mexico and in Guatemala. He apparently made a documentary film for the Guatemalan government tourism department, though I have yet to find any details. Alan died in Chapala on 8 October 1967; his remains are interred in the municipal cemetery.

Like so many other foreign visitors, this multi-talented family clearly found a new lease of life after “retiring” to Chapala!