Francisco Cabrera was beginning his career as a film writer and producer when he visited Ajijic in about 1944 with fellow producer Alfredo Bolongaro-Crevenna. Their visit was noted by Neill James in her 1945 account of the village. 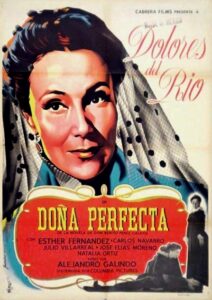 Cabrera, whose birth name was Francisco P. de la Cabrera, had an acting role in the 1932 movie Carceleras, directed by José Buchs, which was the first Spanish film with direct sound recording.

In 1944, at about the time he visited Ajijic, Cabrera wrote and produced Adán, Eva y el diablo, which was directed by Alfredo Bolongaro-Crevenna.

In 1946 Cabrera was one of the founding members of Mexico’s film academy: the Academia Mexicana de Ciencias y Artes Cinematográficas, founded on 3 July of that year. The following year, the academy launched its Ariel awards, Mexico’s equivalent of the Oscars. This was the golden age of Mexican movies, with as many as 85 movies being made each year. The Ariel awards were held annually until 1958 and, after a lapse of 14 years, were re-initiated in 1972.

Cabrera died in Mexico City on 3 July 1965, coincidentally, the 19th anniversary of the founding of the Mexican film academy.

Among Cabrera’s many claims to fame in the history of cinema in Mexicoy is the fact that he introduced the artist Gunther Gerzso to movie-making, when he contracted him to work on Santa (1943). The film was directed by U.S. actor Norman Foster and starred Esther Fernández and Ricardo Montalbán. Gerzso was initially reluctant to try his hand at set designing, but the success of Santa was the start of a lengthy and highly successful career in cinema. Gerzso, who was a good friend of Otto Butterlin (a German-Mexican artist with strong ties to Ajijic),  went on to work in more than 150 movies between 1941 and 1963. Octavio Paz considered Gerzso to be one of Latin America’s greatest ever painters, on account of the fact that he, Carlos Mérida and Rufino Tamayo had opposed the “ideologist aesthetic movement into which muralism had degenerated.”