Artist William (“Bill”) Gentes (1917-2000), who specialized in lithographs and linocuts, lived and worked at Lake Chapala for thirty years.

William George Gentes was born in Brooklyn, New York on 21 June 1917 and died in Chapala on 26 July 2000. Gentes graduated from Hobart College in 1938 and then studied at the Art Students League of New York. He later gained masters degrees from New York State University and from the University of Guanajuato. 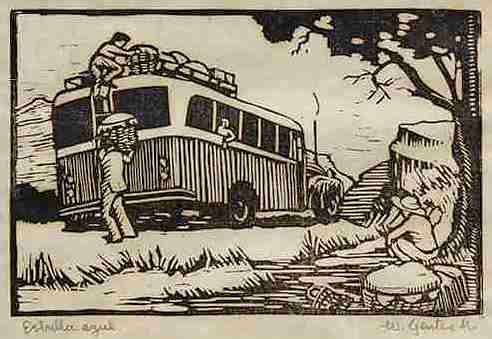 He worked for a time as editor of the Suffolk-Nassau Labor News, and began a lengthy career as a sign painter and an art teacher. With time, he became a sensitive and accomplished printmaker (lithographer) who found in Mexico and its working people the perfect subjects through which to express his exceptionally warm and affectionate outlook.

Gentes first visited Mexico in the summer of 1966 when he drove overland with his wife Adele and their two children (Gaye and Bill Jr.) from New York to Mérida and back. In 1968, the artist took a sabbatical year. The family lived in San Miguel de Allende and Gentes studied at the Instituto San Miguel.

In 1970, at the age of 55, Gentes retired after thirty years teaching in New York and two months after he had been injured while cycling to work. The family moved to Mexico the following year and settled in Colonia Seattle, Guadalajara, where the children went to local schools, while Gentes devoted himself to his art, taking regular trips to unlikely places on the extensive network of local buses to sketch and find inspiration for his drawings, paintings, woodblocks and (later) linoprints. 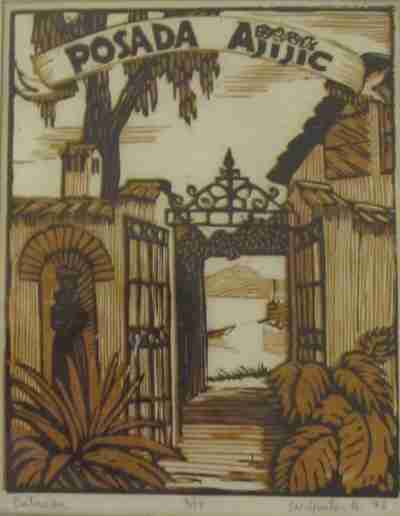 Gentes’ links to Lake Chapala started at this time. From about 1974, the family spent most summers in San Pedro Soyutlán on the south side of the lake.

In 1979, with both children now studying in the U.S., Gentes and his wife sold the family home in Guadalajara and moved to Lake Chapala. They lived near the former railway station in Chapala for about four years, then moved to a house overlooking Ajijic and later to Calle Manglar in Las Redes. With each move, Gentes acquired bigger and better presses, allowing him to make larger print runs without sacrificing quality, and enabling him to employ up to eight colors in his work.

Gentes’ genre art was regularly included in group exhibits in Ajijic. His solo shows included an exhibit in February 1989 at the Art Studio Galeria in San Antonio Tlayacapan. In the 1990s, Gentes was one of the founder members of the group of Ajijic artists who helped launch the Centro Ajijic de Bellas Artes (CABA).

His impish sense of humor is evident in many of his linocuts, but Gentes also had an intensely serious side and used his art to engage with social and political injustices. Some of his strongest works feature characters he had encountered while traveling around western Mexico. It is always worthwhile to look carefully at the wording on a Gentes linocut. The one below translates literally to “The old woman who dances raises lots of dust”, meaning that people who do age-inappropriate things can make themselves look ridiculous. 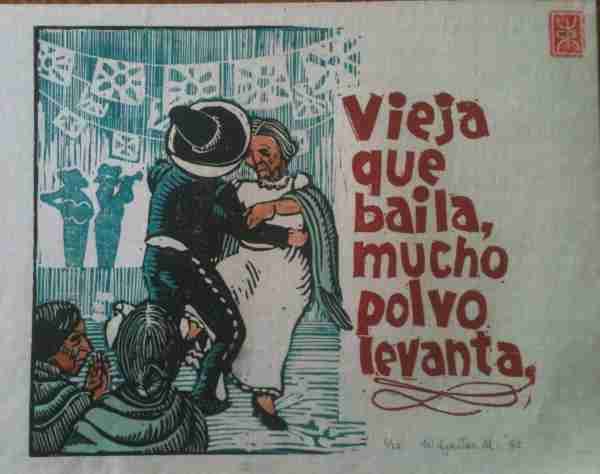 Each of the Gentes family homes in Mexico had a sauna, and it is no coincidence that many of Gentes’ prints depict nudes having a sauna. Having been excused military service during the second world war on account of his poor eyesight, the artist quickly put younger, attractive sauna guests to his home at Lake Chapala at ease by declaring he was so blind he couldn’t see anything. His Mexican-themed parties for fellow artists and art lovers were well-attended and legendary. Generous and fun-loving, Gentes lived life to the full. His son, Bill Jr, recalls that his father was especially delighted when he realized that his years enjoying retirement had exceeded the length of time he had worked in New York.

The 1980s was Gentes’ most prolific period as a printmaker. In 1992, the loss of his wife of 27 years was a severe blow, but Gentes eventually overcame his grief by producing a series of prints depicting his loneliness before restarting his long series of humorous prints. His local solo shows at Lake Chapala included one at the Art Studio Galeria in San Antonio Tlayacapan in March 1989. 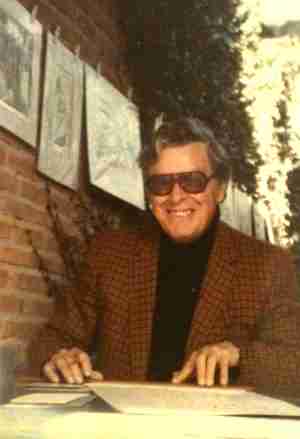 Gentes was especially generous to many fellow artists, not only in terms of encouragement, but also in conducting workshops and allowing them to use his printing presses. When painter Pat Apt first arrived in Ajijic in 1992, Gentes invited her to share his studio at Calle Independencia #5. Apt worked alongside him for six years and the two remained close friends thereafter.

Apt’s abiding impression of Gentes is how he refused to let his deteriorating eyesight prevent him from completing some of his finest work, work that was more colorful than earlier, with bolder, thicker lines. As his sight failed, Gentes relied on his extraordinary spatial memory to painstakingly draw pictures, one square inch at a time, despite being unable to see virtually anything of the piece he was creating.

Gentes’ work is in private collections all over the world. His children inherited more than 700 original artworks and several thousand lithographs. Several linocuts by Gentes were used as illustrations in Don Adams’s book, Head for Mexico: The Renegade Guide (Trafford, 2003).

My sincere thanks to Bill Gentes Jr. for information about his parents’ life in Mexico and his father’s career, and to Pat Apt.