Journalist and author Louis Henry Charbonneau (1924-2017) includes numerous passages about Ajijic in his book The Lair, first published in 1980. Presumably Charbonneau visited Ajijic in the mid-1970s. (If you can supply any details about his time in Ajijic, please get in touch) 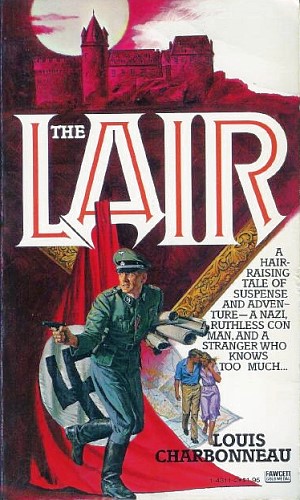 Louis Henry Charbonneau, Jr. was born in Detroit, Michigan, on 20 January 1924 and died in Lomita, California, on 11 May 2017. He completed his B.A. and M.A. at the University of Detroit.

After serving in the US Army Air Force in the second world war, he taught at the University of Detroit for several years before moving to California, where he was a journalist at the Los Angeles Times from 1952 to 1971. He also wrote several radio plays and worked as an editor and copywriter.

Charbonneau’s The Lair, first published in 1980, was republished as an ebook in 2014. This story of a kidnapping and its ramifications begins in Los Angeles in 1972 and includes several brief period descriptions of Chapala, Ajijic and the (Old) Posada Ajijic. Here are a few sample snippets:

“They swept over a high crest and came into view of Lake Chapala, blue in the pale light of evening under an early evening quarter-moon that had just appeared over the mountains as if on cue. The small village of Chapala, now a retirement paradise for retired American admirals and colonels, with American-style golf-and-country-club developments to the east and west, grew away from the lake shore and climbed the foothills.”

“There were supposed to be many Mexicos, Charmian Stewart commented, but this one didn’t seem to belong to Mexicans any more. All they had left was the Chapala pier for Sunday family promenading, and even there the music that sounded in the cafés and clubs for young people to dance to was hard rock, not soft guitar. Their chaperoning abuelas must be bewildered by it all, Charmian mused, anxiously watching their grandchildren turn into something they could not understand.”

“They drove past the Chula Vista Country Club development and the huge Camino Real. The latter, a blaze of lights, was at the edge of Ajijic. The town itself was another of those picturesque Indian villages whose climate and setting on the shore of the lake, with narrow cobbled or dirt streets and tiny adobe houses behind high walls, had led to its being taken over by the horde of norteamericanos looking for a place to live on their pensions without having to scrimp-and with the luxury of a maid and gardener. Most of the houses had been or were being modernized with U.S.-style bathrooms and kitchens.”

“The streets of Ajijic seemed crowded with Americans out for a stroll or Mexicans standing in open doorways. The tiny plaza at the center of the village was busy. There was a movie theater featuring Sean Connery in a James Bond rerun. On the corner opposite was a small, brightly lit and very modern supermercado, its shelves lined with American canned goods, cigarettes and magazines.

– “You’ve been here before?” Blanchard asked, as Charmian Stewart turned along a dark, one-way street leading away from the plaza.

– “I bought this skirt at one of the gift shops here. It’s a pretty little town. You should see it in daylight.”

– “Do any Mexicans still live here?”

– She laughed. “Of course, Who do you suppose the servants are?”

“Charmian parked her compact car along a side street and they walked back to the Posada del Lago . . . . The crooked path brought them to the restaurant on one side and a large cocktail lounge on the right, both almost at the edge of the lake. Blanchard and Charmian Stewart paused at the entrance to the lounge, struck by the beauty of the scene outside. At the water’s edge, just a few feet away, a group of young men and women, most of them with the look and air of affluent Americans, were arranging themselves on horses for an evening ride along the beach, calling out to each other or breaking into sudden laughter.

A handsome, slender Mexican youth with the flashing smile of the Indian signaled and turned his horse along the shore of the lake, leading the riders in single file. The water lapped into their tracks in the wet sand.

The posada was the social center of the town, Charmian told Blanchard, particularly for swingers, or what passed for swingers in this part of the world. At one table a sixty-year-old red-faced American with a bull neck and a stiff back looked exactly like a retired Marine general, which he might well have been. The younger man, who acted as if he wanted to light the general’s cigar and settled for lighting their wives’ cigarettes, was his aide, Blanchard decided. And the two women, dyed blonde and dyed jet-black, respectively fifty and sixty, had the brittle, weathered smartness of career-officers’ wives.

– “Golf and bridge,” Charmian murmured. “Those are the big things around here. And good tequila or Jamaican rum at two dollars a quart. They say the party starts about ten in the morning every day. And as often as not, this is a good place to wind it up at night.”