Born on 18 January 1924 in Berlin, Germany, artist Renée George (birth name Renate Judith Georg) emigrated to the US as a stateless fifteen-year-old in August 1939, just as the second world war broke out in Europe.

George visited Ajijic during her three month trip to Mexico in the summer of 1947. When she returned to New York she was employed by the public relations magazine Modern Mexico, which published a short article she wrote and illustrated about her experiences in Mexico. The title illustration for her article is a street scene in Ajijic. 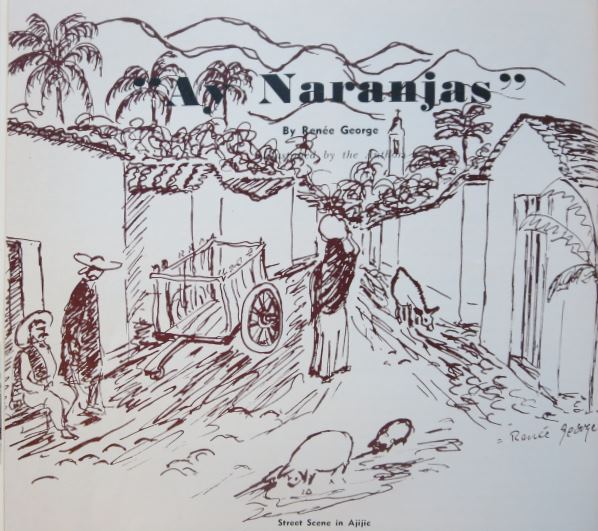 George had studied at Hunter College and taken courses in watercolor painting with William Starkweather, as well as attended night classes at the Art Students League with William McNulty, John Groth, and Howard Trafton. At the Art Students League she met her future husband Thomas O’Sullivan; they married in 1952. From 1959 onward the couple had a summer home in Martha’s Vineyard, where George was a founder member of the Martha’s Vineyard Art Association.

George later undertook illustration assignments for several books, including The River Horse by Nina Ames Frey (1953); Here come the trucks by Henry B Lent (1954); Inside the Ark and other stories by Caryll Houselander (1956); and Sixty Saints for Girls by Joan Windham (1979). She also contributed humorous drawings to the New York Times Book Review and several other publications.

Her article in Modern Mexico was written as a series of letters home to her parents.

George explains that the title of her article, “Ay Naranjas!” is the same title she would use if she ever wrote a book about all her adventures in Mexico:

– “Ay Naranjas! as I was told by a helpful Mexican has a spicy double meaning. When someone calls out Ay Naranjas! at you, and he is not selling oranges at the time, you better beware, for it is the call of the Mexican wolf.”

While in Mexico City she had the good fortune to see Diego Rivera and Siqueiros at work, and also saw paintings by Tamayo, which subsequently inspired her in the use of color.

Adjusting to Mexico brought some challenges:

“I am just beginning to understand the meanings on signs and boxes. Mexico City is particularly devoid of mail boxes, and I, being used to one at every corner, have probably mailed many a letter hopefully in a garbage can.”

Two later letters in the article are written from Ajijic, where she is staying with a friend named Hanna.

In the first, she sums up her thoughts about Ajijic:

“Am writing you this from my cot by the light of a flickering candle… Ajijic seems to the hideout for authors who have written books on Mexico (“Little Villages in the Sun,” etc) and those who are in the act of doing so. Without electric light and plumbing they get the feel of the primitive, and when they get tired of that they can always slosh through the mud to somebody’s cocktail party.

Don’t ever tell anybody you are going to Ajijic, unless of course you are talking to an artist, because you will be classed as demented. Have found no cause here for such prejudiced classification. This is one of the most charming, uninhibited places, where man and beast run around loose, enjoying their life on the shores of the lake.”

In her second letter from Ajijic, George describes the rainy season and a frustrated burglary attempt:

“It has been raining quite steadily lately, and a knee-deep river is flowing in front of our door step. Am unhappy because… all the mangos around here are spoiled because of some fly that must have sneaked through.

A few robberies have been committed lately, and our neighbor was practically paralyzed when she saw a man in a black sarape jump over her wall. When he saw here he got so scared that he climbed right back over again without touching anything. No one is wearing black sarapes around town today.

The grapevine is whispering that the charming young man who escorted Hanna and me home from the costume party last night is one of the ring leaders. I guess time will tell if no one else will.”

From Ajijic, George carried on to Cordoba and then Veracruz on the Gulf Coast, where, as she was about to return home, she was serenaded at dawn by mariachis hired by two traveling Campbell’s Soup salesmen!

George died in New York on 10 October 2010. A posthumous retrospective exhibit of her art was held at the Old Sculpin Gallery in Martha’s Vineyard in 2011.