The son of a physician, writer and poet R. Jere Black Jr. was born 27 June 1892 at McKeesport, Pennsylvania. He would also live at different times in Chautauqua, New York; Washington, D.C.; Long Beach and Santa Monica, California; and Byron Center in Michigan, as well as in Mexico. 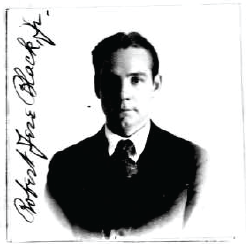 During World War I, Black served as a machine gunner with the American Expeditionary Force in France from May 1918 to May 1919. He was gassed by the Germans, which left him in ill health for the remainder of his life, with numerous spells in hospital. He married Josephine Elizabeth Best (1894-1976) in 1920. By 1937, the couple had divorced and his former wife had remarried.

It is unclear when he first visited Lake Chapala, but R. Jere Black died of a heart attack at the home of Paul “Pablo” Heuer, in the village of Ajijic, on 7 September 1953, and was buried in the Ajijic Municipal Cemetery the following day.

Black made his living from writing stories and short pieces for a number of popular magazines, both “slicks” and “pulps”, including The Smart Set, Life, The Saturday Evening Post, Breezy Stories, Battle Stories, Sweetheart Stories and College Life. His brother described him as “a brilliant, fascinating person.”

His most productive period in terms of published writings was the period 1928 to 1934. This period included three poems published in Weird Tales: “Lyonesse” (December 1928), “Masquerade” (March 1930) and “The Pirate” (August 1930), a non-fiction piece, “The Pseudo-Scientific Field,” for Author and Journalist (May 1930) which took a look at “science fiction” (a term still in its infancy at the time), and a novel, The Killing of the Golden Goose: A Christopher King Mystery Story (New York: Loring & Mussey, 1934).

Black’s wife, born as Josephine Elizabeth Best but better known as E. Best Black, was also a writer of genre fiction. Born in 1894 in Meadville, Pennsylvania, she and Jere Black married there in 1920, before traveling widely. Mrs Black wrote a story with the title “Flaming Ruth” (a pun) for Young’s Realistic Stories Magazine in February 1928 and also published two hardback novels featuring detective Peter Strangley: The Ravenelle Riddle (New York: Loring & Mussey, 1933) and The Crime of the Chromium Bowl (London: George Newnes, 1937). By 1937, however, she had divorced R. Jere Black and become the wife of Theron Lowden Kelley (1899-1967). Josephine Elizabeth Best Kelley died in 1976 in Monterey, California.