Noted American artist Hazel Hannell was already in her eighties when she chose to spend the winter months in Ajijic. Hannell became a regular visitor for several years in the 1980s. This charming costumbrista woodblock from those years was sold on eBay. Hannell continued to paint and produce artworks until she was 103 years old. 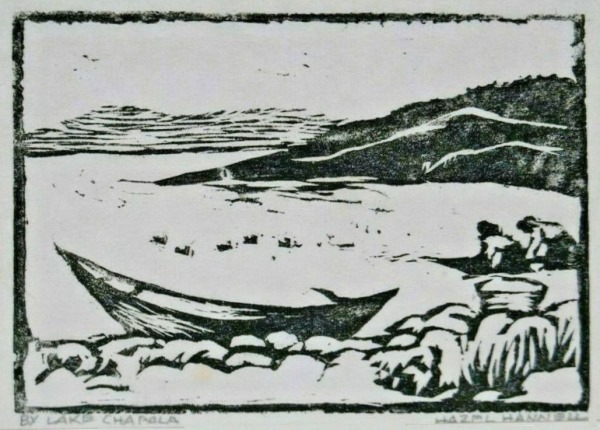 Mary Hazel Johnson (later Hannel) was born on 31 December 1895 in LaGrange, Illinois, trained as a secretary, and studied art at the School of the Art Institute in Chicago and the Emma Church School of Art in Chicago. She was an extraordinarily versatile artist. In her lengthy career she had success in a variety of media, from watercolor painting, woodblocks and red clay pottery, to tiles, murals and commercial fabric and wallpaper designs for Marshall Field.

Hazel celebrated her 28th birthday in 1923 by marrying Finnish-American artist Vinol Hannell (1896-1964). After visiting artist friends in Furnessville, Indiana, the couple built a summer home there, before moving there permanently in the 1930s.

[Coincidentally, Furnessville has a particularly strong connection to Lake Chapala. Dwight Furness, a member of the family after whom Furnessville is named, settled in Mexico in the late nineteenth century and built the famous Hotel Ribera Castellanos on a lakeside estate between Ocotlán and Jamay in the early 1900s.]

Hazel Hannell was an activist in the suffragette movement, and she and her husband were both active environmentalists and instrumental in the 1950s in helping to preserve the Indiana Dunes. The Hannells also served as leaders in the No-Jury Society and the Chicago Society of Artists, and helped found the Association of Artists and Craftsmen of Porter County.

Hannell often chose not to sign her work. At about the time of her final visit to Lake Chapala, she was quoted in a newspaper interview as saying: “Hamada, a Japanese master potter, says you really ought not have to sign things, your works should be recognizably yours.”

Hannell’s woodblock art was featured in the Chicago Society of Artists annual calendar, and her varied works have been shown in major exhibits at the Brauer Museum of Art (Valparaiso University), Dankook University, Indianapolis Museum of Art, Northern Indiana Art Salon, Gary Southern Shores Exhibit, Dunes Art Foundation, and South Bend Art Center. The Valparaiso University has numerous works by Hannell and her husband in its permanent collection.