Of all the extraordinary individuals and groups visiting Ajijic during “hippie times”, one of the most curious was the group called The Illuminated Elephants (Los elefantes iluminados).

The Illuminated Elephants visited Ajijic in 1982. The group, a traveling theatre “family” that had once been known as The Hathi Babas, adopted elements of the hippie movement, and had about twenty members at the time it visited Lake Chapala. The group’s co-founders included Mexican activist Alberto Ruz Buenfil.

The group lived in “old, converted school buses and vans,” and shared group expenses and some communal spaces, such as an office and show preparation area. They had roved the world for more than thirteen years prior to visiting Ajijic, hoping to find “a place to settle.”

Jocotepec photographer John Frost took this photo of the group during their relatively short stay in Ajijic, “camping” by the lake. 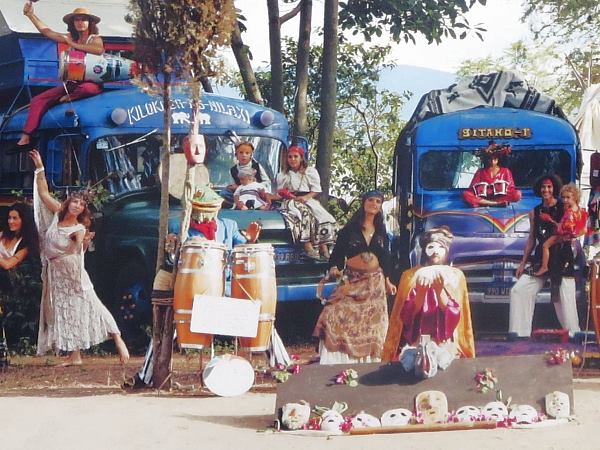 Among those traveling with this “traveling gypsy theatre group” in 1982 was Nicolas Morris, who was making a return trip to the area. As a child, Morris had lived with his artist-potter parents David and Helen Morris in Chapala in the early 1950s before the family moved back to California. Nicolas recalls that the Elefantes iluminados camped at the “old gold mill of so much legend and fame.” That property, close to the lakeshore on Calle Flores Magón, was owned at the time by “La Rusa” (Zara Alexeyewa). 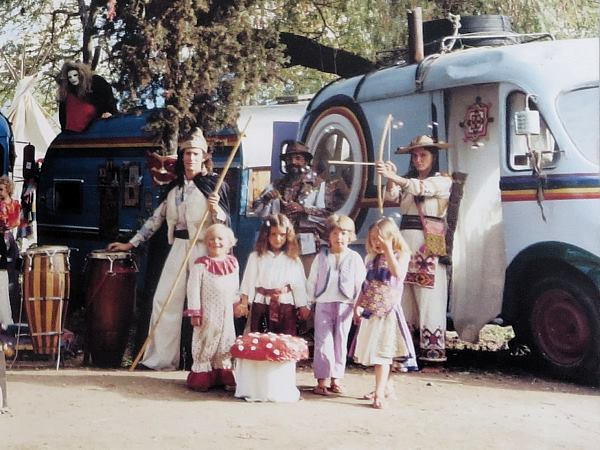 Apparently, Ajijic did not offer exactly what they were looking for as a place to settle. From Lake Chapala, The Illuminated Elephants continued on to Tepotzlán in the central Mexico state of Morelos, which proved to be their chosen destination. There they began building La Ecoaldea Huehuecoyotl, or “Huehue,” a village that embraces sustainability and now has more than a dozen homes. Residents include a wide variety of artists, poets, craftsmen, actors and musicians who offer courses and bilingual performances for schools and adult audiences while actively supporting their local communities. Huehue is a member of the Global Ecovillage Network and visitors are welcomed.

There are several interesting connections between Lake Chapala and Tepotzlán. For example, German poet Gustav Regler established his home on a Tepoztlán farm in the 1950s and lived there to his death in 1963. Several other artists who had lived in Ajijic on Lake Chapala moved to Tepoztlán in the 1970s and 1980s. They included  sculptor and painter Adolfo Riestra; photographer Toni Beatty and her husband, Larry Walsh (who all moved there in 1976); and painter and guitarist Gustavo Sendis.