Adolfo Riestra, a superb sculptor and painter, lived and worked in Ajijic from about 1971 to 1976. For most of this time, he occupied the former home (Constitución #32) of German artist Peter Huf and his wife Eunice Hunt. Riestra and his partner, Wendy Jones, had 2 young children at the time.

Riestra was born in Tepic, Nayarit in 1944. He died in Mexico City on 10 October 1989, just one day after a major exhibition of his work opened at Galeria OMR.

Riestra studied painting in Guadalajara under “Dwite” (Dwight?) Albisson from 1955 to 1956, and then took a law degree at the Universidad de Guanajuato (1962-66) where he also attended the Taller de Jesús Gallardo.

In November 1969 he held a solo show of 26 paintings at the Teatro Experimental de Jalisco in Guadalajara. The following year (1970) he worked with John Hamilton in the Potrero Hill Graphics Workshop in San Francisco, California. 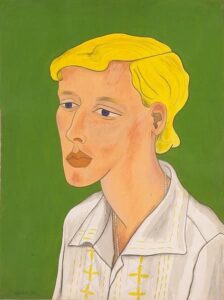 In April 1976 he held a one-person show at the Teatro Degollado in Guadalajara. 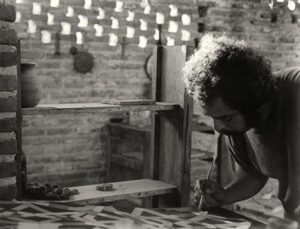 Toni Beatty. 1976. Adolfo Riestra in his studio. Reproduced by kind permission of the photographer.

Photographer Toni Beatty and her husband Larry Walsh were good friends with Riestra in Ajijic and Beatty credits Riestra with opening her eyes to the possibilities offered by abstract art.

After about six years in Ajijic, Riestra and his family moved to the village of Tepoztlán in the state of Morelos in 1976. Riestra later lived in Mexico City, in France and in Huecorio (on Lake Pátzcuaro).

After Ajijic, his work increasingly focused on modern interpretations of ancient sculptures. These works clearly show the strong influences of archaeological and folk art from several parts of Mexico including Metepec, Colima and his native Nayarit. 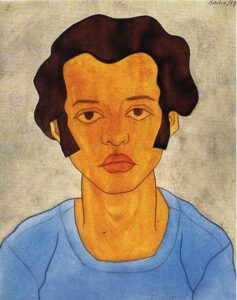 Riestra died in Mexico City on 10 October 1989 at the tragically young age of 45. Writing for a retrospective exhibition of Riesta’s works many years later, Dr. Edward Sullivan described Riestra’s untimely passing as robbing Mexico and indeed the world of a complex, multifaceted artist.

The state of Nayarit’s annual prize for contemporary sculpture is named in his honor.

Adolfo Riestra’s daughter, Melissa Riestra, is a social activist in Mexico City. Adolfo’s first cousin, Nicolás Echeverria, is an award-winning musician and documentary film maker who has specialized in documenting indigenous peoples. His works include three films about the Huichol and Cora, as well as Cabeza de Vaca (1991), Vivir mata (2001), and Eco de la montaña (2014).

This is an updated version of a post originally published on 22 March 2012.

I am grateful to Alan Bowers, Toni Beatty, Paul Huf and the late Tom Faloon for sharing their personal memories of Adolfo Riestra with me.