American pin-up girl and painter Zoë Mozert (1907-1993) lived and exhibited her artwork at Lake Chapala in the 1960s.

Mozert (birth name Alice Adelaide Moser) was born in Colorado Springs on 27 April 1907 and began painting at the age of four. After the family moved to Pennsylvania, Zoë attended Fairfax Hall, a prestigious private girl’s boarding school in Waynesboro, Virginia. After graduation, she moved back to live with her family and take art lessons at the LaFrance Art School.

From 1925 to 1928 she studied at the Philadelphia Museum School of Industrial Art, where she took advanced classes with Thorton Oakley. The “petite, pert and practical” young woman (who was just under five feet tall) paid for her tuition by modeling at the school. After her studies, she established her own window display business, and in 1932 she moved to New York City to seek freelance work as an independent designer, using ‘Zoë Mozert’ as her art name. The following year she won a scholarship to study at the Art Students League. 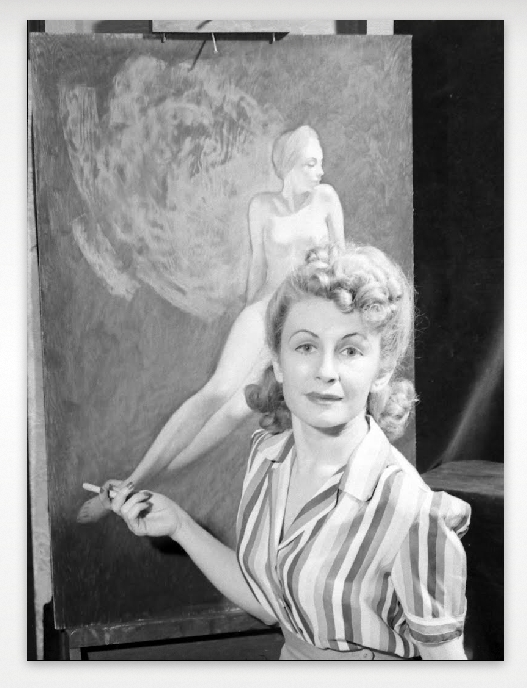 Mozert sold her first cover portrait (for which her sister modeled) to True Confessions in 1933. During the next five years, she painted and sold more than 400 cover illustrations. Mozert was her own model for many of her magazine covers and movie posters, using mirrors, cameras and an assistant to help create the desired pose. Seven color photos by Mozert, titled “Glorious Beauty of America’s Women as seen through a Woman’s Eyes,” were published in American Weekly in 1936. Her sensual and glamorous work appeared on the covers of numerous pulp magazines, including Smart Love Stories, Love Revels, and Night Life Tales, and glamor magazines such as Romantic Movie Stories, Romantic Stories, and Screen Stories. Mozert also painted artwork for advertisements, some based on her pastel portraits of famous movie stars.

While working on a cruise ship to South America in 1939, Mozert used a photo of a friend to paint her first nude. When the painting was shown in Mendelssohns Gallery in New York two years later,  it was seen by the art director of Brown & Bigelow, the largest US calendar company, based in California. He immediately offered Mozert an exclusive contract to produce calendar illustrations, the start of her lucrative twenty-plus-year career with the company. Mozert’s annual pin-up calendars called Victory Girls became immensely popular during the second world war. 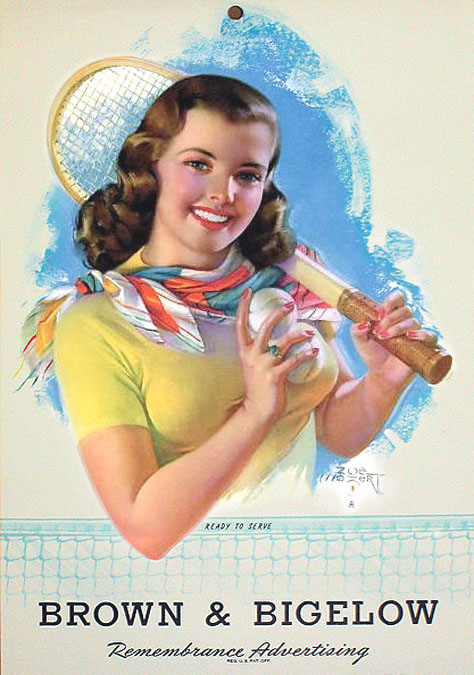 Mozert also designed movie posters and her career received another huge boost when she was commissioned by billionaire Howard Hughes to paint a publicity poster of Jane Russell for The Outlaw (1943). 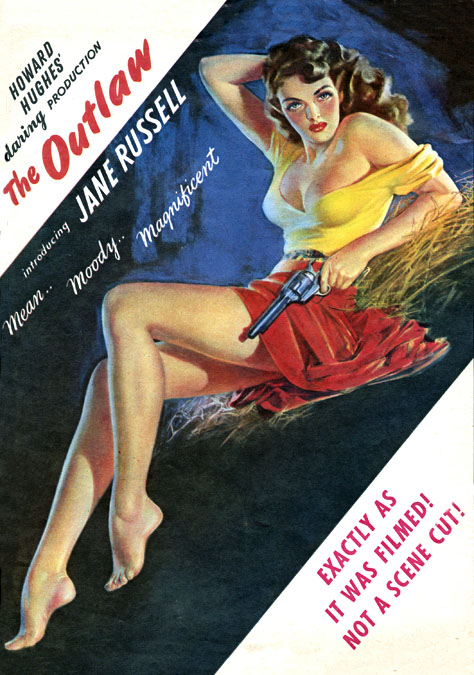 The year the film was released, the 36-year-old Mozert and her husband (the second of her four short-lived marriages) moved to Hollywood. Shortly after, Paramount Pictures produced a short about Zoë, “the pin up girl who paints ’em too” in its series “Unusual Occupations.”

In the 1950s, Mozert was at the peak of her career, reputedly the highest paid calendar artist of all time. According to one news article, between 1940 and 1960, more than 35 million reproductions of her paintings had been sold around the world.

In 1958 she married Herbert E Rhodes, “a well-known painter (of Indians, murals, and portraits) from Taos.” The marriage only lasted two years but the couple remained friends and continued to work together. When Mozert opened a gallery in Taos in 1963, the first show combined her portrait and figure paintings, with Indian subjects and caricatures by Herb Rhodes, and landscapes by Verne Matheny. 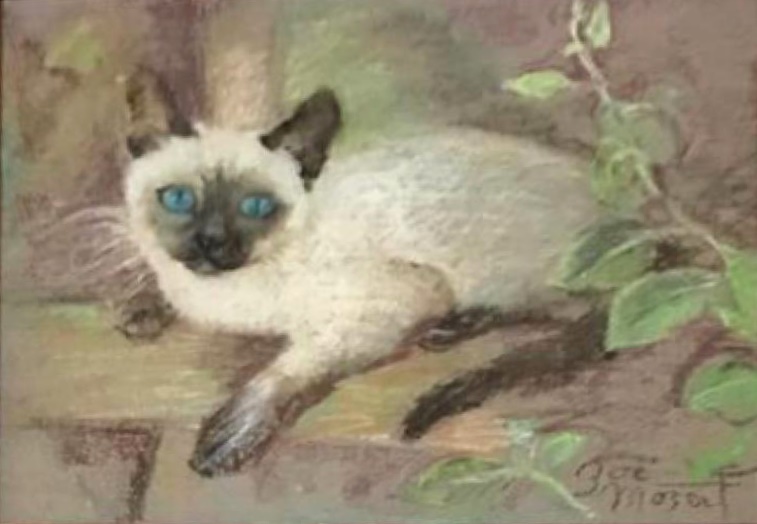 In 1965, Mozert and Rhodes visited Lake Chapala, where the “famous, vivacious artist” was reported to be getting the “feel of the village, taking a walk on our cobblestone streets.” Rhodes did not apparently stay long in Mexico, but Mozert spent four months in the country, taking in Guadalajara, San Blas, Mazatlán and Monterrey.

According to the Taos News: “At Ajijic she stayed with Mr. and Mrs. William Stallard (the former Lady Rivers), who have moved there from Canada,” and exhibited her pictures in the village. Zoë told the paper that she was impressed everywhere in Mexico with the cleanliness, since street littering wasn’t allowed. Mozert’s painting of a cat may have been a gift to the Stallards. It was later owned by photographer and linguist Friedrich Butterlin, one of the four pall-bearers at Mrs Stallard’s funeral in September 1965.

In 1978 Mozert retired to Sedona, Arizona, where she continued to produce pastel drawings and portraits, many of which were sold in fine art galleries. A shoulder injury in 1985 brought an end to her painting career. Zoë Mozert, pin-up girl, commercial calendar illustrator and artist extraordinaire, died on 1 February 1993 in Flagstaff, Arizona.