Born in Portland, Oregon, on 19 January 1935, Fullerton had already exhibited at the City Lights Bookstore in San Francisco (one of the favorite venues of Beat era poets and artists) and held a solo show at the Telegraph Hill Gallery, in that city in 1958 before he moved to New York where he studied at the Art Students League (1959-60), became friends with George Grosz, and held solo shows at the European Gallery (1959) and the Hilda Carmel Gallery (1960).

After a short period of service in Korea and Japan with the US Marines, Fullerton spent a year or two at Lake Chapala, before settling in the Santa Cruz area of California in the mid-1960s. His wife, Gail Putney, was the first female president of San Jose State University. The couple moved to Coos Bay, Oregon, in the 1990s. 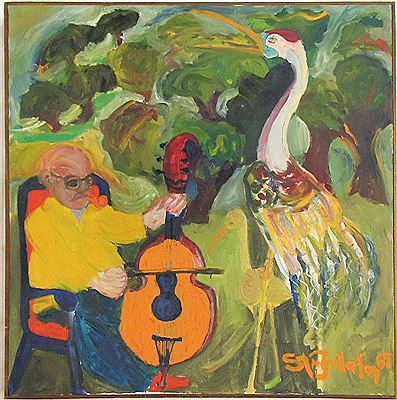 In the words of journalist Mark Marinovich:

Fullerton’s expressionistic paintings, prints and drawings are populated by improbable characters juxtaposed in even more improbable circumstances.”
– “ “I paint human folly. I paint authority figures as fools, and fools as authority figures.” Fullerton champions self-expression, which, he asserted, is generally lacking in American art.” Exhibit of work by Stan Fullerton, 2017.

Fullerton’s friends during his time in Chapala included guitarist Jim Byers. Byers and Fullerton were also close buddies in Santa Cruz. Fullerton was bartender at The Catalyst, where Byers—dubbed “The First King of Lompico” by one regular—often played classical guitar for tips.

Stan Fullerton had been widowed two years when he died in Coos Bay, Oregon, in 2018.

The story of El Manglar is told in chapter 34 of If Walls Could Talk: Chapala’s Historic Buildings and Their Former Occupants.

Several chapters of Foreign Footprints in Ajijic: Decades of Change in a Mexican Village explore the history of the vibrant art community of Ajijic.