Howard Baer, born 1906 in the small mining town of Finleyville, Pennsylvania, died in 1986 in the city of New York. Baer was a writer, painter, illustrator and cartoonist, whose first known solo exhibition in 1941 was a showing of paintings resulting from several months of work in Mexico, based in the town of Chapala.

Baer studied art at the Carnegie Mellon Technical Institute in Pittsburgh before moving to New York in 1929. New York remained his home base for the rest of his life, though he traveled widely, with extended spells in Mexico, France, the U.K., China and India. 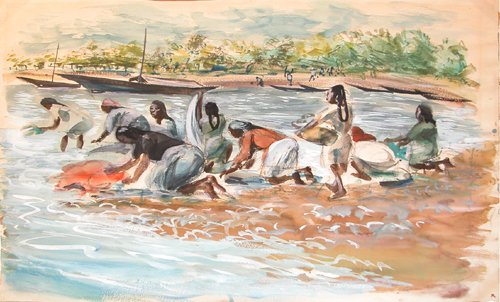 Prior to his trip to Chapala, Baer’s drawings, illustrations, and cartoons had appeared, to considerable acclaim, in The New Yorker (1933-1937), Esquire and various other mainstream magazines. In about 1937 he married fashion model Lenore Pettit. The couple divorced seven years later in 1944, and Pettit would later befriend and eventually marry artist Matsumi (Mike) Kanemitsu (1922-1992), a close friend of Jackson Pollock (1912-1956).

Baer’s first opportunity since high school to devote himself to plein air easel painting came in 1941 when he spent several months in Chapala. It is unclear if his wife accompanied him on this trip. The resulting series of paintings, together with a large mural of the town, were exhibited in September 1941 in the gallery of the Associated American Artists in New York City. Critics’ praise of his talent was unanimous. The exhibit handout was entitled: “This is Chapala”. 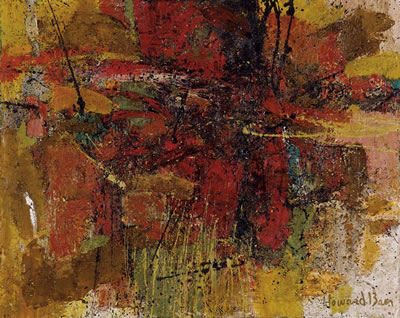 During the war, he was chosen as a Navy artist, responsible for a series of drawings and paintings of WAVES (“Women Accepted for Volunteer Emergency Service“) in aviation. He was later sent overseas to record actual battle warfare in the China-Burma India Theater of Operations.

Following the war, Baer illustrated children’s books on China and India. He lived for several years in Paris (1948-1951), wrote and illustrated a children’s book called Now this, now that (1957), taught art at the Henry Street Settlement, and at Parsons School of Design, in New York City, and also lived at least part of the 1960s in London, England.

His works can be found in many museum collections, including the Museum of Modern Art; Walker Museum, Youngstown, Ohio; the Pentagon Archives of War, the Butler Institute of American Art; The Fred Jones Jr. Museum of Art, University Of Oklahoma; The Navy Museum-US Navy Art Collection; and The Nelson-Atkins Museum of Art.