Born 9 November 1906 in Richmond, Indiana, Charles Frederick Surendorf was an artist and printmaker, whose intricate linoleum block prints have been favorably compared in quality to the much-acclaimed work of Thomas Hart Benton.

Surendorf studied at the Art Institute of Chicago and the Art Students League in New York, as well as two semesters at Ohio State University in the Fine Arts program, before moving to California in 1929, arriving in Los Angeles “seated on an orange crate strapped to a Model T Ford chassis.”

He moved to San Francisco in 1935, where he studied at Mills College, was active in the local art scene, and was director of the first San Francisco Art Festival. By 1937 he had made his first painting excursion to Columbia, an evocative ghost town in the Sierra foothills of California, which appealed to his social realist leanings. He would eventually settle in this town with his second wife, Barbara Stoner, whom he married in May 1949. 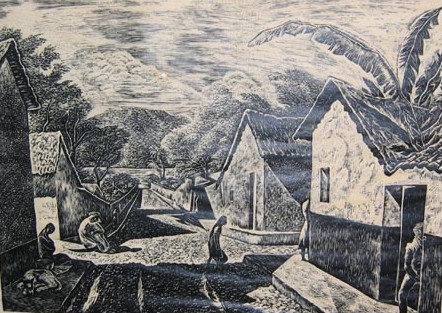 During the 1940s, Surendorf traveled throughout the South Pacific, painting numerous watercolors and making woodcut views of places such as Bora Bora and Moorea. He traveled widely (including trips to New Zealand, Tahiti, New Orleans, Arizona and Mexico) and used sketches made during his travels to produce linocuts on his return home.

After the family settled in Columbia, California, Surendorf made his living as an artist and lived in the town for the remaining thirty years of his life.

Between 1934 and 1971, Surendorf produced more than 250 woodblock prints and linocuts. While best-known for his linocut images of Northern California, Surendorf also produced oils, watercolors, pastels and sculpture, in a variety of styles, ranging from naturalistic scenes to abstracts, surrealism and fantasy.

In 1956, Surendorf served as director of the short-lived Mother Lode Art School. In 1959, Art Digest called him one of the top twenty-five woodblock artists in the world.

Surendorf’s first visit to Mexico was in 1963 when he took the entire family—his wife, Barbara, and their four children, Charles Jr, Tamara Karla, Stephanie, and Cindy—on a 6000-mile month-long trip to “make a survey of the most paintable spots in Mexico for longer work in the future.” Surendorf quickly decided that Mexico offered a treasure trove of subject matter for painters, and saw innumerable painting opportunities: “Some of the most interesting painting spots are the ghost towns of the early Mexican mining days.” During that first trip to Mexico, Surendorf completed 35 watercolors from which he planned a series of linoleum-block prints.

He definitely visited Lake Chapala on this trip, as shown by this account of an attempted shake-down, reported shortly after returning home: “While painting a fishing boat on the shores of Lake Chapala, two Mexicans tried to extract a fee from me for allowing their boat to be used in the painting. While we argued in vain, the owner of the boat came up and paddled away.”

His daughter Cindy recalls a family trip to Mexico in 1968, when she was ten years old. During their time in Ajijic, Surendorf made the preliminary block print sketches needed to carve his printing blocks back in California.

Surendorf has been described as “a rugged and opinionated character”, who “was known to have torn down his art exhibitions in the middle of previews (in one case at the prestigious Maxwell Gallery in San Francisco.)” He alienated many critics which may explain why his work was under-appreciated during his lifetime.