One of the more interesting characters that made Ajijic a lively place to be in the early 1950s was the black American artist Ernest Alexander, known to most people simply as “Alex”. Alex was a painter and photographer who, from about 1950 to 1952, ran the Club Alacrán (Scorpion Club), a restaurant-bar in Ajijic, the hang-out of choice for the resident artists and writers of the time. 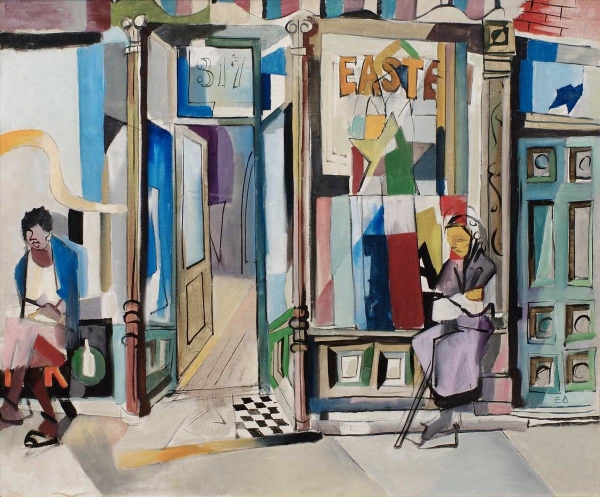 Relatively little is known for certain about Alex, though he is the subject of a fascinating memoir written by Sean Wilder. Wilder first met Alex in 1958, when the latter was living on handouts in the North Beach area of San Francisco. Wilder, later a practicing psychoanalyst, was only a teenager at the time but spent much of the following two years trying to comprehend Alex, while simultaneously questioning his own motives and desires. Wilder’s book, Alex, provides some telling insights into Alex’s charismatic, almost guru-like personality. In an epilogue to the book, Wilder sketches out what little biographical information he has gleaned about Alex, either from Alex himself, or from a select handful of people who knew Alex both in Ajijic and in San Francisco.

Alex was the man sitting in the corner seat, a long, lean, handsome, “black”… with alert, mischievous, seductively heavy-lidded eyes, probably wearing a khaki army surplus shirt and blue jeans with frayed cuffs, and badly scuffed brown leather shoes, but no socks. No rings, either, no watch, no jewelry of any kind decorated him.”

Alex intimated to Wilder that he had spent his childhood in Long Branch, New Jersey, and that there was, or had been, money in the family. Wilder describes how Alex spoke “educated Eastern Seaboard English”, with an impressive vocabulary, and used language colorfully, as a form of “oral poetry”. Alex was a verbal gymnast, giving quick retorts and enigmatic responses.

Following a period of military service in a communications unit in the Pacific, Alex returned to civilian life after the second world war, with a metal plate in his head, and used his G.I. Bill funding to take art classes at the South Side Community Art Center in Chicago. Alex’s magnetic appeal helped foment the nascent jazz and poetry scene of the Art Circle (a housing community for artists) on the near north side of Chicago. Among the poets that Alex became close to were Bob Kaufman, Gwendolyn Brooks and ruth weiss, who would herself visit Ajijic in the late 1950s.

Alex’s influence on ruth weiss was profound. He is credited with persuading her to read her poetry to live jazz for the very first time:

In 1948 weiss took a room at the Art Circle on the near north side of Chicago. She began listening to Bop and reading her poetry to audiences there. In 1949 an African American painter named Ernest Alexander asked her to read with the Art Circle jazz ensemble. She accepted the invitation and has been reading to jazz ever since.” (Blows Like a Horn: Beat Writing, Jazz, Style, and Markets in the Transformation of U.S. Culture, by Preston Whaley, Harvard University Press, 2009) 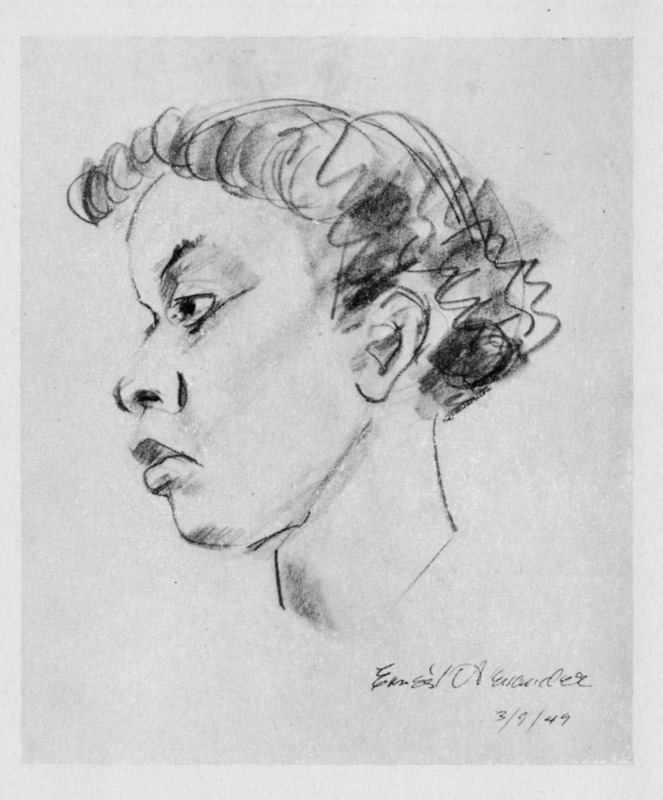 Gwendolyn Brooks, a close friend of Alex, became the first black writer to win a Pulitzer when she was awarded the Pulitzer Prize for Poetry in 1950 for her second collection, Annie Allen, published the year before. The frontispiece of Annie Allen is Alex’s simple, yet powerful, portrait of Brook’s head, an illustration also used on the book’s dust jacket.

According to George E. Kent, the author of A Life of Gwendolyn Brooks, Brooks’s poem “A Lonely Love”, published in 1960, is entirely about her intense personal relationship with Ernest Alexander.

In 1949, the same year that his illustration was used for Annie Allen, Alex had a painting chosen for inclusion in the “53rd annual showing by artists of Chicago and vicinity”, a major exhibit at the Art Institute of Chicago. This was a significant achievement for a painter who was apparently largely self-taught. The painting in question, entitled “Shop Front and Doors”, was priced at $350.

Among the other artists included in the exhibition were George Buehr (a professor of art for many years at the Art Institute of Chicago) and his wife Margo Hoff. Buehr, and possibly Margo, had spent some time in Ajijic a few years previously, and may well have provided the inspiration for Alex’s decision to transfer his G.I. Bill funding to the Fine Arts school of the University of Guadalajara later that year.

In Mexico, Alex studied painting, sculpture and photography, and also met Dorothy Whelan, a Canadian whose husband was serving seven years in a Mexican jail for passing bad checks. Alex and “Dolly”, as she was known, set up house in Ajijic, where Dolly, at least for a time, was a cook at the Posada Ajijic. Among their close friends were painter-potter David Morris and his wife Helen, a former dancer. San Francisco Bay area sculptors Robert McChesney and his wife Mary Fuller were also both in Ajijic at this time. 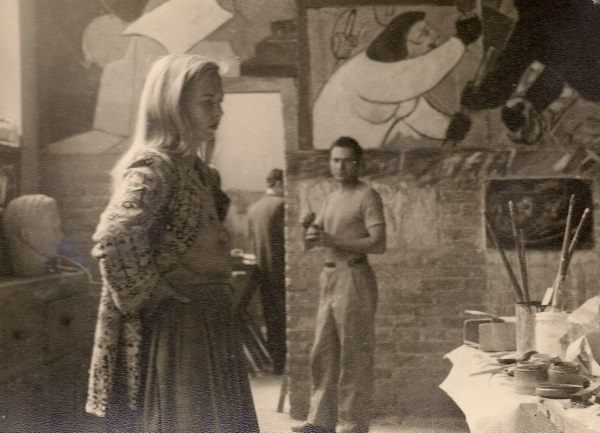 In Ajijic, Alex opened a restaurant-bar named Club Alacrán (Scorpion Club), which was in operation from about 1950 to 1952. The club attracted locals and expatriates alike. Alex instituted a two-tier pricing system, charging Mexicans less than Americans for their drinks.

Katie Goodridge Ingram remembers the building well, because it had previously been the studio of her step-father, the artist and sculptor Mort Carl. The Club Alacrán, on Calle Constitución at its intersection with Ramón Corona, “was set up in a small two-room house with a patio and kitchen area. Alex was a very jolly, welcoming and bright host. It briefly became “the” place.” Ingram also recalls that Alex was a fine cook with a penchant for hosting massive barbecues on the beach.

While he was running Club Alacrán, Alex was visited by the ethnomusicologist Sam Eskin. The second part of Eskin’s sound recording entitled Mexican firecrackers: a prayer and a festival (Smithsonian Folkways, 2001) was recorded from the patio of the Scorpion Club and features a religious festival in Ajijic, complete with church bells and pre-dawn firecrackers.

Eskin is quoted in the cover notes as recalling that, 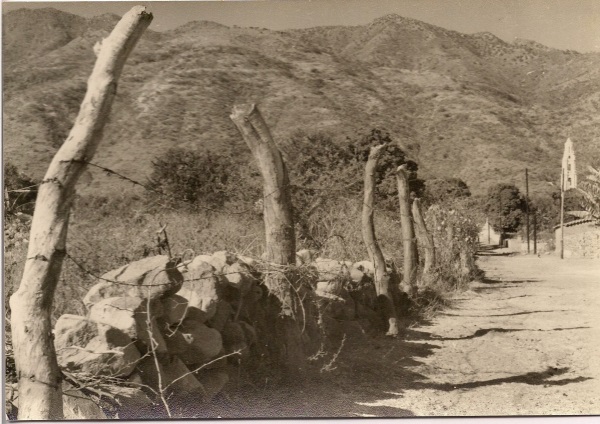 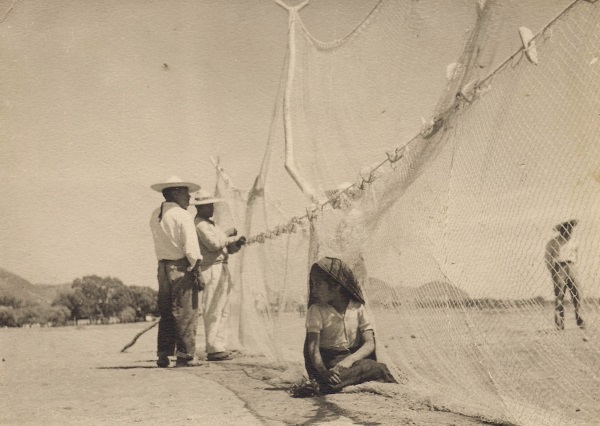 Little is known about the whereabouts of Alex’s artwork from this time, though in the late 1950s he showed Sean Wilder some small masks that he had sculpted and some photos of paintings. Wilder describes one of Alex’s paintings, almost certainly of Lake Chapala:

His paintings were as calm and meditative as his sculpture was full of violent vitality. One of them made a particularly strong impression on me: what appeared to be a fisherman’s shack (I recall a net and floaters hung out on a wall to dry) in the full golden blast of a sun-drenched late afternoon, while above and behind it the sky was blue-gray with ominous storm clouds.” (Alex, p 173)

Unfortunately, the good times for Alex did not last long. In December 1951 or early in 1952, a serious altercation broke out in the bar during which he almost strangled one of his patrons. Even the birth of Alex and Dolly’s son Mark a few months later was only a temporary respite for the couple. Soon afterwards, Dolly’s husband (John Thomas Babin), having escaped or completed his sentence, returned to Ajijic demanding his wife back. Another huge scene ensued. Alex was forced to give up the Club Alacrán. By April of the following year (1953), he had been expelled from Mexico under the infamous Artículo 33, that section of the constitution which allows Mexican authorities to expel “undesirable” foreigners without due process. Dolly and Mark accompanied him to San Francisco. (Coincidentally, their friends David and Helen Morris returned to the San Francisco Bay area at about the same time.)

In 1953, Ernest Alexander was one of 14 artists (with Robert McChesney, Lenore Cetone and others) exhibiting in Sausalito, California, at the annual Spring Art Show at the Sausalito Art Center from 29 March to 12 April 1953. A Sausalito News piece in June 1953 refers to Alex and his wife as “the Ernie Alexanders of Marin City”, when listing the artists who attended an art show at the Tin Angel on the Embarcadero in San Francisco. In August 1953, the same newspaper lists Ernest Alexander, of “208 Second Street”, as the chairman of the exhibition committee for the second annual Sausalito Arts Center Fair to be held at Shell Beach in mid-September, alongside the annual Regatta.

By 1955, Alex’s world began to unravel. In February 1955, police were called to a “fracas” at the annual Sausalito Artists Ball. According to a press report:

“Charles Carmona, an employee of St. Vincent’s School for Boys north of San Rafael, was given first aid by the Sausalito fire department to check the bleeding from severe facial cuts. He told police that Ernest Alexander, former Sausalitan now living in San Francisco, hit him in the face with a beer bottle after he had danced with Alexander’s wife. Carmona claimed the blow splintered the bottle and police said the injured man had deep cuts on his forehead, nose, chin and both cheeks. Alexander denied he hit Carmona with the bottle and witnesses to the fracas said they did not see Alexander wield the weapon.” No charges were laid because “Carmona refused to sign a complaint against Alexander”.

At some point in 1955, Dolly died in hospital while undergoing a second mastectomy. Alex, distraught, began to fall apart. As Alex slid towards insanity (perhaps due to general paresis caused by late-stage syphilis), Mark was taken into the local foster care system.

For the remaining 15 years or so of his life, Alex was never the same. He stopped painting, spent time in state mental institutions, developed paranoia, and lived for extended periods on hand-outs. It is at this stage of his life that Sean Wilder first met him. Wilder recalls that while Alex no longer painted, he enjoyed listening to the music of Billie Holiday and loved cookbooks, reading and valuing them like other people read poetry or novels.

The final chapter in the tragic story of Alex’s final years ended in February 1974. The precise date is unknown because he died alone in his apartment at 138-6th St, San Francisco, and his body was not found until four months later. He was buried in Willamette National Cemetery, Portland, Oregon, on 25 July 1974.

While Alex’s contributions to the Ajijic art scene have been largely forgotten or ignored, his place in the Chicago art scene has been recognized by the inclusion of his paintings in two major group exhibitions:  “Black on Black: The Works of Black artists from Chicago Black Collectors” (University of Illinois at Chicago, 1983) and “The Flowering: African-American Artists and Friends in 1940s Chicago: A Look at the South Side Community Art Center”, (Illinois State Museum, 1993).