Born in 1928, ruth weiss is a renowned American poet, playwright and artist, best known for reciting her poetry to the accompaniment of live jazz. She visited Ajijic and Chapala briefly during an extended road trip to Mexico in 1958-1959, with her husband and her dog.

weiss was born in 1928 into a Jewish family in Berlin. Her family left Berlin for Vienna in 1933 and then relocated to New York in 1938. weiss lived for a time in Chicago, but eventually settled in San Francisco in 1952.

In Chicago, in 1949, weiss first met Ernest Alexander (“Alex”), who played a decisive role in persuading her to start reading her poetry to jazz. In I Always Thought You Black (a tribute to her African American artist friends), weiss wrote that,

ERNEST ALEXANDER long & brown listens to my poem. in my black blue-bulb room.
pulls me upstairs. sez now read to these folks. they gotta hear this.
my first own home. my first turntable. my first modeling nude. my first poetry aloud.
someone blows a horn. someone brushes a drum. i’m reading to jazz man.”

This quickly became a trademark of readings by ruth weiss. 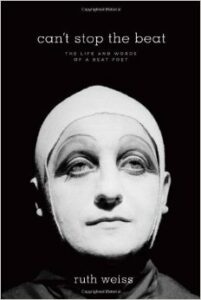 A year or so after they first met, Alex left Chicago for Mexico where he lived and worked for a few years in Ajijic on Lake Chapala. weiss moved to San Francisco, where she became a prominent member of the counter-culture movement of San Francisco, and good friends with the likes of Jack Kerouac, Bob Kaufman and surrealist poet Philip Lamantia. In the 1960s, she started to use only lower case for her name in a symbolic protest against “law and order” since in her birthplace of Germany all nouns are capitalized.

For example, weiss writes about how she and Alex used to work together:

Oh ALEX lover of my first woman-lover JERI WANTAJA. your
paintings of birds. your studio bright & wild with their
flight. your studio a three-cornered touchstone where i
write in a corner. look out at warehouses trucks dawn.
come rain come shine.

weiss also describes how she met Alex again several years later, in San Francisco, after Alex’s return from Mexico in 1953:

oh ALEX. is it 1955 or 6 or 7. THE CELLAR. san francisco
north beach. where i had started poetry & jazz. you walk
in. i carry glasses & bottles. almost drop them. we hug.
your wife with you. your first-born soon after. it’s all a
blur. your wife and boy dead. mexico.

weiss’s links to the Lake Chapala area would be tenuous at best (and only by proxy via Alex) were it not for her extended road trip to Mexico in 1958-1959, with husband Mel Weitsman and dog zimzum. They left San Francisco on Tuesday 14 October 1958 and returned in early February 1959.

In Can’t stop the beat, the life and words of a Beat poet, published in 2011, weiss includes her narrative poem COMPASS, her diary of the trip to Mexico. Her entry for Ajijic reads,

oct. 31 … ajijic aside-town where many i have known have been … divided
… there the square and park … we leave the car … to wander slowly
pebbled street … sleepy hot … a place … a face familiar … we must have
known each other’s presence … then … the house to look for … he was in
it … bill filling the window now … the girl in jeans and black is smile
and small … ny to sf … mexico city … she is here now … art later …
bill and he split one scene for this one … we fill the house … it’s lori’s
… a legend … romana is the maid or more than … two nights around …
past halloween … the ghosts have dog-voices against the moon … another
stranger met again … she is blonde in the dark house … all in the hosue
… the glass room catches us … each one … the orange cat the guardian …
we leave the halloween by day … the lake around … the road is village …
the space between … the lake is low … or have the lake-plants grown this
noon … each cow a slow a sudden focus … the earth people move slow …
each step an earth-beat … the burro the boy the woman the urn … the man
the wood … eyes in the stone … blue mountains from the far red plain …
the sky the whirr the clouds … rain a shaft between two black mountains …
red road to a red town in a red plain … the corn is dry …

As Matt Gonzalez has written, “Part travel journal and part surreal dreamscape, no text of the beat era captures Mexico with more authenticity and immediacy than weiss’s 80-page COMPASS.”