Clement Woodward Meighan (1925-1997) was an archaeologist who undertook field research in southern California, Baja California and western Mexico. His main link to the Chapala area is that he was the lead author (with Leonard J. Foote as co-author) of the monograph, Excavations at Tizapán el Alto, Jalisco (University of California Los Angeles, 1968).

Tizapán el Alto is the largest town on the southern shore of Lake Chapala. Foote led two fieldwork seasons at the site, and among the research students and volunteers helping on the dig was painter and muralist Tom Brudenell. 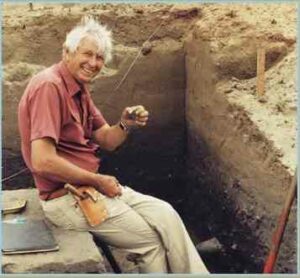 Photo from cover of Onward And Upward!: Papers in Honor of Clement W. Meighan

Born in San Francisco, Meighan also lived in Phoenix, Arizona, (to recover from double pneumonia contracted before he was five years old) and in California’s San Joaquin Valley.

He first visited Mexico at age 17, when he spent several months in the country, traveling by the cheapest means he could find, which included 4th class trains. The following year, at age 18, he was drafted into the U.S. military. He was severely wounded while on active service in the second world war and spent three years in and out of military hospitals, before finally being discharged, still with a permanent limp. After the war ended, he used G.I Bill funding to study at the University of California, Berkeley, gaining undergraduate and doctoral degrees in anthropology, in 1949 and 1953 respectively.

In 1952, Meighan was appointed instructor in anthropology at the University of California, Los Angeles (UCLA). He remained at UCLA for close to forty years before retiring from that institution in 1991. His contributions to UCLA (and to archaeology) were considerable. He founded the university’s archaeological survey, chaired its anthropology department, and played key roles in several regional and national organizations.

Meighan made important contributions to the fields of faunal analysis, rock art studies, and obsidian hydration analysis. He was one of the first modern archaeologists to recognize the importance of scientifically excavating sites in western Mexico. Since Meighan’s early work, several archaeological sites in Western Mexico, including El Ixztepete and Guachimontones have been partially restored and opened to the public.

Among his more noteworthy students at UCLA was writer Carlos Castaneda (The Teachings of Don Juan; a Yaqui Way of Knowledge, 1969). Taking Meighan’s class “Methods in Field Archaeology”prompted Castaneda to undertake a deeper study of Shamanism.

Meighan accompanied the 1962 expedition funded by mystery writer Erle Stanley Gardner to record painted rock shelters in central Baja California. That expedition led to Gardner writing an article for Life and the book The Hidden Heart of Mexico (1962) as well as Meighan’s later academic account of the paintings in a 1966 journal article.

Meighan’s books on archaeology include: Californian Cultures and the Concept of an Archaic Stage (1959); A New Method for Seriation of Archaeological Collections (1959); Archaeology: an Introduction (1966); Prehistoric Rock Paintings in Baja California (1966); Indian Art and History. The Testimony of Prehispanic Rock Paintings in Baja California (1969); The Archaeology of Amapa, Nayarit (1976); Messages From the Past: Studies in California Rock Art (Monograph XX) (1981); Archaeology for Money (1986). Meighan was also co-author of numerous works including Sculpture of Ancient West Mexico: A Catalogue of the Proctor Stafford Collection at the Los Angeles County Museum of Art (University of New Mexico Press, 1989) and Discovering Prehistoric Rock Art: A Recording Manual (1990).