Ralph Jocelyn McGinnis (1894-1966) was a sports writer, publicist and painter who lived in Ajijic during the early 1960s and penned an article about the area entitled “Lotus Land”. 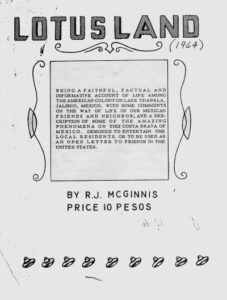 “Lotus Land” was written initially in 1964 as an open letter to friends in the U.S., but McGinnis subsequently sold copies in the Lake Chapala area in 1965, and it was published, much later, as a series of nine article, in El Ojo del Lago, from June 1994 to February 1995 inclusive.

“Lotus Land” was subtitled: “Being a faithful, factual and informative account of life among the American Colony on Lake Chapala, Jalisco, Mexico, with some comments on the way of life of our Mexican friends and neighbors, and a description of some of the amazing phenomena on this Costa Brava of Mexico. Designed to entertain the local residents, or to be used as an open letter to friends in the United States.”

The following brief extracts will give readers some idea of the style and range of material included in “Lotus Land”:

This is Lotus Land, the land of the colonels and the afternoon cocktail, the land of the mozo and the extra maid and rum at a dollar a bottle. This is the Costa Brava of Mexico, where Mexicano and Americano meet and mix, like oil and water. And it is the land of un momento.

This is Ajijic, Chapala, Chula Vista and their environs where some hundreds of American families have built their luxurious lairs among the adobe houses of the Mexicans. The three pueblos nestle between the shore of lake Chapala and the mountains. Chapala is built on a spit of land projecting from the north shore of the lake, and was a famous watering place for the rich and poor of Guadalajara long before the gringos came….

Chula Vista sprawls on the slopes of a crescent of mountain about two miles west of Chapala on the lake shore. Chula Vista, with one or two exceptions, is exclusively Americano. Its luxury homes make a slight and condescending bow to the Mexican way of life by adding patios and walls, but it is essentially transplanted California. It is said that its inhabitants look down their noses at their unfortunate compatriots living in Chapala and Ajijic, albeit it is all in fun. Chula Vista sports a nifty golf club and most of the homes have pools, electric kitchens, and poodles.

Ajijic, a mile and a half west of Chula Vista along the lake, is the den mother of the three communities. Discovered by a group of impecunious artists soon after World War II, It was then a sleepy Indian village given over to the pursuit of Lake Chapala sardines and the bucolic crafts of animal husbandry, maize cultivation, and wood cutting. The artists fell among the natives like a drop of water in a mill pond – there was a slight ripple and the two became one – frijoles, no bathrooms, tacos, no sewers and no barbers.

Then the States-side newspapers and magazines, on a wave of nostalgia, began to thump the tub for the Shangri-la aspect of this Mexican paradise. Soldiers retiring after the war got wind of it, and the invasion was on. The adobe houses were bought and leased, white washed, a shower and bath added. The newcomers clamored for light and water, and the Mexican government, awakening after four hundred years of somnolence, tapped a mountain spring and brought the water into the pueblo….

The more affluent of the invaders built new homes or made elaborate changes in the old houses. They hired the women and girls as cooks and maids, the men as gardeners and handy men. Wages, from thirty pesos a week at the beginning, climbed to fifty, sixty, and on up to ninety and a hundred….

The typical Lakeside male awakens just before nine o’clock, yawns, stretches, sneezes and goes to the bathroom, where he finds that the toilet doesn’t work. He cusses the Mexican plumbing and his arthritis and has his breakfast served in the patio by the maid. He them bedecks himself for the golf course, and joins a trio of his friends for nine holes, winning a peso by a stroke of good luck. He will then repair to the game room at the club, and may win another peso at gin. It is now one o’clock, he has had three rums and feels prepared for the steak (at 60 cents per T-bone) which will be served at home. He has his comida, yawns, stretches, and seeks a quiet, dark corner for a siesta.

At five or thereabouts comes the cocktail hour….

The housewife is the chief exponent of the vocal arts in Mexico. Whereas the men rarely sing except when stimulated by tequila, in love or for a living, the housewives sing all day long. The chorus is well under way by five o’clock in the morning, and continues far into the night. One gets accustomed to these symphonic decibels and after a while they go in one ear and out again.

Under fine arts must come acting and entertaining. Frustrated actors and entertainers, as well as retired professionals, could not be held in check forever. Under the able direction of Mrs. Betty Kuzell, a theatre group suddenly blossomed into a lively and amazing organization. Musicals, burlesque, light drama, and variations of old-time vaudeville draw crowds to the redecorated waiting room of the old railroad station. Latent talent has been developed and the old pros leaven the amateur efforts. While there has been the customary pulling-and-hauling and displays of artistic temperament and professional jealousy, everybody is having a good time. Many people are keeping out of mischief as their energies are dissipated on the Thespian boards….

The Lakeside has had bad press in the States, bad because it has exaggerated conditions, especially the cost of living. While it is true that one can get a haircut for twenty-five cents and a good bottle of rum, gin or brandy for a dollar, a can of corned beef costs $1.25 US. Cranberry sauce and canned asparagus are equally high, and Campbell’s soup, made in Mexico, is 32 to 45 cents a can. Tailoring is cheap but the cloth is expensive. The fruits of the country, citrus, melons, mangos, avocados, bananas, pineapples are cheap and good. There are no frozen foods, no TV dinners for the quick snack, and only a limited and inferior variety of canned fruits and vegetables. Residents who go to the border load up with US goodies to tide them through.

The family budget is stretched by the absence of the monthly telephone bill. There is one telephone in Ajijic, two available in Chapala and one in Chula Vista. This is both a blessing and a curse. You save money, but should an important guest be lost at the airport, there is no way to catch up with him until he arrives by taxi some hours later….

One saves on gas and wear-and-tear by shunning night driving. Unless its an emergency, only the daring drive at night. The highways are open range, and cattle, horses, burros and other livestock wander at will, blend into the pavement, and won’t budge. Many of the trucks, of ancient US vintage, have no tail lights, and when there is a breakdown it remains where it stops, with a fine disregard for life and limb. It is a serious offense to kill an animal and if caught you may expect a turn in jail. This encourages a hit-and-run policy on the part of both the foreigners and the Mexicans….

Many of the Mexican elite of Guadalajara maintain elaborate summer or weekend homes in Lakeside. These people are seldom seen in public, do not cotton to the foreigners and could teach anybody in the world how to live in the grand manner. A poor Mexican is generous, a rich Mexican is unbelievable. He knows how to spend money and keeps in practice both in his home, at his club and where ever his well shod, perfectly tailored persona happens to be. Should you be invited to his home you will be entertained within an inch of your life and if he calls you “friend” a host of his connections are at your service.