Ruth Ross-Merrimer and her husband Robert Merrimer first lived in Ajijic in 1986 and she returned there in 1999, shortly after her husband’s death in Tucson, Arizona. In 2004, she moved to Palm Springs, California, where she died on 6 June 2011, at the age of 86.

While living in Ajijic, Ross-Merrimer wrote and self-published Champagne & Tortillas (2001) which is set in a retirement community that seems surprisingly like Lake Chapala and Ajijic, despite the disclaimer at the start that:

“Champagne & Tortillas  is not a roman a clef. To all who may believe they recognize one or more of its characters, I can only say that your imaginations are working overtime. This is a work of fiction, and the characters who cavort through its pages are figments of my own imagination.

Just as the place called Lake Azul will not be found on any map of Mexico, the characters in Champagne & Tortillas were conceived from bits and pieces of all the people I have ever known..”

The back cover blurb for Champagne & Tortillas describes it thus:

“In a blend of fiction and historical fact, the novel chronicles the lives of a tightknit group of mainly U.S. expatriates, living in a town in Mexico called Lake Azul. They spend lazy days loving, hating and backbiting; their passion for one-upmanship exceeded only by their unrelenting interest in each other and each other’s lives. But when one of them is mysteriously murdered by two others in the colony, it becomes a recipe for the perfect crime.” 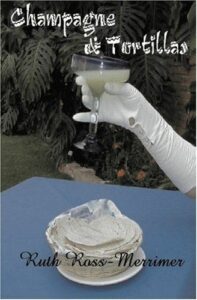 Ruth Ross (later Ross-Merrimer) was born in St. Louis, Missouri, on 26 May 1925. She studied at St. Louis University and worked as a professional singer on tourist boats on the Mississippi River.

She moved to Southern California in 1962 where she was invited to record a song for a documentary film being made by Robert Merrimer (1908-1999) of Keystone Productions. She and Bob married and first visited Ajijic in 1966 after the film company was asked to produce seven documentary publicity films for the Mexican National Tourist Department, ahead of the Mexico Olympics of 1968.

The couple traveled all over Mexico shooting the Tourist Department movies, with Ruth working as a researcher and scriptwriter, and from 1968, established their home in Puerto Vallarta, where they lived for about a decade.

After her return to Ajijic in 1999, Ross-Merrimer reported on local news for the Guadalajara Reporter (1999-2003) and other English language publications, including El Ojo del Lago. She was a founder member of the Ajijic Writers Group.