Award-winning novelist Glendon Swarthout (1918-1992) wrote 16 novels, many turned into films, and numerous short stories. His short story entitled “Ixion”, set at Lake Chapala, was later turned into a screenplay by his son Miles Swarthout as Convictions of the Heart.

Glendon Fred Swarthout was born 8 April 1918 in Pinckney, Michigan, and died on 23 September 1992 in Scottsdale, Arizona. He attended the University of Michigan, where he majored in English and played the accordion for a four-piece band he formed. He married his childhood sweetheart Kathryn Vaughn on 28 December 1940, shortly after they both graduated.

After a year writing ad copy for Cadillac and Dow Chemical at the MacManus, John & Adams advertising agency in Detroit, Swarthout traveled with his wife to South America aboard a small freighter, sending a weekly column back home to various newspapers. After Pearl Harbor, they returned to the U.S. When Swarthout was denied entry to officer’s training for being underweight, the young couple both took jobs at Willow Run bomber plant near Ann Arbor. Within six months, and despite working long hours as a riveter on B-24s, Swarthout had written his his first novel Willow Run, a story about people working in a bomber factory.

In the latter stages of the war, Swarthout served briefly in the U.S. infantry in Europe, but ruptured a disc in his spine and was shipped home. He would be plagued by back problems for the rest of his life. 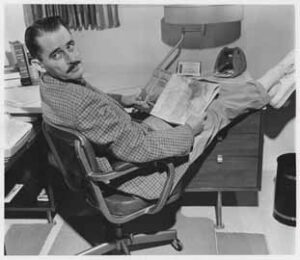 In 1951, Swarthout spent six months in Ajijic with his wife and their young son, Miles, born in 1946. During this time, he worked on another novel, Doyle Dorado, which, in Miles’ words, later “ended up in the stove, making hot water for Dad’s shower.” Swarthout also wrote a short story set at Lake Chapala. Though not published until several years later, “Ixion” was the “semi-autobiographical story of a young advertising man attempting to write his first novel in the little artist’s colony of Ajijic.” 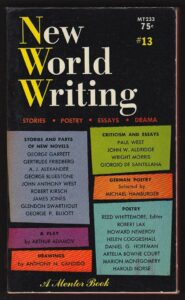 “Ixion” was first published in New World Writing #13 in The New American Library (Mentor, 1958). A contemporary reviewer praised “Ixion” as being a “much worthier” work than Swarthout’s second novel, They Came to Cordura, which had been published a few weeks previously. “Ixion” was later reprinted in Easterns and Westerns (Michigan State University Press, 2001), a collection of short stories, edited by son Miles, who later turned it into a screenplay, Convictions of the Heart.

According to Miles, the family might have remained much longer in Mexico in 1951 (despite his father’s failed attempt at writing Doyle Dorado) if the lake had been clean. “The real reason my parents left Mexico in a hurry was to seek emergency medical treatment in Brownsville, Texas, for five-year-old me, after I’d contracted para-typhoid fever from swallowing sewage water in Lake Chapala.”

Back in the U.S., in 1955 Glendon Swarthout gained his doctorate in English Literature (based on a study of Somerset Maugham, Ernest Hemingway, Joyce Cary and Charles Portis) and began to sell short stories to magazines such as Cosmopolitan and The Saturday Evening Post. One of the first stories he sold (for $2500), “A Horse for Mrs. Custer”, became the Columbia Pictures low-budget western 7th Cavalry, released in 1956.

Swarthout’s next novel established him as a professional writer. They Came To Cordura was published by Random House in 1958 and became a New York Times bestseller. The film rights were sold to Columbia Pictures, whose major movie, starring Gary Cooper and Rita Hayworth, entertained cinema audiences the following year. The book is set in 1916 Mexico during the Pershing Expedition to capture Pancho Villa.

Swarthout’s career took off. His next novel, Where The Boys Are (1960), the first lighthearted novel about the annual “spring break” invasion of southern Florida beaches by college students, was transformed by MGM into a low budget, high grossing movie.

Swarthout was twice nominated by his publishers for the Pulitzer Prize for Fiction (for They Came To Cordura by Random House and Bless The Beasts & Children by Doubleday) and received numerous awards for his work.

He and his wife Kathryn Vaughn Swarthout (1919-2015) co-wrote six young adult novels, several of which were also published overseas. In 1962, the couple established the Swarthout Writing Prizes at Arizona State University, for poetry and fiction, which are among the highest annual financial awards given for undergraduate and graduate writing programs.

Glendon Swarthout died at his home in Scottsdale, Arizona, on 23 September 1992.

This piece is dedicated to the memory of Miles Swarthout (1946-2016) who graciously corresponded with me about his father, via e-mail at an early stage of this project.