Charles William Beebe (Will Beebe, as he preferred) was an American ornithologist, naturalist, explorer and author, born in Brooklyn, New York. He never completed a college degree, but undertook pioneering studies in various fields of ecology, in habitats ranging from high altitude forests (in search of pheasants) to tropical rain forests, coral reefs and the ocean depths. 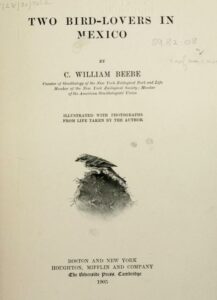 Beebe married his first wife, Mary Blair Rice, in 1902. Two Bird Lovers in Mexico describes their first trip overseas in the winter of 1903-1904, when Beebe was curator of ornithology at the New York Zoological Society.

Beebe went on to become director of the Society’s Department of Tropical Research, undertaking work in dozens of countries, including extended stays in British Guiana (now Guyana), the Galapagos Islands, Bermuda and Trinidad. He inspired an entire generation of naturalists to explore the connections between animals, plants and their environment.

Beebe wrote dozens of books, and hundreds of magazine articles during a prolific career. His nonacademic books (such as Two Bird Lovers in Mexico) popularized natural history, while simultaneously promoting the need for conservation. They brought the sights, sounds, thrills, and perils, of remote places into the homes of armchair travelers everywhere. Among his best-known works are Galapagos (1923), Half Mile Down (1934), and Unseen Life of New York (1953). 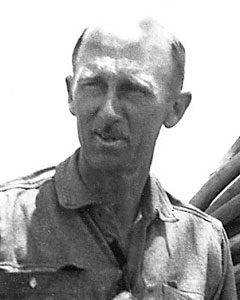 Among Beebe’s many extraordinary achievements was a record descent (with Otis Barton) to 3028 feet (914 meters) below the ocean surface in a bathysphere off Bermuda in 1934.

He also seems to have been the first person to identify the temperature anomalies that are now known as El Niño. More than 88 animal species had been named after him by the time of his death, in Trinidad, on 4 June 1962.

Armed with a shotgun, rifle, and two revolvers, the Beebes arrived in Veracruz in December 1903 and immediately took the train across the country to Guadalajara. They set off to camp on the slopes of Colima volcano, witnessing an eruption there the following January.

The following extracts from Two Bird Lovers in Mexico come from Chapter VI, “The Marshes of Chapala”:

. . . When the marvel of the bird-life of Lake Chapala and its marshes revealed itself to us, the feelings we experienced cannot be put into words; such one feels at a first glance through a great telescope, or perhaps when one gazes in wonder upon the distant earth from a balloon. At these times, one is for an instant outside of his petty personality and a part of, a realizer of, the cosmos. Here on these waters and marshes we saw, not individuals or flocks, but a world of birds! Never before had a realization of the untold solid bulk in numbers of the birds of our continent been impressed so vividly upon us. And the marvel of it all was the more impressive because of its unexpectedness.

A hot, breathless day found our little cavalcade passing the picturesque old cathedral of La Barca, our horses’ hoofs stirring up a cloud of the omnipresent adobe dust. A New England housewife who spends her life in banishing dust from her home could exist in the houses of Mexicans only in a state of insanity. The unfinished adobe walls being nothing but dust in a slightly hardened state, the least touch inside or out removes a film of the earth powder.

. . . We crossed a stream by a rickety wooden bridge, and learned that its waters were the same as those flowing at the bottom of the barranca, crossing the mesquite wilderness. Here we were near the source of the Rio Santiago, where it flows from Lake Chapala. At one side was moored the little stern-wheeler which every other day carries a few passengers down to the lake and through its entire length of fifty miles to the several hotels at the western end.

Along the muddy shallows of the lake can be found numbers of quaint relics of a by-gone race of people. Strange dishes and three-legged bowls, sinkers and buttons, charms and amulets, objects of unknown use, and now and then little smiling idols of stone, whose cheerful expression, perhaps, gave hope to earnest worshippers hundreds of years before the first Spanish priest placed foot upon the shores of the New World.

. . . We in the North have neglected the egrets until well-nigh the last survivor has been murdered; but here in this wild place, where, outside of the towns, a man’s best law and safeguard is in his holster, these birds have already found champions. Short tolerance had the first plume-hunter — an American — who began his nefarious work in the Chapala marshes. The rough but beauty-loving caballeros who owned the haciendas surrounding the lake talked it over, formed — to all intents and purposes — an Audubon Society, ran the millinery agent off, and forbade the shooting of these birds. There was no fine or imprisonment for shooting egrets, — only a widespread verbal “revolver law,” more significant and potent than many of our inscribed legislative enactments.

. . . The air was filled with a multitude of sweet notes, — half strange, half familiar, — and the sight of scores of brilliant yellow breasts, crescent marked, turned toward us, told us that it was a hint of well-known Meadowlark music which puzzled our memory. But this melody was very unlike the sharp, steel tones which ring so true across the frost-gemmed fields of our Northland in early spring. The larks looked very little different from our Northern birds; their backs perhaps darker and their breasts of a warmer, more orange yellow. This genial, tropical air has thawed their voices and softened their tones, and the sweetest of choruses came from the throats of these Mexican Meadowlarks. We passed hundreds upon hundreds of blackbirds, evenly divided between golden-headed beauties and others whose trim ebony forms were richly marked with scarlet and white shoulders — the Bicoloured Blackbirds. Their clucks were continuous, as they walked and hopped about, searching and finding. The half-sodden meadows must indeed have been a limitless storehouse for insects and seeds, since they afforded food for so great a number of birds.

. . . We now came to occasional swampy places with small patches of open water surrounded by higher ground. Blackbirds, and Cowbirds with red eyes, chased grasshoppers and other insects. When an occasional hopper of unusually large size sprang up, a fluttering mass of feathers, scarlet, white, golden, and black would set upon him. But often a low-browed Caracara galloped up, scattering the lesser birds and appropriating the remains of the insect for himself. It was amusing to see how these curious birds seized their small prey in the talons of one foot and lifted it toward their beak, nibbling at it from between their toes, like a cockatoo with a piece of bread.

. . .  Chapala honours us with a final farewell. The sun is sinking in a cloudless sky, a wind rises from somewhere, ruffles the face of the pools and brings the scent of the marsh blooms to us. A small flock of White-fronted Geese passes rapidly overhead, not very high up, when all at once there floats into view cloud after cloud of purest white, stained on one edge by the gold of the setting sun. We dismount and look up until our bodies ache, and still they come, silently driving into the darkening north. The great imperative call of the year has sounded; the drawing which brooks no refusal…

During their trip to Mexico, Beebe and his wife observed and collected hundreds of birds, flowers, grasshoppers and lizards, but seem to have encountered remarkably few Mexicans, except for the ones who piled stones on their railway tracks for a prank. Beebe and Mary Blair Rice divorced in 1913.

One Response to “Charles Beebe described Lake Chapala in 1904”