This early impressionist painting of Lake Chapala by Donald Cecil Totten was offered for sale on eBay in 2015, though it remains frustratingly unclear when the American artist actually visited Chapala. 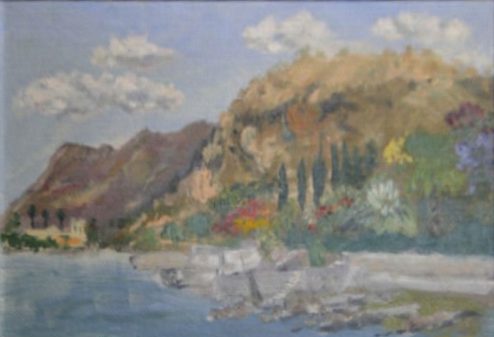 Totten was born in Vermillion, South Dakota, on 13 August 1903, but lived most of his adult life in Los Angeles, California. He died in Long Beach, California, on 29 October 1967.

Totten graduated from Long Beach Polytechnic High School, and then studied journalism for a year at the University of Southern California. He then studied art for about three years at the Otis Art Institute, where his teachers included Edouard Vysekal and E. Roscoe Schrader. In the late 1920s, early 1930s, he took classes at the Art Student League of Los Angeles, where he was especially inspired by American artist Stanton MacDonald-Wright (1890-1973).

In the mid-1920s, prior to studying at the Art Student League, Totten did some international traveling. He is known to have visited Fiji, Australia and Hawaii and is recorded on a ship’s passenger list as returning to Honolulu, Hawaii, from Sydney, Australia, on 11 March 1927, aboard the SS Ventura. His trip to Mexico may well have been at about this time. While Totten’s son recalls that his father enjoyed speaking Spanish, he has no recollection of him ever talking about Mexico.

At the time of the 1930 US Census, Totten (then aged 26) was living with his parents at their home on Colorado Avenue, Long Beach, and working as a clerk in a grocery store (probably the store owned by his father).

During the late 1930s, Totten worked on murals for the Federal Art Project in Pasadena’s Grant School and the Manual Arts High School in Los Angeles, assisted James Redmond on the “Early California” mural (1936) in the Compton Post Office, and co-designed (with Helen Lundeberg) the mural “History of Transportation” (1940) in Centennial Park, Los Angeles. Later in life, Totten would reflect that working on large murals in his early life had led to his enthusiasm in later years for producing large abstract paintings, which he called “portable murals.” 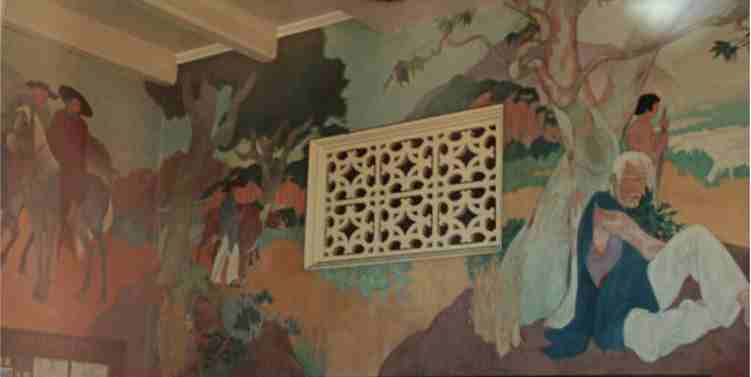 After spending a year in Washington in 1942, Donald Totten married and began a career which combined painting and exhibiting his own work with art education. He taught for a decade at Barnsdall Arts & Crafts Center in Los Angeles, before joining the faculty at Marymount College in Palos Verdes in 1961 to give studio and art history classes. Totten also taught at the University of California at Los Angeles Extension, and at Inglewood Adult High School.

Group shows towards the end of his career included one at the Palos Verdes Art Gallery, with Mel Anderson and Marilyn Prior, in 1963. In December 1963, Totten at a Holiday Art Festival group show at a private home, sponsored by the Mother Butler Mission guild of Marymount College, Totten exhibited alongside Redondo Beach artist Robert Neathery who subsequently lived at Lake Chapala for more than thirty years.

Totten’s final solo exhibition was at the Santa Barbara Museum of Art (1964). A retrospective of Totten’s art, organized by Leslie Baird, was held at the Esquire Theatre Gallery in Pasadena in November 1964, shortly after the artist had suffered a severe stroke. A second retrospective,“Don Totten Los Angeles Modernist”, was held at the Palos Verdes Art Center in 1997.

Totten’s mural work can be seen in the Holliston Methodist Church, Pasadena; his paintings are in many private collections.

My thanks to Julia Armstrong-Totten, the daughter-in-law of Don Totten, for helping to sort out the likely period when this painting was completed, via an exchange of emails and messages in January 2016.

Other Lake Chapala artists with links to the Works Progress/Projects Administration (WPA; 1935-1943) include: