Blair Niles (1880-1959), as she is best known, was formerly Mary Blair Rice, the first wife of naturalist and oceanographer Charles Beebe. The Beebes visited Mexico (and Lake Chapala) over the winter of 1903-1904. As Mary Blair Rice, she contributed the cover design to Beebe’s book Two Bird Lovers in Mexico (which is dedicated to her) and wrote the chapter entitled “How We Did It”. As they camped their way across Mexico, she also wrote several articles about the trip for the New York Post and Harper’s.

In “How We Did It”, she offered the following advice for future female explorers in Mexico:

“To the woman who is courageous enough to defy the expostulations of her friends and to undertake a camping trip to Mexico, let me say that I congratulate her on having before her one of the most unique and fascinating experiences of her life; that is if she goes in the proper spirit. And the proper spirit is to be interested in everything and to have one’s mind firmly made up to ignore small discomforts.” 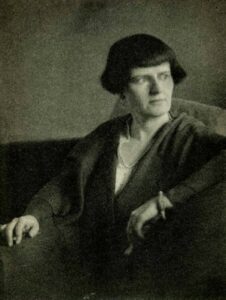 Blair divorced Beebe in 1913, marrying architect Robin Niles (Beebe’s next door neighbor) the very next day. She subsequently changed her name to Blair Niles, and had a distinguished career as a travel writer and novelist, as well as being one of the four founding members of the Society of Women Geographers.

In addition to travel books on Ecuador, Columbia, and Haiti, she also wrote Strange Brother, a novel with a homosexual hero, and Condemned to Devil’s Island: the Biography of an Unknown Convict, which was turned into one of the first talking movies of all time.

An ardent traveler, Blair Niles died in 1959, leaving behind a remarkable legacy of books, and having had a significant impact on 20th century feminism.