One of these book, Stages in a Journey (1983), includes accounts of two trips from Chapala to Ajijic – the first by car, the second by boat – made on two consecutive days in March 1946. In chapter 3, Parmenter describes how local campesinos raised water from the lake to irrigate their fields on the shores of Lake Chapala in 1946:

[Later] we moved further ashore to watch the men bailing up water for the fields. At Mr. Johnson’s [in Ajijic] we had seen nothing of his irrigation system. I am sure, though, that it achieved greater results with less labor. But if more up-to-date, I doubt if it was more pictorial. The men’s system reminded me of slides I had seen as a boy at Sunday school, for these Mexicans were irrigating their fields in the same way as the Egyptians had watered theirs 2,000 years before the birth of Christ. 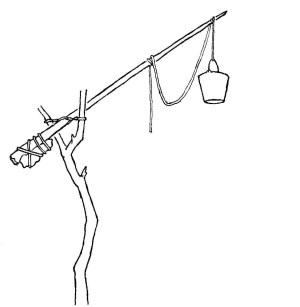 The system required three men. The first transported the water from a little inlet in five gallon gasoline cans which he carried, hanging like scales, from either end of a pole across his shoulders. The second man, on an improvised platform, operated the hoist. And the third one saw that the lifted water got into the sluice that drained to a field of squash.

Lacking the resources of a British engineer, the men had created their machinery from what was available. For the upright to support the hoisting lever they were using a willow, whose two main boughs forked about ten feet above the ground. The fulcrum consisted of a couple of lengths of rope braided and stretched taut across the arms of this natural Y. The lever itself was the peeled trunk of a slender tree, which was forced most of the way through the ropes. To compensate, for the excessive length of pole on one side of the fulcrum, the butt end was weighted with a big stone. This working beam set up in the treefork was controlled by a rope at its tip. From its tip, too, dangled a bucket.

When the operator hauled the beam down, the watercarrier would fill the lowered bucket from one of his cans. Then the operator would slacken his hold of the tug rope and the counterweight of the stone would lift the brimming pail. Brought level with the large funnel at the entrance of the sluice, the bucket would be tipped by the third man so the water spilled into a tin pipe. The pipe carried the water to a sloping channel, which, like almost everything else, was homemade. It consisted of boards placed together in a V and supported along their length by crotched sticks.

Like the fisherman we had seen casting his net, these men were wearing straw hats and had their pants rolled above the knees. They were unhurried and worked in easy rhythm, with the man at the hoist pulling on the rope as if he were ringing a church bell. There was little sound except the creaking of the cross-ropes as the beam was tilted back and forth, and that high-pitched creaking was not unlike the piping of the birds singing in the fields and trees. (100-102)