Ajijic first bloomed into a center for art and artists in the 1940s. By the end of that decade, the village boasted at least one gallery, and several entrepreneurial artists were involved in offering seasonal art classes, initially for summer visitors from the U.S.

During the 1950s, word-of-mouth gradually spread Ajijic’s “fame” as an artistic center. One of the many attractions offered by Ajijic for artists was that it was inexpensive, especially compared to prices north of the border. 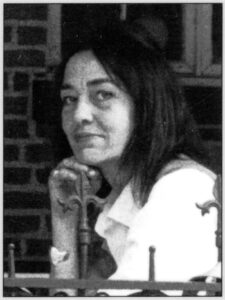 Among the couples attracted in part by Ajijic’s affordability were Regina de Cormier Shekerjian (1923-2000), a well-known poet, author, translator and illustrator of children’s books, and her husband, Haig Shekerjian (1922-2002), a photographer.

They first visited Ajijic when Haig took a sabbatical over the winter of 1950-51 and they spent several months living in the village. They returned frequently thereafter, including numerous times in the late 1970s and early 1980s.

Regina contributed to boosting Ajijic’s popularity as an arts center by writing one of the earliest articles dedicated to extolling its virtues to the art-loving public north of the border. In 1952, when one U.S. dollar was worth 8.65 pesos, in an article entitled “You can Afford a Mexican Summer,” she explained why Ajijic was the ideal location for an inexpensive art-themed summer break:

Nine times out of ten, an artist pinches pennies. Nowhere in the world can a penny be pinched as hard as it can today in Mexico, a land intended for the artist.

Mexico is filled with color. Purples, pinks, red and orange. Color in a high key, layered through with dun-colored space and fingered with tall blue mountains. A checkerboard of tonal dissonance and silence. A strange land. Every era of civilization co-exists, side by side, Aztec temples, pyramids and medieval cities, beautifully preserved. Pre-Columbian idols can be unearthed along the lake shore or mud edge. Its rural villages are much as they were before the Conquest. Ancient superstitions tangle with Catholicism, producing a pageantry that begs to be painted.

– – –
Having lived on a strict peso budget for four months now in the tiny town of Ajijic (pronounced Ah-hee-heek) we have discovered it is possible for two people to live comfortably in a five-room-with-patio-and-garden house; buy food, ice, kerosene for the stove, gas for the car, art and photographic supplies, postage, cigarettes, have lunch once a week in Guadalajara (forty miles way) and even indulge in a bit of entertaining for about $70 a month! Ajijic, I must point out, is more expensive than many other small villages. It is perfectly possible to get both board and room for eight or twelve pesos a day. Many people do it, for there are many places still where the Mexican is as yet unaware of what the present ration means. Even the houses in Ajijic (big, cool, adobe houses with gardens of tropical flowers and all kinds of fruit trees) rent from six to twelve dollars a month. And a servant who will cook, clean, shop, and wash and iron your clothes (leaving you free to paint) can be had for the standard wage of $5 a month. We spend eight pesos a day – a trifle less than a dollar for food, ice and kerosene. And this includes meat everyday for three hearty appetites, ours and a big Airedale’s.

For companionship in our particular village you will find an assortment of writers, artists and musicians, that reminds you, naturally, of Greenwich Village. Some have been here two or three years, returning at the end of each six months to renew their tourist cards, then hurrying back to finish a project. Others are teachers on summer vacation.”