Baxte and his wife were near neighbors in Mexico City of Helen Kirtland and her family. After her marriage ended, Kirtland moved to Ajijic with her three young children and founded Telares Ajijic. Her only daughter, Katie Goodridge Ingram, author of According to Soledad, a memoir about her childhood in Mexico City and Ajijic, has clear memories of Baxte and Mège visiting Ajijic over the winters of 1945 and 1946, where they shared a “cottage” owned by Louis Stephens, a mutual Mexico City friend. 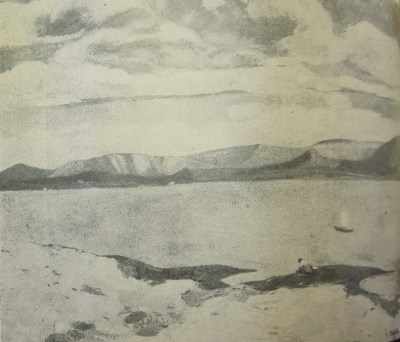 Michael Posner Baxte was born in Staroselje, Belarus. His family emigrated by parts to the US at the start of the 20th century. Michael and his mother joined his older brothers there in 1907. Michael later went to stay with an uncle, an accomplished violinist who lived in Mississippi. Recognizing his musical talents, the uncle sent Michael to violin classes in New Orleans. Michael then took master classes in Paris and later Berlin, where he was a student of the famed Hungarian violinist Joseph Joaquim.

After Europe, Baxte settled in New York City in 1914 to compose, perform and teach. His musical compositions were performed at the Tokyo Imperial Theater, and he was a prominent member of the American Jewish community.

It was in New York that he fell in love with painter Violette Mège. The couple briefly visited Mège’s homeland of Algeria before settling in Manhattan, New York, where they married in 1920.

Inspired by his wife, Baxte began to paint. Mège was his only teacher, and he was her only student. Her classes and encouragement paid off a decade later when Baxte was chosen as one of the two winners in the Dudensing National Competition for American Painters. Baxte also exhibited with the Society of Independent Artists, Salons of America and at the Whitney Museum of American Art. 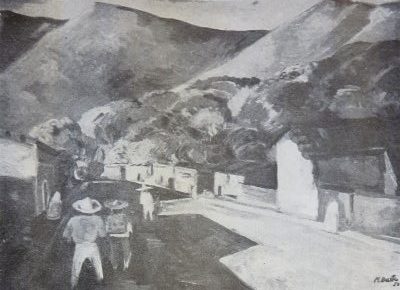 Lloyd Goodrich, a New York Times critic, wrote in 1929 that “Mr. Baxte… is an artist of considerable subtlety, not too strong perhaps, and sometimes a little uncertain, but always sensitive and interesting. One feels in each of his pictures an absorption in his subject and an individual manner of looking at it. He has a very attractive color sense, warm, sensuous, and unexpected, which seems natural and unforced.”

For the next decade, Mège devoted herself to teaching her husband to paint and helping him refine his techniques. According to a 1930 newspaper account, she rarely painted during this time.

During the 1930s, the couple lived in Paris, France, where Baxte exhibited his artwork at the government-sponsored Salon d’ Automme.

They left France when the second world war began and, by 1941, had moved to Mexico, where Mège and her husband had a home (later owned by Rufino Tamayo) in Coyoacán. They traveled to various parts of Mexico and many of Baxte’s paintings are of landscapes and people in Michoacán and elsewhere in western Mexico. For example the December 1942 issue of Mexican Life included images by Baxte entitled “Village in Michoacan”, “First communion (portrait)”, “Portrait of an Indian girl”, and “Pueblos Street”. 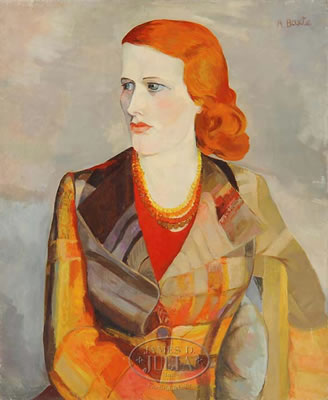 Michael Baxte. Redhead in plaid. (Auctioned by Treadway Tooney in 2015)

In 1946, Baxte’s oil painting “Paisaje de Tenancingo” was included in a major exhibition of paintings of flowers at Mexico’s 5th National Floriculture Exhibition and 4th Flower Show (“Salón de la Flor”). Also showing on that occasion was Otto Butterlin, who had moved that year with his family from Mexico City to Ajijic.

Another article in Mexican Life, in 1952, when Baxte was showing at Galeria de Arte Mexicano, included images entitled “Uruapan”, “Charo”, “Village in Jalisco”, “Valley of Mexico”, “Oaxaca landscape” and “Lake Chapala”. His paintings have been described as modernist-leaning landscapes and portraits.

In 1954, Baxte and Mège both had paintings included in an exhibition of 20 non-Mexican artists from 12 regions of Mexico at the Salón de la Plástica Mexicana in Mexico City. The El Nacional’s art critic was less than generous in his appreciation of the couple’s work, writing that though “the works of Mège and her husband display some well-observed Mexican aspects,” neither “had a strong sense of color.”

None of this deterred Baxte from describing himself as an “artist of international renown when announcing, via a display ad in Mexican Life,  “the opening of his new studios at Calzada Mexico-Tacuba No 16 (corner of Melchor Ocampo) where he will be pleased to accept a limited number of endowed pupils for guidance and technical reconstruction.”

In 1957, Baxte had a solo show, mainly of landscape paintings, at the Salon of International Friendship of Mexico City’s Palacio de Bellas Artes.

Baxte died in Mexico City in 1972. A posthumous retrospective of his work was held the following year at the Galería Tusó in Mexico City.

2 Responses to “Michael Baxte painted in Ajijic in the 1940s”