Mège and her husband were near neighbors in Mexico City of Helen Kirtland and her family. After her marriage ended, Kirtland moved to Ajijic with her three young children and founded Telares Ajijic. Her only daughter, Katie Goodridge Ingram, author of According to Soledad, a memoir about her childhood in Mexico City and Ajijic, has clear memories of Mège and Baxte visiting Ajijic over the winters of 1945 and 1946, where they shared a “cottage” owned by Louis Stephens, a mutual Mexico City friend. 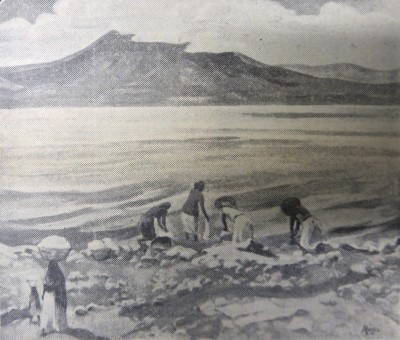 Violette Clarisse Mège (or variants Mege and Mége) was born in Algeria in 1889. When she became the first woman to win a prestigious Beaux Art competition in Algeria in 1914, the organizers only awarded her the scholarship after the French government intervened on her behalf.

Mège had work exhibited in a group show in Paris in 1916 at the Latin Quarter Association. After winning the Beaux Art scholarship for a second time, she decided to broaden her horizons and used the prize money to travel to New York with her younger sister, Emma, in 1916.

Her New York trip proved to be a pivotal moment in her life. She fell in love with Michael Posner Baxte, an up-and-coming violinist and composer. The couple briefly visited Mège’s homeland before settling in Manhattan, New York, where they married in 1920.

Mège held a solo show of her paintings at The Touchstone galleries in New York in 1917. A critic described this as “an exhibition of singular attraction by a very bold student of color, Violet Mege, an Algerian who paints her native land, showing rich color effects where light is not toned by shadow, her shadows being almost negligible in values. Her figure work is good, especially in the portrait of a woman and a violinist.” The violinist was, presumably, Michael Baxte. 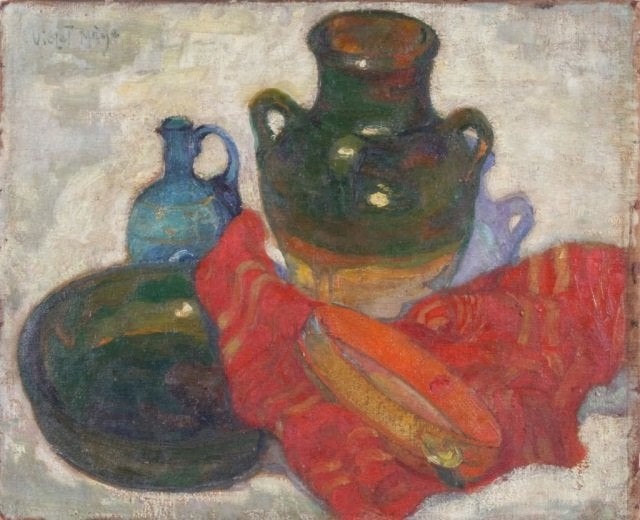 Her work was also praised in a group show the following year at the Macdowell Club: “The spirit of the manners and customs, as well as the costumes of the strange people pictured by her is quaintly and withal pleasingly worked out. Sometimes her work halts before it should, but is particularly noteworthy in its freshness and excellent coloring. Miss Mege is not always so good in her rendering of flowers.”

Mège had paintings of Algeria and of a Cypress tree in New York included in the Third Annual Exhibition of The Society of Independent Artists at the Waldorf Astoria in New York in 1919.

Inspired by his wife, Baxte began to paint. Mège was his only teacher, and he was her only student. Her classes and encouragement paid off a decade later when Baxte was chosen as one of the two winners in the Dudensing National Competition for American Painters.

For the next decade, Mège devoted herself to teaching her husband to paint and helping him refine his techniques. According to a 1930 newspaper account, she rarely painted during this time, and it was only after her husband’s work was widely acclaimed that she “she picked up her palette and brushes where she had laid them down on marriage.”

In 1930 she held a solo exhibit at the Delphic Studios in Battle Creek, Michigan.

The couple lived in France during the 1930s. They left when the second world war began and, by 1941, had moved to Mexico, where Mège exhibited her paintings, including a portrait of her husband Michael Baxte and several of Michoacán, at Galeria de Arte y Decoración the following year. Mège and her husband had a home (later owned by Rufino Tamayo) in Coyoacán and traveled to various parts of Mexico. Many of their paintings show landscapes and people in Michoacán and western Mexico.

As in the case of her painting “Lavandera de Ajijic”, exhibited in Mexico City in 1954 and reproduced in El Nacional, Mège often signed paintings using only her surname. This painting was shown, alongside work of her husband, in an exhibition of 20 non-Mexican artists from 12 regions of Mexico at the Salón de la Plástica Mexicana in Mexico City. The El Nacional’s art critic was less than generous in his appreciation of the couple’s work, writing that though “the works of Mège and her husband display some well-observed Mexican aspects,” neither “had a strong sense of color.”

My thanks to Katie Goodridge Ingram for sharing her memories of the artist with me.